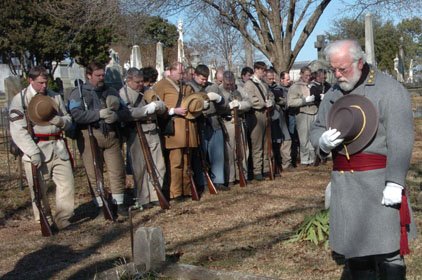 W. Danny Honnoll (right) leads a prayer Saturday at the grave of David O. Dodd, who was executed by Union troops for being a Confederate spy.

LITTLE ROCK — A 17-year-old boy hanged by Union troops for spying during the Civil War was a hero, a leader of the Sons of Confederate Veterans told a small crowd gathered Saturday in Little Rock’s Mount Holly Cemetery.

Mark Kalkbrenner of White Hall gave a brief speech about the legacy of David O. Dodd, the boy who was executed on Jan. 8, 1864, after being found with information on Union troop strength in Little Rock.

Dodd never gave up any names of other spies and his death was a brave one, said Kalkbrenner, commander of the Arkansas Division of the Sons of Confederate Veterans.

Kalkbrenner compared Dodd’s actions with those of Nathan Hale, a Revolutionary War hero hanged for espionage by British troops in 1776.

“They both did what they thought was right,” Kalkbrenner said.

“Look around you at all those serving now,” he told about 50 people, about half of whom were dressed as Confederate soldiers or in other forms of period dress. Others were heavily bundled against temperatures in the mid-20s.

After the speech, Kalkbrenner said he was referring to heroes in all walks of contemporary life, including U.S. soldiers serving in Iraqand Afghanistan.

Scott Treadwell of Little Rock attended the 30-minute ceremony with his 15-year-old son, Dylan, who was a re-enactor, and two daughters, 13-year-old Kara and 7-year-old Kadie.

Treadwell said he wasn’t aware of the Dodd story, but Kara knew it.

“He was very loyal and brave,” she said.

Often dubbed the “Boy Martyr of the Confederacy,” Dodd was arrested in 1863 after he tried to cross Union lines into Confederate territory. Union soldiers who searched him found, in a notebook, a page written in Morse code containing informationabout the Union’s strength in Little Rock, according to one account.

Dodd was arrested on suspicion of espionage. He remained silent about who had given him the information, saying only, according to accounts, “I can die for my country, but I cannot betray a friend.”

W. Danny Honnoll, a colonel in the 30th Arkansas Infantry Regiment, Army of the Trans-Mississippi, a re-enactment group, told the crowd after three volleys of shots fired near Dodd’s grave, that they had “heard the sounds of war here today.”

Honnoll, a Jonesboro resident, said Confederate women had decorated the graves of Union soldiers during the Civil War because “they were still human beings that needed to be honored.”

Honnoll led the crowd in a rendition of the song “Dixie,” which he noted had been written by a “Yankee.”

“We have done our duty here today,” Honnoll said.