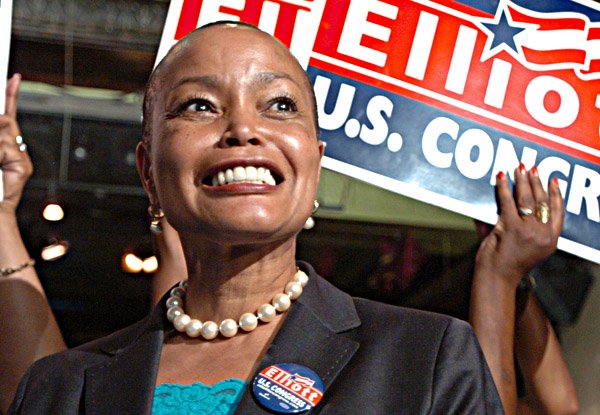 State Sen. Joyce Elliott all smiles after keeping the lead in the Democratic Primary run-off in the 2nd Congressional District on Tuesday night.

With all 399 precincts reporting, the unofficial results were:

Wills won seven of the district’s eight counties, but Elliott carried the most populous one, Pulaski, by a large enough margin to offset Wills’ lead in the others.

“This is such a great moment,” a beaming Elliott told her supporters.

She credited her victory to their hard work spreading her message.

Was there a backlash against Wills campaign mailers that she had called inaccurate distortions?

She said she didn’t know.

“I just had to work that much harder to make sure people knew the truth about my record,” she said.

Elliott had a cordial conversation with Wills, and he offered to help her in the general election, she said.

Griffin said he looks forward to “an issue-based campaign.”

Her plan is to put together “a tighter strategy” for all of the district’s counties and run on her record as a schoolteacher and lawmaker who wants to continue working to improve education and health care and create jobs, Elliott said.

Wills told his supporters that he congratulated Elliott on a well-deserved victory. “Now it’s up to all of us to help Sen. Elliott in that endeavor,” he said.

The left-leaning Snyder, 62 and a Democrat from Little Rock, has held the seat since 1997.

Elliott is black and Wills is white. Arkansas has never elected a black to Congress. Race was never an issue in the campaign.

In the May 18 preferential primary, Griffin defeated restaurant owner Scott Wallace of Little Rock, receiving 24,597 votes to Wallace’s 15,275, according to the state’s still-uncertified results.

Griffin, a conservative, has said his votes in Congress will differ from Snyder’s and that he will be Snyder’s “polar opposite” in many ways.

Elliott, widely regarded as part of the political left, and Wills, who has called Elliott “extreme” in her views, led a five-way Democratic race May 18, Elliott getting 30,370 votes to Wills’ 21,290, according to the uncertified results. Again, he led in seven of the eight counties, but she bested him strongly in the most populous one, Pulaski.

Wills spent more than twice as much as Elliott through May 18.

His latest contributors include the Southwestern Energy Co. Political Action Committee, Deltic Timber Corp. President Ray Dillon, and the National Education Association Fund for Children and Public Education. Her latest include the Communications Workers of America; the American Postal Workers Union Committee; and Baker Kurrus, president of The Winrock Group.

The runoff campaign became more edgy when Wills described Elliott in mailers and interviews as too extreme to win in November. Elliott said Wills was “desperate” and was “distorting” her record.

In one mailer, he contended she “restricts” Second Amendment rights, wants to outlaw school prayer, and favors allowing underage girls to get abortions without informing their parents.

Elliott disputed each point and called the mailer “an inaccurate portrayal of my views and my values.”

In a subsequent television ad, she took a dig at Wills for supporting a briefly considered $1.8 million plan to build a tunnel between the state Capitol and a state building west of the Capitol so legislators and staff could move back and forth without being exposed to the weather.

A former teacher, Elliott began her campaign in February by saying she would strive to balance the interests of competing factions such as Wall Street and Main Street, community banks and big banks, homeowners and lenders. She said her top priorities would be to support policies to create jobs, improve the health-care legislation enacted by Congress, help states provide a world-class education, and reduce the federal deficit.

She was in the state House of Representatives from 2001-2007, the last two years as chairman of the House Education Committee, and has been in the Senate since 2009, where she is the leader of the Senate Democrats.

In 2005 and 2009, the state Senate rejected Elliott’s legislation to allow the children of illegal aliens to pay the cheaper tuition rates that Arkansas citizens pay at state-supported colleges and universities. Wills voted for the 2005 version of Elliott’s legislation, backed by then-GOP Gov. Mike Huckabee.

Wills, an attorney, started his campaign by pledging to be “a do-something” in Congress and take “our Arkansas values” to Washington.

Wills has pitched a plan to create jobs and get the economy on track by, among other things, providing incentives for private industry to develop a distribution network for compressed natural gas and biofuels, and creating incentives for small businesses to hire employees.

He was the only Democratic candidate among the five competing for their party’s nomination to not say he would have voted for the health-care overhaul legislation enacted by Congress. Wills said he could have voted for it if he had commitments from congressional leaders and President Barack Obama to extend the enhanced federal match for Medicaid in the economic stimulus package for two years, to pay 100 percent of the cost of the program expansion and double funding for community health centers.

Elliott said she wants to address small businesses’ concern about whether they can afford the law’s requirements, provide more competition by allowing the purchase of health insurance across state lines, and address the cost of health insurance coverage.

Both said they wouldn’t vote to repeal the health-care law.