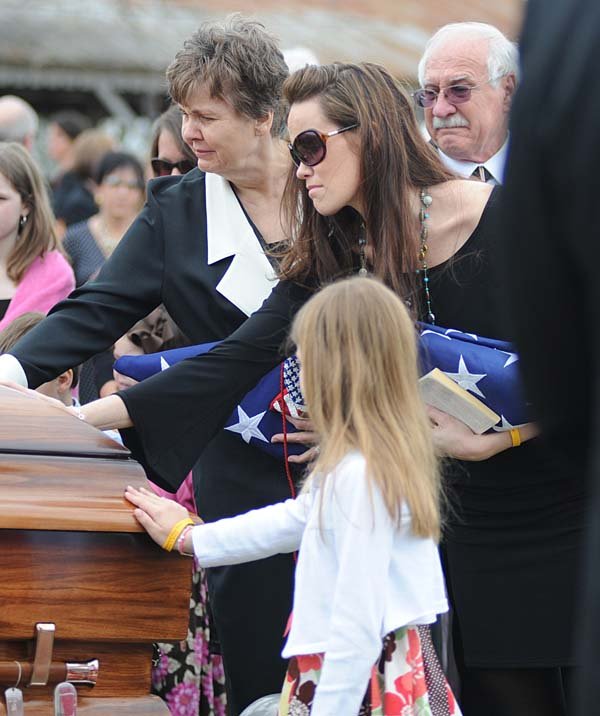 Brown, a special warfare operator, was in one of those battles on St. Patrick’s Day, and died defending fellow U.S. Navy SEALs against a heavily armed Taliban force somewhere in Afghanistan.

SEALs are the U.S. Navy Special Operations Command’s highly trained and covert fighting force. Brown enlisted in the Navy in 1998 and became a SEAL in 2000 - after nearly two years of training.

Faas escorted Brown’s body home to Hot Springs from Afghanistan. Brown, 36, was memorialized Wednesday at Hot Springs Baptist Church and buried in a quiet cemetery in the hills west of town.

He is survived by his wife, Kelley; his son, Nathan; daughter Savannah, all of Virginia, where he was stationed; his parents, Larry and Janice Brown; his sister, Manda; and brother, Shawn.

Since the beginning of the wars in Iraq and Afghanistan, 82 Arkansans have died in the war zones, including 65 who died as a result of enemy fire.

Brown was the third Arkansan to die in battle in Afghanistan this month.

On Wednesday, fellow sailors and SEALs traveled to Hot Springs to honor Brown and support his family at his funeral.

“Adam, we miss you, brother,” Faas said. “We miss your smile and your crazy eye. ... In the days to come, we will miss your tirelessness and fearlessness under fire.”

Brown’s “full throttle” personality and dangerous job resulted in several injuries over the years - all of which he overcame - from the loss of an eye to reconstructed ankles and knees and near-amputation of all fingers on one hand.

“Adam was the hardest man that I have ever met,” he said. “And in true SEAL fashion, he would not quit. He would notgive up.”

Only a few know of the work Brown did. The rows of ribbons on the uniform he was buried in tell part of the story - one filled with combat and courage. Medals for valor are only awarded for heroic actions under fire.

Heath Vance, one of Brown’s childhood friends, told the crowd that Brown’s courage was only one side of a complex man who balanced his life with faith.

“Most importantly, his love and commitment to his family should serve as an example to all men,” he said, fighting tears that wouldn’t stop. “Adam poured his soul into getting the most out of life.”

Brown was known for his kindness and compassion as much as he was for his toughness and fearlessness.

“He will always be my best friend,” said Lt. Cmdr. Jeff Buschmann, who lives with the Browns in Virginia and also grew up with Brown in Hot Springs. “Adam was the toughest man I ever met. ... He was the most selfless person I ever met.”

A slideshow played on bigscreen televisions, showing Brown sleeping with his infant daughter on his chest. As the pictures of the family rolled by, his daughter started to wail. The SEALs and sailors filling several rows in the chapel began tobreak down, one by one.

Faas looked out at Brown’s parents, sitting before the flag draped coffin, and spoke of Brown’s deep and unwavering Christian faith.

“He is an example to all of us,” he said of Brown’s unit, Gold Team, 2nd Special Warfare Group.

Then he looked at Brown’s widow.

“Kelley, Adam was our brother. You are our sister,” he said. “We will support your every need, great or small.”

And then he promised Brown’s young children he would tell them the stories of their father when the time is right. To tell them what Brown accomplished, who he was and what he meant to them.

Then he looked out at his fellow SEALs in the crowd.

“Tomorrow we avenge him,” he said, adding that they would dispatch the enemy to “hell’s doorstep.” A list of Arkansas-related war deaths can be found at www.arkansasonline.com/warcasualties/.