Return to the fold

St. George’s Anglican Church in Rogers takes a first step in uniting with the Roman Catholic Church. by Christie Storm | November 6, 2010 at 4:19 a.m. 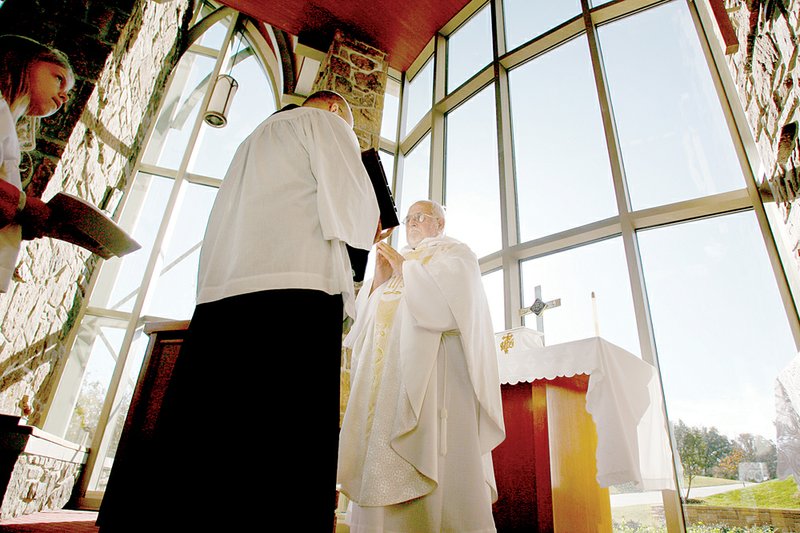 Bobby Hall, priest of St. George’s Anglican Church in Rogers, reads from a Bible held by lay leader Bob Stockand during Mass on Sunday. The congregation, which is affiliated with the Anglican Church in America, is seeking entrance into the Roman Catholic Church.

ROGERS — The congregation of St. George’s Anglican Church has voted overwhelmingly to become Roman Catholic. The action was taken in response to the Apostolic Constitution written by Pope Benedict XVI which extends a welcome to all Anglicans interested in full communion with the Vatican.

The vote by the Rogers church is the first step in a reunification with the Holy See, said Bobby Hall, priest of the parish.

By entering into full communion, the parish will enjoy sacramental unity with the Roman Catholic Church but will retain its Anglican identity and liturgy.

The congregation of 28 parishioners is a member of the Anglican Church in America, which is part of the Traditional Anglican Communion and not recognized by the Archbishop of Canterbury.

It is also not part of the Episcopal Church, the American branch ofthe Anglican Communion.

The Anglican Church in America has about 100 parishes across the country but only one in Arkansas. Individual parishes can make the decision to ally themselves with the Roman Catholic Church if they wish, Hall said.

“A lot of people have been very comfortable where they are at,” Hall said. “They know things are not going well for Anglicans as a whole but they don’t want to step into the unknown. They want someone else to go forward and open the door.”

St. George’s is doing just that.

“When we came under the fold of the Anglican Church in America, we knew very well if the opportunity presented itself we would definitely move in this direction,” Hall said.

James Wiseman, a Benedictine monk and professor of spirituality at the Catholic University of America in Washington, said the pope’s decision to welcome Anglicans into the church wassomewhat controversial.

“Some felt it was a kind of poaching,” he said. “But I’m quite willing to believe the Catholics in the Vatican who say they were approached by many of these groups, and are simply trying to respond to something that was not their initiative. There is a lot of unhappiness.”

Wiseman said mot Catholics in the pews may not even be aware of the Apostolic Constitution and what it will mean for the church. What’s important for Anglicans, he said, is they will be able to retain their rich liturgical traditions while also being part of the Catholic Church.

“What it’s showing is there’s a kind of big umbrella, and becoming a member of Catholic Church doesn’t necessarily mean total uniformity in all respects,” he said. “We are able to accommodate a lot of different expressions of worship under the one tent.”

Hall said the official invitation from the Vatican is something many traditional Anglicans have been waiting for since King Henry VIII and the Church of England split with Rome in the 16th century. Hall said over the centuries Anglicans have made advances toward Rome to reconcile differences but politics often got in the way. The latest gesture was made in 2007 when the leaders of the Traditional Anglican Communion gathered in England and drafted a request of the Vatican.

“They asked, ‘How can we come into communion with the church of Rome?’” Hall said. “Pope Benedict, being the ecumenical person he is, reached out his arms very lovingly and said, ‘Welcome home.’”

St. George’s Anglican Church was established in 2004 by individuals who had been members of the Episcopal Church. Some wereunhappy about the church’s decision to ordain women as priests. Others objected to the changes to the Book of Common Prayer, a 16th-century collection of liturgies, prayers, Psalms and devotions that has been revised repeatedly over the years, most recently by the Episcopal Church in 1979.

“The crowning fracture was, of course, the ordination of an openly gay individual as a bishop in the church,” Hall said. “This has caused a schism.”

The small group began meeting in homes for evening prayer and Bible study. With the assistance of a former Catholic priest they soon began having Mass once a week. Hall said the congregation realized they needed their own leader, so Hall began studyingfor the diaconate. After three years of study, he earned a master’s of divinity degree and was later appointed a priest in the Anglican Church in America.

For now the congregation must wait while Anglican and Catholic officials work out a few logistical matters. The Anglo-Catholic parishes will eventually be grouped in territories much like the dioceses within the Catholic Church and will exist alongside their Catholic counterparts yet function separately with their own local and regional leadership. Hall said he hopes this will be accomplished by the end of the year. The process is being led by Archbishop Donald W. Wuerl of Washington, D.C. who was appointed by the pope to act as a liaison for Anglican parishes in the United States expressing an interest in joining the church.

Bob Stockand, a member of St. George’s, comes from a long line of Anglicans. His ancestors were Anglicans in England before traveling to America where they continued to follow the faith. For him, the changes to the 1928Book of Common Prayer in the late 1970s were unacceptable.

“We believe we don’t have the ability to alter the creeds given to us by the church fathers,” Stockand said. “Playing with that stuff is playing with fire.”

Stockand says the old prayer book is a tradition he wants to pass on to his children and grandchildren, and he says he will be able to do so even while under the umbrella of the Catholic Church.

“It preserves my missal and traditions,” he said. “These are the same prayers my grandfathers and great-grandfathers used. ... I get comfort from that.”

Hall said the next step for the church is simply to grow and attract more likeminded Anglicans who wish to join the Catholic Church.The congregation has already taken one small step in its relationship with the Catholic Church. With the approval of Bishop Anthony Taylor of the Catholic Diocese of Little Rock, they are gathering for weekly Mass at St. Mary’s Chapel inside Mercy Medical Center in Rogers. The congregation had been meeting in a rented home in Bentonville.

“He didn’t want to put us in a Catholic parish at this time because there might be some confusion,” Hall said. “So he offered us the beautiful chapel in the medical center.”

For Hall, the decision to join the Catholic Church is like coming home.

“I tell my parish we are Catholic. King Henry never stopped being a devout Catholic,” he said. “The Eucharist, the holy orders, confessions, we practice them all.”

Print Headline: Return to the fold