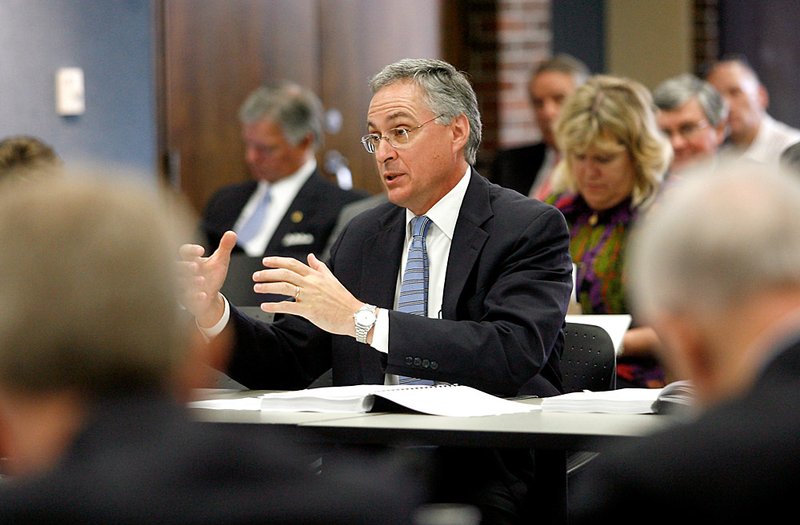 That bond issue would allow UAMS to:

Finish the ninth floor of the new hospital building,providing additional bed space that is estimated to generate $1.2 million of additional annual revenue. The hospital now has 436 beds.

Finalize the purchase of Ray Winder Field, the former minor league baseball stadium of the Arkansas Travelers, as previously approved by the UA trustees.

Upgrade the central energy plant with heat-pump chiller technology now used in the West Central Energy Plant. The increased efficiency would save an estimated $3.5 million a year.

Taking on more than $52 million in debt to finish facility upgrades is on top of $285 million in total debt UAMS already has.

The projects are interconnected because improvements made to the energy plant and expanding the hospital will free up or create nearly $5 million in revenue to pay on bonds, Rahn said.

The annual payment on the bond is estimated at $3.8 million, he said.

“We don’t think there will be a more favorable time for this debt,” Rahn said.

And the projects are badly needed, he said.

Now that the UA board has approved the bond issue, the Arkansas Higher Education Coordinating Board will meet Monday to consider its economic feasibility.

The state’s only medical school has seen an 8.9 percent increase in the number of patients since its new hospital opened last year, said Dan Riley, hospital chief financial officer.

The hospital stays between 90 percent and 95 percent full, and the wait time is longer than it should be, said Dick Pierson, executive director of the hospital and head of the clinical programs.

Patients have been placed in the emergency department or the post-anesthesia care unit because hospital rooms are unavailable.

“We’re continuing to run at about 95 percent capacity, and that stresses the system, quite frankly,” Rahn said.

To fix the problem, officials plan to finish out the ninth floor of the new hospital, expanding earlier than previously planned and finishing out the hospital. No more floors at the new hospital will be available once the project is done, UAMS spokesman Leslie Welch Taylor said.

The increase in beds is expected to mean a rise in revenue for UAMS, which gets 70 percent of its revenue from the clinical services.

The institute draws about 120,000 patients annually from every state and 40 countries, Taylor said.

Energy efficiency improvements to the Central Energy Plant System make up nearly half of the multimillion-dollar bond issue, with a total projected cost of $21.9 million.

Up to $12 million of that might be covered by an Arkansas Building Authority loan, on which interest cannot exceed 3 percent, said Melony Goodhand, vice chancellor of finance.

Should UAMS be awarded the loan, the bond will be reduced, Goodhand said.

UAMS is unlikely to get the total $12 million, but could see $6 million to fund new technology and more efficient heat-pump chillers at the plant, she said.

The bond also includes a $2 million fee for the bond, a $9.1 million project for surgical rooms, $1.3 million for the purchase of Ray Winder Field and other capital improvements.

Trustees previously approved $3.5 million to buy Ray Winder Field last year for the hospital’s future expansion, but university officials are still negotiating for a portion of the property that is state-owned.

The bond issue will add to the university’s $285 million in total debt, which equals about 2 percent of its budget, Goodhand said. UAMS pays about $19 million in annual payments on loans that have a life span of between 10 and 30 years.

Trustees said Friday that they are comfortable with the projects UAMS has put forward and the debt the university plans to take on. Rahn said the projects the bond issue will pay for will prepare the institution for changes in health care.

“We need [this] because the hospital has been full for the last year,” Rahn said.