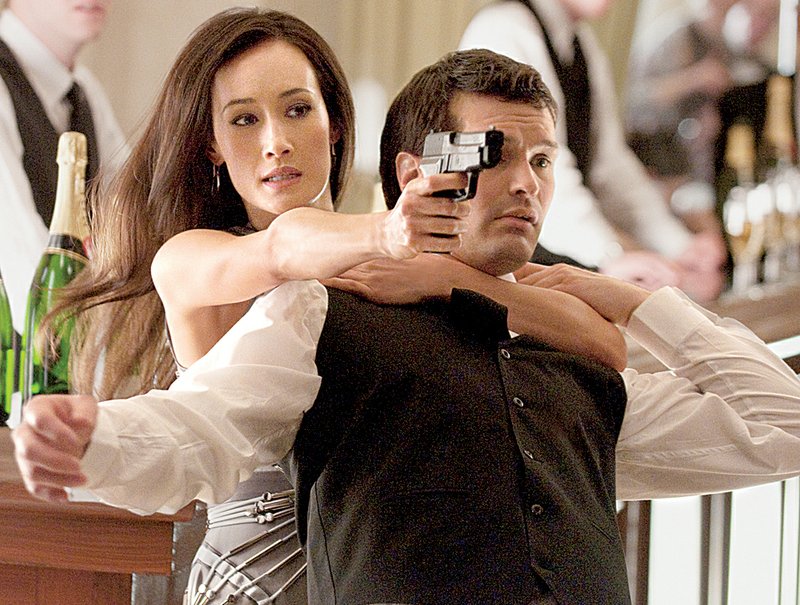 Maggie Q plays the title toughie in The CW’s remake of Nikita.

These are no girlie-girls fussing with their hair and worrying about chipping a nail.

These are ladies with badges - women with authority, not afraid to whip out their Glock 22s and get ballistic on the perps.

Just because some of today’s tough women aren’t the fashion plates of yesteryear doesn’t mean they’re not fetching. From the very beginning of TV time, the action ladies have been drop-dead gorgeous. And that includes the blond third of The Mod Squad (1968-1973) and half of Cagney & Lacey (1982-1988).

After all, this is television. Looking foxy is part of the crime-fighting arsenal - all the better to dupe the bad guys into underestimating the “little lady.”

And, of course, if the FBI, CIA, U.S. marshal, detective or superspy career doesn’t work out, the girls can always fall back on their previous careers as models.

You won’t find me complaining. There’s nothing hotter than an alluring secret agent tempting an international arms-smuggling, drug-dealing, macho terrorist kingpin into her penthouse boudoir with the promise of an intoxicating evening of intimacy - only to bust him with her world-class martial arts mojo.

And it’s all the better for ratings if she first takes out his six burly bodyguards stationed in the hallway.

While in high heels.

To the networks’ credit, most of the current action heroines have risen above the caricatures of years past. Today’s action stars may be a heady mixture of estrogen and adrenaline. But as with any character worth watching, they are emotionally layered, even complex.

TV and movie producer/ director McG (birth name Joseph McGinty Nichol) is the fellow behind the big-screen version of Charlie’s Angels. He is also one of the executive producers of The CW’s latest action thriller Nikita, a remake of a previous television series and a couple of movies.

Nikita stars whippetthin international martial arts film star Maggie Q. She might look as if she’d snap like a twig, but she’s tough as nails. Underestimate her at your peril.

“From my experience with Charlie’s Angels on down,” he said, “it’s just that I like the idea of empowered female characters that don’t apologize for being beautiful, but are very, very intelligent and multi-dimensional.”

As with McG’s Nikita, today’s tough women frequently inhabit a noir TV universe that has been decades in the making. TV’s original Charlie’s angels might find themselves overwhelmed on the mean streets of today’s grittier environment.

It has been 34 years since the action-loving “three little girls who went to the police academy” eschewed their boring desk-bound jobs for the thrills of working undercover for the mysterious Charlie.

As titillating as it was to watch Kelly, Jill and Sabrina playing traditionally male roles, the angels were still pretty much eye candy, especially Jill (Farrah Fawcett).

The show existed primarily so the ladies could go undercover in swimsuits, lingerie and cute little tennis outfits.

(Aside: Show of hands - how many of you babyboomer guys still have Fawcett’s 1976 red swimsuit poster hidden away in some drawer?)

Charlie’s Angels wasn’t the first TV show to feature a girl with guns. The first one I recall had an Arkansas connection.

Little Rock-born Gail Davis was the star of TV’s Annie Oakley, a Western that debuted in 1954 when I was a first-grader.

I was too young to realize it, but sharpshooting Annie was a hottie. All 95 pounds of her. Underneath the fringed cowgirl outfit and pigtails, Annie was a fox. She sported a brace of shiny pistols withwhich she deftly dealt with Diablo’s outlaws and scalawags.

It was the ’50s, so naturally Annie usually only used her marksmanship to shoot the gun out of the scofflaw’s hand, or maybe just wing him.

That has definitely changed. Today’s women will put you down like Old Yeller and not shed a tear.

Davis broke new ground as the feisty Oakley. It’s not a stretch to say she opened the door for future action heroines.

In the 1960s, the feminist movement gained traction.So it’s no accident that TV gave us an accomplished feminist like Emma Peel (Diana Rigg) on The Avengers (1961-69). Peel could hold her own with any man in any scrape.

Peel would have arched an eyebrow at TV’s “liberated” females in the 1970s. In addition to Charlie’s Angels, there was Wonder Woman (1976-79) and The Bionic Woman (1976-78). I loved it when Jaime Sommers took on the Fembots.

True, the women were independent and capable, but they were frequently dressed to appeal to male fantasies. Go ahead, try to imagine Wonder Woman Lynda Carter without her tiara, patriotic bustier, star-spangled blue briefs and bullet-deflecting feminum bracelets.

The 1980s were dominated by male action stars on the big screen. From Bruce Willis to Sylvester Stallone to Arnold Schwarzenegger, testosterone ruled. Meanwhile, TV retreated to family sitcoms.

It wouldn’t be until the mid-’90s that we got Xena, our first real kick-butt female action star of modern times.

We owe a lot to Xena: Warrior Princess. Lucy Lawless may have worn a revealing leather costume not dissimilar to Wonder Woman’s, but Xena was infinitely more fierce. Those who doubted often ended up on the business end of her razor-sharp chakram.

Xena and her perky sidekick Gabrielle (Renee O’Connor) fulfilled our action fantasies from 1995-2001 and paved the way for two equally strong characters.

In 1997 viewers were introduced to Buffy Summers from Buffy the Vampire Slayer. Petite Sarah Michelle Gellar became a cult idol and staked her claim as an empowered role model for a generation of girls. Buffy ruled until 2003.

Also debuting in 1997 was La Femme Nikita, starring a strapping former model from Australia. Peta Wilson played the troubled heroine in the dark drama. The series is the basis for The CW’s current Nikita remake.

La Femme Nikita was complex and sophisticated, emphasizing character over action. As nicely as she filled out her slinky little black dress, Nikita was prepared to get physical if required.

Following directly in Wilson’s high heels was Jennifer Garner as Sydney Bristow in Alias. That seminal series aired on ABC from 2001 to 2006.

Garner is still the hottest action star to ever grace the small screen. Hot? Sydney once wore a sprayed-on, skin-tight blue latex minidress while undercover at a party. She roundhouse-kicked a couple of leering baddies in one scene.

If Sydney Bristow was the sexiest action chick, then the prototype for the no-nonsense, sensible shoes, white blouse and dark slacks female FBI agent had to be Dana Scully of The X-Files. The series aired on Fox from 1993 to 2002.

Attractive, but not dazzling, Scully (Gillian Anderson) was the skeptical counterpoint to her loose-cannon partner Fox Mulder (David Duchovny). Scully can also be viewed as the predecessor of many of today’s female action heroes - competent, cooly professional and serving as a balance to a male partner.

So, who are TV’s toughest? Apart from Nikita’s fierce Maggie Q , here’s my Top 5 list of stalwart armed women I’d want covering my back when the going gets tough.

5. Annie Walker (Piper Perabo) of USA’s Covert Affairs follows most directly in Garner’s Alias footsteps. This newbie CIA field agent speaks seven languages and can disarm the bad guys with her charms or the gun hidden on her inner thigh.

4. Mary Shannon (Mary McCormack) of USA’s In Plain Sight. A deputy U.S. marshal assigned to the witness protection program, Mary eschews feminine wiles. Kudos for wearing the most sensible outfit to the office.

3. Fiona Glenanne (Gabrielle Anwar) of USA’s Burn Notice. A former IRA member, Fiona is proficient in firearms, explosives and martial arts as well as the mojito and barely-there bikini.

2. Ziva David (Cote de Pablo) from CBS’s NCIS. Former Israeli Mossad agent David knows 14 ways to kill you with a paper clip. She can also rock a smokin’ backless blue dress when undercover and singing a torch song atop a piano.

1. Olivia Dunham (Anna Torv) of Fox’s Fringe. Another Australian, Torv gives Olivia a sensitive vulnerability that belies her tough streak. Olivia even battles her evil red-haired twin from a parallel universe. How hot is that?

This is hardly a comprehensive list of the toughladies trend on TV. Other characters include Kensi Blye (Daniela Ruah) on CBS’ NCIS: Los Angeles, Annie Frost (Kelli Giddish) of NBC’s Chase, and even Sarah Walker (Yvonne Strahovski) of NBC’s Chuck.

Are they tough? Yes. Are they all still impossibly attractive? Yes. But the difference is the current crop of girls with guns wouldn’t be caught dead in a fringed cowgirl outfit.

Or maybe they would - if an undercover assignment called for it.