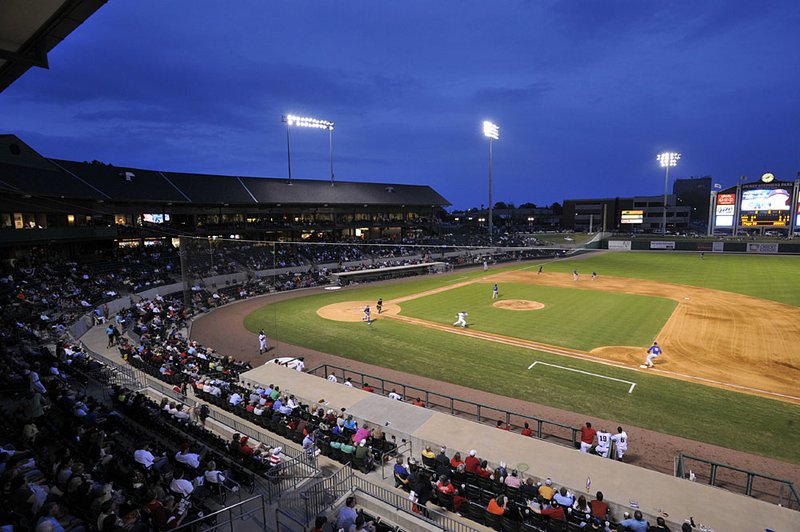 The Arkansas Travelers opened their season at home Thursday evening against the Midland Rockhounds. Dickey-Stephens Park in North Little Rock is starting its fifth season.

LITTLE ROCK — Entering its fifth season of minor-league baseball in North Little Rock, Dickey-Stephens Park remains a solid draw for visitors to the city’s downtown, even if other developments haven’t followed.

Through its first four seasons as home to the Class AA Arkansas Travelers, paid attendance to games hasn’t dropped far from the shiny-new first season, knocking down pre-construction forecasts that fan numbers would decline sharply after the first couple of years.

The Travelers, whose first string of home games this season will conclude Tuesday night, have sold more than 1.4 million tickets in the past four seasons. An Arkansas Razorbacks baseball game March 22 filled the ballpark with 10,062 fans.

North Little Rock used the bulk of a voter-approved, two-year sales tax to build the $40.4 million ballpark just off the Arkansas River. An overrun of more than $6 million in construction costs led the city to take out a loan to pay off the rest of the debt.

“I feel very strongly that we made the right decision to spend those additional dollars to build the ballpark right, build it as a place that’s not only to play ball, but an important place for people to gather,” Mayor Patrick Hays said.

“It’s proven to me to be all we hoped it to be, and I usually set my sights kind of high,” he added. “To say that I’m not disappointed would certainly be accurate.”

Early this month, the Arkansas Travelers Baseball Club Inc. paid the city $837,662 from its net proceeds in 2010 that is to go toward the remaining $3.85 million construction debt. The payment is $122,862 more than last year’s payment by the Travelers’ organization.

“Everything we get goes towards payment of the loan,” city Finance Director Bob Sisson said. The city’s Public Building Authority took out the 10-year loan in 2008. Before that, the city had carried a two-year revolving-credit agreement on the overrun costs.

The city and Travelers management agreed during construction to use ballpark revenue to pay off the cost overrun. The annual payment is based on ballpark revenue after stadium and team expenses are met.

“It’s all based on profit,” said Joe Smith, North Little Rock’s Commerce and Government Affairs director who is a liaison between the city and the ballpark.

Actual attendance - the number of people through the gates, always lower than tickets sold at a sports venue - was 2,662 per game in 2010, a drop from 3,087 in 2009, according to city figures received from the Travelers.

The paid averages are about 2,000 more than what games at Little Rock’s Ray WinderField drew. The increase is also about twice what a 2005 marketing study for the ballpark projected.

“Everybody told us that the first two years would be our biggest,” Smith said. “Our second two years weren’t shabby either.

“It’s such a wonderful venue, I don’t see [attendance] changing as drastically as it does for some minor-league teams after a three- to four year grace period,” Smith said. (Dickey-Stephens Park was chosen Ballpark of the Year for 2007 by baseballparks.com, a national website.)

What hasn’t happened as a result of building the stadium is other nearby development. Some preliminary ideas touted condominiums and office space around the ballpark, with more condos, restaurants and shops spreading out, mostly to the ballpark’s west.

The subsequent downturn in the economy became “a big wet blanket,” Hays said, on many plans, while unrelated factors scuttled other opportunities.

“To me, it’s not a matter of if, it’s just a matter of when,” Hays said of development west of the ballpark. “Hopefully, the economy is coming back and those kind of things will be back on the front burner.”

Just before construction started in 2006, the North Little Rock City Council approved an agreement with Warren Stephens, the Little Rock financier who donated the property for the ballpark next to the Broadway Bridge, to forgo additions immediately adjacent to the stadium.

Stipulations in the city’s acceptance of the ballpark property included that 7 acres on the bridge side of the ballpark would be reserved for parking and that Stephens and the city must agree to any future changes.

“There was talk of putting a high-rise past center field and a business section along the left-field side,” recalled Terry Hartwick, president of the North Little Rock Chamber of Commerce. “It was decided though to leave it all as a ball field. And I’m glad it’s all ballpark, I really am.”

Development of about 6 acres of riverfront property further to the ballpark’s west stalled because of the length of time to approve and relocate several electric power lines to the other side of Riverfront Drive.

Moving of the poles began recently, and city officials have said they hope it will lead to the property’s sale and development. The property is being marketed nationwide.

“Hopefully, we’ll be through with that relocation in mid-May, and it will be 100 percent ready for sale and redevelopment,” Smith said.