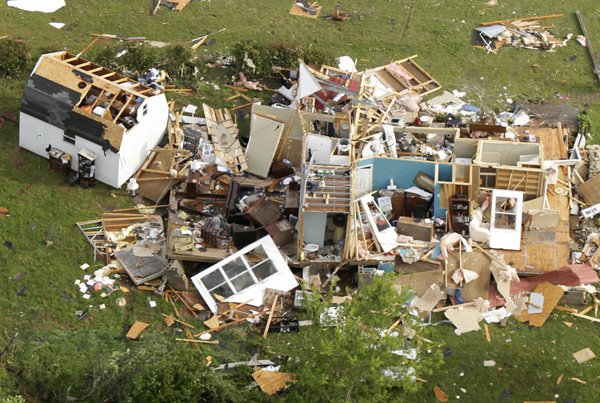 LITTLE ROCK — One person was killed in Sharp County after a line of storms moved through the area Tuesday night, marking the 11th fatality in the recent surge of flooding, high winds and tornadoes to hit the state.

Man unhurt as house destroyed around him

The National Weather Service in Little Rock, meanwhile, said storms capable of producing damaging winds or tornadoes were possible Wednesday in the southern third of the state. Severe thunderstorm watches and warnings were in effect for areas roughly south of a line from Pike to Arkansas counties.

"We're keeping our eyes on things," said meteorologist Julie Lesko. "People need to continue on their guard at least through the morning hours."

Sharp County Coroner Doug Wortham identified the woman who died in Sharp County as 48-year-old JoAnne Bradley. Wortham said Bradley was in her home at 521 Shelbyville Road near Cave City when it was hit by a tornado around 9:15 p.m.

The tornado destroyed the structure and damaged several others in the area.

"There was debris scattered as far as you could see in the dark," Wortham said.

Bradley's body was found about 50 yards from the home by her son, who went there after being unable to reach his mother, Wortham said.

Sharp County Sheriff Mark Counts said Wednesday morning that the tornado traveled on a roughly 8-mile path, touching down on Highway 230 about 6 miles east of Cave City and continuing to Highway 115.

The weather service reported two people were also critically injured near Calamine in Sharp County when a house was leveled.

In all, the storms that moved through Tuesday night were not as damaging in Arkansas as those that roared through Monday. The first system spawned at least four tornadoes and left widespread damage, destroying dozens of homes and killing four people in Vilonia.

But Lesko said the Tuesday night system actually was more powerful as it extended from Indiana to Texas, where more than 100 homes were reported damaged in one community.

"This was a stronger system," Lesko said. "It may not have looked nearly as bad as far as tornado warnings for Central Arkansas. But those cells that did develop were just as severe."

No tornadoes have been confirmed in Tuesday night's storms, but the weather service received reports of them in Polk and Prairie counties. Numerous trees were down on Highway 82 southeast of El Dorado and officials say the damage may have been caused by a tornado.

Lesko said weather service crews would be dispatched later Tuesday to survey damage and determine whether tornadoes were responsible.

Elsewhere Tuesday night, a tree fell on a vehicle near Emmet in Nevada County with one occupant suffering possible injuries. Numerous trees were down in Eudora and homes were reported damaged in Smithville in Lawrence County. Two trucks reportedly overturned on Interstate 40 in Marion while a hospital had part of its roof blown off and numerous other buildings had damage in the West Memphis area.

Entergy on Wednesday morning reported about 45,000 customers without electricity. As of 9:20 a.m., around 8,700 of the power failures were in Garland County.