For 3 freed and in spotlight, legal tethers loosened 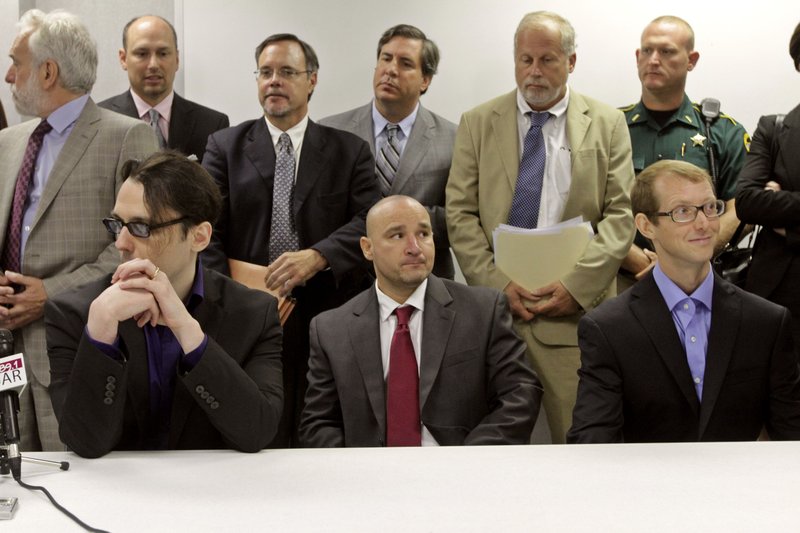 Damien Echols, Jason Baldwin, and Jessie Misskelley were released Friday after striking a plea agreement that allowed them to plead guilty to lesser murder charges while still proclaiming their innocence on the record.

LITTLE ROCK — An hour after being released from prison Friday afternoon, Damien Echols and Jason Baldwin scooted into a dark, tinted-windowed SUV that whisked the two men to Memphis for a hotel rooftop gala with their friends and celebrity supporters.

Jessie Misskelley, on the other hand, left the courthouse in his dad’s truck for a more casual neighborhood party with family and friends at his father’s home in Crittenden County.

In both situations, prosecutors made allowances in the men’s sentencing guidelines to accommodate post-release celebrations, as well as any future scenarios - film premieres, talk shows and television news magazines - that may unfold because of the national and international interest in the case.

That such concessions were made further reflects the bizarre nature of the high-profile, 18-year-old case, which has attracted a following of the rich and famous: actor Johnny Depp, the band Metallica and musicians Eddie Vedder of Pearl Jam and Natalie Maines of the Dixie Chicks.

Echols, Baldwin and Misskelley, convicted in 1994 of killing three 8-year-oldboys in West Memphis, were released Friday after striking a plea agreement that allowed them to plead guilty to lesser murder charges while still proclaiming their innocence on the record.

The judge then sentenced them to time already served, as well as a suspended, unsupervised 10-year probationary period during which they must follow certain conditions if they want to avoid additional time in prison.

That’s where the concessions come into play.

For example, while all the men are generally forbidden to associate with other felons,allowances were made for Echols and Baldwin, who wanted to leave together for Memphis immediately after their release, said Prosecuting Attorney Scott Ellington.

“We knew Baldwin and Echols were going off together. They asked for that exemption.They didn’t ask for one for Misskelley. He wasn’t going with them.”

Misskelley received an exemption that allows him be around family members who have felony convictions, Ellington added.

Another example of the allowances made: Typically, those convicted of felonies are restricted from being around firearms, but that provision also was exempted for Baldwin and Echols when they traveled with Vedder.

Members of Vedder’s entourage served as his bodyguards and were armed, Ellington explained.

“The guys in black T-shirts had high-powered weapons,” Ellington said of at least two people who walked with Vedder as he entered and exited the courthouse annex building Friday in Jonesboro.

Defense attorney Patrick Benca said prosecutors were gracious and amenable when making allowances for the logistics involved in resolving the case.

“They strongly encouraged them to leave the state of Arkansas if that’s something they wanted to do,” Benca said.

According to the other conditions stipulated in the sentencing, Echols, Baldwin and Misskelley must either be employed or be in school; avoid drugs and people who use or sell them; and submit at any time to searches and/ or seizures of their homes or cars - even if a warrant isn’t produced.

“Basically, they can’t get in trouble for the next 10 years,” Benca said.

Ellington said he’s received numerous e-mails and messages about the deal, most of them negative.

“I had some say, ‘You turned these guys loose just overnight,’ My response is that we had 18 years of long, expensive litigation. It wasn’t ‘just overnight.’”

Had the three men been convicted of first-degree murder during their 1994 trials rather than capital murder, they could have already been released from prison, Ellington noted.

“If they had gotten 40 years back then, they would have been out in 10 years,” Ellington said.

“We made the right decision,” he added. “I’ll stand by that. I’m amazed at the fallout. People are angry that we agreed to the proposed impositions. I guess they wanted us to go to trial and then lose.”

The question of whether the men will be able to profit from the case arose the day after the three walked free, Ellington said.

“What about book deals and Son of Sam?” he recalls people asking.

He said his staff is looking into what his responsibility would be in enforcing Arkansas Code Annotated 16-90-308, referred to as the state’s “Son of Sam” law.

The law and others like it take their names from a New York law enacted in 1977 that aimed to prohibit serial killer David Berkowitz, also known as “Son of Sam,” “and other criminals like him, from profiting by the sale of stories about the crimes they have committed,” according to the National Center for Victims of Crime.

In Arkansas, the law requires anyone who has pleaded guilty to turn over to the circuit court any payment from activities such as bookdeals, movies or documentaries that “reenact the crime.”

It holds the same for any payment for “the expression of his or her thoughts, opinions, or emotions regarding the crime.” The law also applies to payments to the felons’ “spouse, heirs, assigns and transferees.”

Victims and their families can sue to receive some of the money but only within five years of charges being filed in the case, which has long passed.

Now, any money would go to the state’s victim-reparation fund, but Ellington said Echols, Baldwin and Misskelley appear to have some “wiggle room.”

“I’m not sure yet whether it’s my obligation to try to chase down proceeds or not.If it is, OK. We’ll do what we can do. But if it becomes a major blockbuster film of the murders with a re-enactment, then I guess we’re square on the head [of the law’s intent],” he said.

But Jeff Rosenzweig, a defense attorney for Misskelley, said he thinks the law doesn’t pertain to writing or talking about one’s life before a crime, about the years spent in prison or about the trial.

And some lawyers aren’t sure the Arkansas law would hold up in an attempt to enforce it.

The New York law was ruled unconstitutional by the U.S. Supreme Court in 1991. The court struck it down after it was challenged by publisher Simon & Schuster in regard to proceeds from a book that was the inspiration for the movie Goodfellas.

The Supreme Court ruled that the law was too broad and placed unconstitutional restrictions on the content of free speech in violation of the First Amendment. It also ruled that the state had a legitimate interest in trying to compensate crime victims but that it went too far in attaching that to a particular type of speech.

In response to the ruling, some states have revised their Son of Sam laws.

Arkansas is not one of them.

Kenneth Gallant, a criminal-law professor at the University of Arkansas at Little Rock’s W.H. Bowen School of Law, said the Arkansas law hasn’t gotten a lot of attention because it’s seldom been applied.

“The fact that the law still exists has to do with the fact that nothing is ever done with it,” he said. “If anyone had really seriously tried to apply it, you would have seen the litigation. They would have tried to distinguish it from the New York statute, and my guess is that they couldn’t have.”

Bill Lawrence, a lawyer who now practices in Ozark, Mo., questioned the constitutionality of the Arkansas law in a UALR law journal article in the summer of 1992.

He said in an e-mail Tuesday that he stands by his conclusion that the law is unconstitutional.

“There is certainly a compelling state interest in compensating the victim or victims; however, the statute does not appear to be narrowly tailored to achieve that,” he wrote.

Lawrence said one reason the law would be in conflict with the Supreme Court’s ruling is that it only pertains to “books, motion pictures, magazine articles, radio or television presentations, live entertainment, or any live or recorded presentations and not to the criminal’s other assets.”

Lonnie Soury, the owner of a New York-based firm that acts as a spokesman for Echols and his wife, said Baldwin and Echols have no plans to write books or be paid for anything related to the case at this time.

“The plan right now for these three gentlemen is to begin recapturing their lives. Whatever comes down the road we’ll see. Certainly no discussions at all like that have taken place,” he said.

Print Headline: For 3 freed and in spotlight, legal tethers loosened