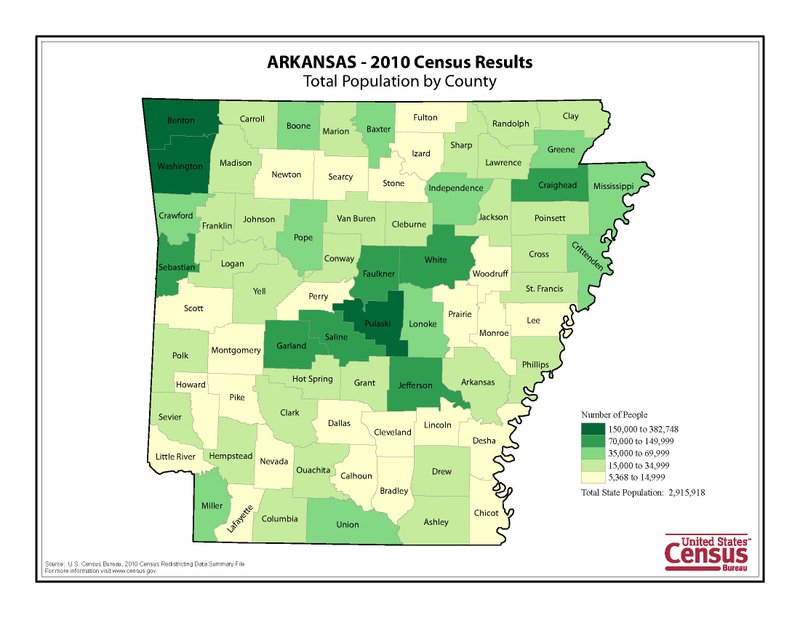 This graphic provided by the U.S. Census Bureau shows the population breakdown in Arkansas revealed by the 2010 census.

LITTLE ROCK — Arkansas' population grew by more than 9 percent between 2000 and 2010, according to census information released Thursday.

The data show declines in a number of counties in southern and eastern parts of the state as well as big gains in Benton and Faulkner counties.

The U.S. Census Bureau released the information Thursday as part of its gradual effort to provide all states with their population statistics by April 1.

Click here for an interactive map of the Census data. 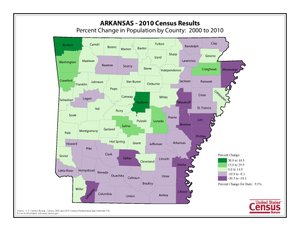 This graphic provided by the U.S. Census Bureau shows the population changes across Arkansas between the 2000 census and the 2010 census.

Springdale grew by 52.4 percent between the 2000 and 2010 censuses while Fayetteville increased by 26.8 percent and Jonesboro by 21.2 percent.

Benton County had the biggest increase in population of any county in the state, moving from Arkansas' third-most populous county to its second biggest with a 44.3 percent jump. The population in 2010 was 221,339, nearly 70,000 more people than lived there in 2000.

Faulkner County grew by 31.6 percent, Lonoke County by 29.4 percent, Saline County by 28.2 percent and Washington County by 28.8 percent. Mississippi County, Union County and Jefferson counties all had declines of at least 8.1 percent.

The population data will be used to redraw federal, state and local legislative districts based on population shifts since the 2000 census.

"Having these census numbers in hand is a necessary first step in the reapportionment process," he said. "While we are in the preliminary stages, I do welcome an initial meeting with Governor Beebe and Attorney General McDaniel to share input on re-drawing state legislative districts. We will soon release information on hearings to gather public comment from people across the state."