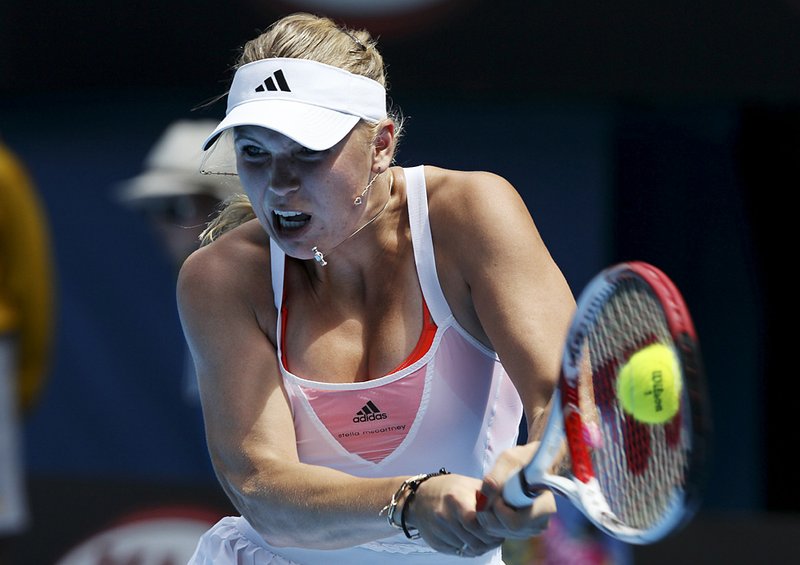 Top-seeded Caroline Wozniacki of Denmark hits a backhand return during Thursday’s 6-4, 6-3 third-round victory over No. 29 seed Dominika Cibulkova of Slovakia at the Australian Open in Melbourne.

MELBOURNE, Australia — Caroline Wozniacki beat Dominika Cibulkova 6-4, 6-3 to reach the fourth round of the Australian Open and avenge last week’s loss in a tuneup tournament.

Wozniacki, playing her first Grand Slam as the world No. 1, advanced to the fourth round for the seventh consecutive major but has yet to win one of tennis’ marquee events. The 20-year-old Danish player can hold onto the No. 1 ranking by reaching the semifinals in Australia.

Wozniacki said last week’s loss to Cibulkova in Sydney helped her prepare for the rematch, and she was confident she could continue the success she had last year, when she won a tour-leading six titles from eight finals.

Justine Henin was eliminated, losing 6-4, 7-6 (8) to Svetlana Kuznetsova just a year after reaching the final in her comeback to Grand Slam tennis.

It was Henin’s first loss in a major to Kuznetsova, the former French and U.S. Open champion, and her worst run at a Grand Slam event since Wimbledon in 2005.

Henin was only weeks into a comeback from a career break from the tour when she lost the final last year to Serena Williams, the third time in four appearances that she’d reached the championship match at Melbourne. Her comeback season was derailed when she injured her right elbow at Wimbledon and didn’t play again in 2010.

Novak Djokovic knows what it takes to win a major. He beat Roger Federer in the semifinals here in 2008 en route to the championship. He hasn’t added to his Grand Slam collection, but did help Serbia to its first Davis Cup title last month.

He advanced after playing just one set of this third round match against Davis Cup teammate Viktor Troicki. He was leading 6-2 when Troicki retired with a stomach muscle strain.

“It’s not really the way you want to win - especially if you’re playing against one of your best friends,” Djokovic said. “Unfortunately he wasn’t able to play 100 percent of his abilities.”

The pair spent a long time celebrating after Serbia’s Davis Cup title, which Troicki clinched with a victory in the deciding singles match last month.

“Viktor was actually the hero. He won the last match. He played the best match of his life there,” Djokovic said. “We’re still under a lot of emotions. A lot of celebrations that I wouldn’t talk about publicly.”

Rafael Nadal has had plenty to celebrate after three consecutive Grand Slam titles. His winning streak in majors is up to 23 matches, and he’s five victories from being the first man since Rod Laver in 1969 to hold all four GrandSlam titles at once.

The 24-year-old Spaniard has lost only four games in two rounds and said his nine Grand Slam crowns have given him “a lot of calm.”

“I have probably less pressure right now, last year’s season, winning a lot,” he said. “I have to work hard every day.That’s what I do: keep practicing with ... motivation for sure, waiting my chances, trying to find my chances.”

U.S. Open champion Kim Clijsters has only dropped four games in two rounds and is one of the favorites in the women’s draw. Her 6-1, 6-3 victory over Carla Suarez Navarro was overshadowed by her post-match on-court interview, where she jokingly chided doubles great and commentator Todd Woodbridge for spreading rumors that she looked and was acting like she was pregnant again.

No. 2 Vera Zvonareva showed some jitters early before recovering to beat Bojana Jovanovski 2-6, 6-3, 6-1.French Open finalist Sam Stosur, No. 10 Shahar Peer and No. 12 Agnieszka Radwanska advanced along with No. 13 Nadia Petrova, who beat Clijsters 6-0, 6-1 last year in a big upset and could meet the Belgian again in the fourth round.

The eighth-seeded Roddick is seeking his second Grand Slam title nearly seven years after his first - the 2003 U.S. Open.

Haase received treatment on his right ankle early in the first set, getting it heavily taped after appearing to stumble on a shot. The trainer was back out at the end of the set for Haase, who broke Roddick’s serve twice.

The Dutchman, despite the injury, made the shot of the tournament so far, chasing down a Roddick lob and hitting a flick backhand over the net while facing the back of the court. Haase won the point two shots later.

STAT OF THE DAY Four: Number of games conceded by Nadal through two rounds at Melbourne Park.

QUOTE OF THE DAY “You thought I was pregnant?” - Clijsters, joking with oncourt interviewer and former Australian doubles star Todd Woodbridge over the subject of a Woodbridge text message.