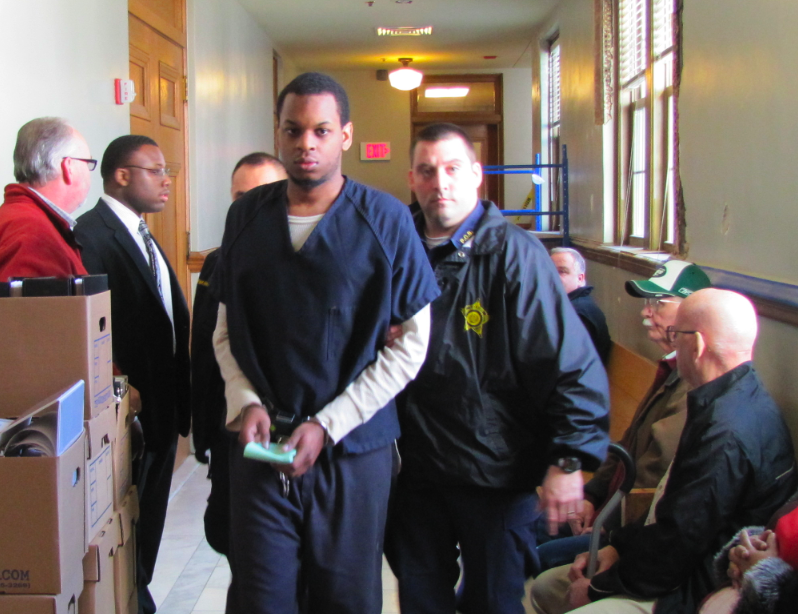 Abdulhakim Muhammad is escorted out of the courtroom after a March 1 hearing.

Seven jurors have been selected to sit on the murder trial of a Tennessee man who says he killed a soldier and wounded another outside a Little Rock recruiting station.

Prosecutors also dismissed three potential jurors. The judge excused 10 others, several of whom said they opposed the death penalty and one woman who said the trial could intefere with a trip next week.

The first five potential jurors in the Abdulhakim Muhammad capital murder case were dismissed after more than an hour of questioning by attorneys on both sides.

The next five were led into the courtroom moments later to begin a process which Pulaski County Circuit Judge Herb Wright warned would go through the night if it continued at its current pace.

Potential panelists were questioned on their knowledge of the case, their relationship to dozens of potential witnesses and their views on the death penalty, Islam and mental disease. Three were dismissed for cause because they said they would never consider capital punishment while the defense used strikes to excuse the other two.

Both sides now have 10 strikes remaining as jury selection continues.

Defense attorney Patrick Benca told the first group the defense would not contest that Muhammad, 26, fired the shots that killed Pvt. William Long and injured Pvt. Quinton Ezeagwula. Muhammad, a Muslim convert, has admitted in letters to the media and Wright that he is responsible for the June 1, 2009 attacks, which he said he conducted in response to U.S. policy in the Middle East.

Benca told the would-be panelists the defense would try to prove Muhammad is innocent by reason of mental disease or defect.

At one point, Benca asked one of the panelists to name the most important days of her life. She answered with the births of her children and grandchildren.

"Do you think that the next few days are some of the most important for Mr. Muhammad?" Benca responded. "Will you not forget that during the process of this trial."

The trial is scheduled to last two weeks, though chief deputy prosecutor John Johnson said it could end sooner.

A judge says a man charged with killing a soldier outside an Arkansas military recruiting center cannot fire his lawyers.

Judge Herbert Wright summoned potential jurors to the courtroom Monday after saying Abdulhakim Muhammad could not serve as his own attorney. The defendant rocked in his chair while lawyers read a witness list to the jurors and asked whether any knew them.

Of the nearly 50 potential jurors in Wright’s small courtroom, only four hadn’t heard about the case. One potential juror says he graduated with a soldier wounded in the 2009 attack.

Muhammad, 26, has admitted in letters to the court and media that he is responsible for the June 1, 2009, shootings outside a Little Rock recruiting station that killed Pvt. William Long and injured Pvt. Quinton Ezeagwula.

Muhammad, clad in a white button shirt, was escorted into the second-floor courtroom about 9:30 a.m.

Attorneys for Muhammad have said they will pursue an insanity defense despite their client's objections. Muhammad, born Carlos Bledsoe, has claimed he was sane and that the attack was coordinated in response to U.S. policy in the Middle East.

Muhammad's father, Melvin Bledsoe, appeared earlier this year before a congressional panel on Islamic radicalization, telling lawmakers his son was "brainwashed" into becoming a terrorist.

Attorneys on both sides worked to clear up final pretrial issues before jury selection started. Muhammad, through his attorney, reiterated his desire to represent himself. Wright ruled he was not competent to do so but that he is competent to assist his attorneys.

Bledsoe was the lone spectator in the two front rows of the courtroom, which were set aside for family.