REBEL GRAY’S GOLDEN DAYS: In 1911, LR filled to the brim with Confederate veterans 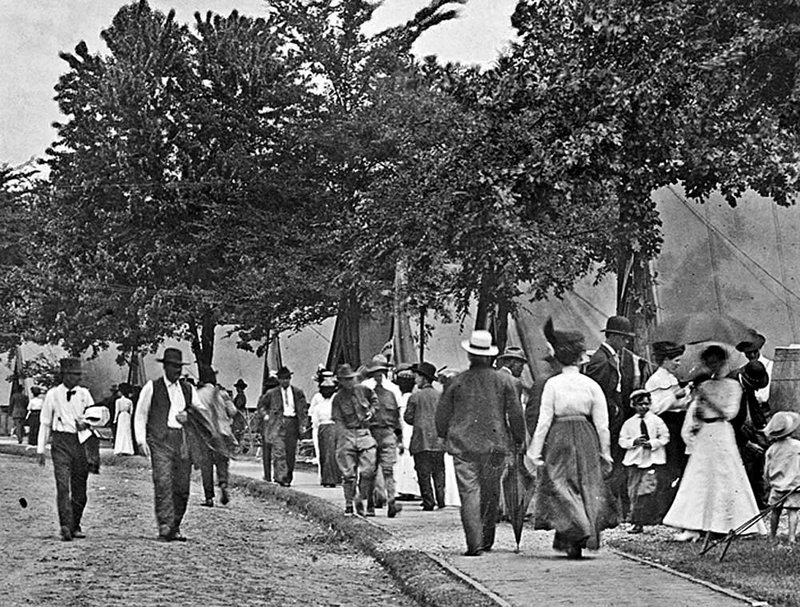 LITTLE ROCK — At a time when the men who fought in the Civil War could still gather to be revered and celebrated, Little Rock laid out the red carpet for the 1911 United Confederate Veterans Reunion marking the war’s 50th anniversary.

Up to 140,000 visitors — mostly Confederate veterans, their wives, sons, daughters and widows — converged on Little Rock. Only about 50,000 had been expected. At the time, Little Rock’s population was 45,941.

Not until November 1992, when former Arkansas Gov. Bill Clinton was elected president, were more people believed to have gathered in Little Rock at one time than during the May 16-18, 1911, Confederate reunion.

“Whatever city hosted the war’s golden anniversary reunion for the United Confederate Veterans was going to benefit significantly from the influx of tourism dollars,” said Bill Gurley, curator of the Arkansas Civil War exhibit “An Enduring Union” at the Old State House Museum in downtown Little Rock. “It was a big deal to see who could host that particular reunion. It also meant a significant financial outlay to make everything ready for the tourists coming into the city.

“I can’t think of anything that would come close to that now,” he added.

There were 48 committees formed to oversee all aspects of the reunion, from lodging, food and entertainment to greeting arrivals at train depots and directing them to their destinations and suggesting businesses to patronize. The morning Arkansas Gazette and the afternoon Arkansas Democrat newspapers published reunion commemorative editions. The Democrat’s totaled 98 pages, highlighting a “modern-day” Little Rock, but fudged a bit by claiming a population of 65,000.

Federal military tents were erected throughout City Park (now MacArthur Park) to house and feed the 11,000-12,000 veterans — double the expectation — who came. The U.S. Congress unanimously approved legislation to supply the tents for the Confederate veterans. The state Legislature, on the other hand, refused to appropriate any money to help with the city-hosted reunion.

City schools were closed that week to be used for overflow housing. About 9,000 cots were placed in schools, in churches and even local government offices to take care of visitors for $1 per night. Residents opened their homes to still more. A campaign for women and schoolchildren to sell “tribute” buttons for $1 each statewide helped to raise funds to cover expenses.

Businesses were pressured to contribute to the cause. Hotels and boardinghouses were ordered to freeze their prices to assure fair treatment of the tourists. Merchants who donated money to the reunion could display yellow placards with official reunion seals in their windows to advertise their support, and their names were printed in the newspapers as supporters. The names of those who didn’t contribute were also publicized, Gurley said.

“Clearly, the organizers wanted to make sure Little Rock didn’t come away with a bad reputation, that the honor of the city was at stake,” Gurley said.

Merchants directed advertisements of items and discounts specifically toward the Confederate veterans. M.M. Cohn department store advertised Confederate gray uniforms for $9-$15, plus the retailer would pay part of a customer’s railroad fare, depending on the amount of purchases made. The Optical Department at Albert Pfeifer and Brothers offered free eye exams for Confederate veterans and glasses made on-site “at reasonable prices.” Mercantile Bank touted “free ladies restrooms” newly installed for reunion visitors.

“The reunion that year was a very special time, being the 50th anniversary of the war’s start,” said Stephan McAteer, director of the

exhibit. “A lo t of these guys were getting up in years and would not be around much longer. There was a desire to show these veterans that their service was appreciated.”

The reunion committees prepared for months. Little Rock was decked out with Confederate flags and photos of Confederate generals, including on the outside of City Hall. Sixty white columns, 12 feet high and strung with lights, flags and red-and-white bunting, lined the way between the City Auditorium near City Hall to City Park where the veterans camped for free. A banner by the Grand Army of the Republic, an organization of Union veterans, displayed clasped hands to welcome the Confederate veterans.

Early arrivals signaled that the city would be pressed to meet everyone’s needs. The Arkansas Gazette reported daily train arrivals as counted by officials of three railroads. The companies supplied extra trains and fare discounts to accommodate reunion visitors.

A Gazette headline on May 19 proclaimed that Little Rock had hosted 106,800 visitors. That figure was based on the number of train passengers and was often used as a total. Other estimates push the number to 120,000, Gurley said.

“When you include the people who rode horses in or drove in, the more accurate estimate is 140,000,” Gurley said of total reunion attendance.

An “unexpected rush,” the newspaper reported, of about 500 early arrivals came three days before the reunion’s start. Another 8,000 came the next day. The Reunion Committee had preregistered about 1,500 veterans and made arrangements for only 5,500.

“We are literally swamped,” the Arkansas Gazette quoted Judge William M. Kavanaugh, the chairman of the reunion executive committee, and for whom Little Rock’s Kavanaugh Boulevard is named. “We are confronted by a crisis.”

Kavanaugh put out a plea also through the newspapers urging residents “to open your homes.”

“They were quite surprised and quite stunned, really, by the number who came into the city,” Gurley said. “They lived up to the task, you have to give them credit. The city fathers went above and beyond the call of duty to make sure everyone’s experience in Little Rock would be quite memorable.”

The veterans were well taken care of at what was called Camp Shaver at City Park. The camp was named for its commander, Robert G. “Fighting Bob” Shaver, 81, who led the Confederacy’s 7th Arkansas Infantry.

The camp fed the veterans for free in two large dining tents. Dozens of cooks, waiters and dishwashers were hired. Provisions included 16,000 loaves of bread, 8,000 pounds of steak, 3,000 pounds of roast beef, 110 cases of eggs, 1,700 pounds of coffee for three 60-gallon coffee urns, 350 bushels of Irish potatoes, 400 pounds of rice and 300 pounds of tapioca pudding, according to the museum exhibits. Camp Shaver is said to have served 54,000 meals.

The only blacks reported to be present were “body servants,” who had been Confederate officers’ personal slaves. An Arkansas Gazette article said about 20 of the former servants arrived in Little Rock to hold their own reunion. Among them was 86-year-old Jefferson Shields of Virginia, said by the Arkansas Gazette to have been the servant of Gen. Stonewall Jackson.

The reunion’s highlight was the parade on the final day. “At an early hour,” the Arkansas Democrat reported, “the streets were well lined with spectators along almost the entire line of march” awaiting the 10 a.m. start. People also crowded in windows and along rooftops, or climbed poles.

The parade route covered 20 blocks. It stretched along Markham Street from State Street to Main Street, continuing to 10th Street eastward to Camp Shaver. The parade took 1 hour and 47 minutes, according to the Gazette, then its participants turned around and marched back to where it began.

Participants included veterans, dignitaries, bands, and Reunion Queen Kathleen Barkman and her maids of honor in a float drawn by four gray horses. Parade estimates were of 12,000-15,000 participants, with up to 150,000 onlookers. Veterans of Gen. Nathan Bedford Forrest’s cavalry were among those in the parade on horseback.

“Here and there was a veteran with a leg missing, or with an empty coat sleeve pinned to his breast,” the Arkansas Gazette reported. Many veterans carried “tattered Southern flags ... worn and shot riddled.”

One of the parade’s famed participants was known only as a Civil War drummer from Georgia. The one-time “drummer boy” marched and beat his drum until almost collapsing from the heat on the parade’s countermarch, the Gazette reported. He insisted on continuing until the end, where he was seen by a physician and was reported to have recovered.

Fourteen bands from across the South played Southern favorites while marching. “There was no telling how many times ‘Dixie’ was played,” one newspaper account said, “but it could have been played a thousand times and still would have been greeted with great enthusiasm.”

“From a tourist perspective, it was a huge success,” McAteer said. “There was to be no one who would not have a place to sleep or not be fed. The community got together and took care of them while they were here.”

Little Rock again hosted the United Confederate Veterans Reunion in 1928 and in 1949, the latter being attended by only four veterans. The oldest among them was 103 years old.

Photographs for these articles were provided by the Butler Center for Arkansas Studies and the MacArthur Museum of Arkansas Military History, both in Little Rock. Other art elements were obtained from the archives of the Arkansas Democrat, the Arkansas Gazette and The News and Courier of Charleston, S.C.

A photo slideshow is available at arkansasonline.com/1911/.