9/11 reflections: A sister shares her experience at Ground Zero 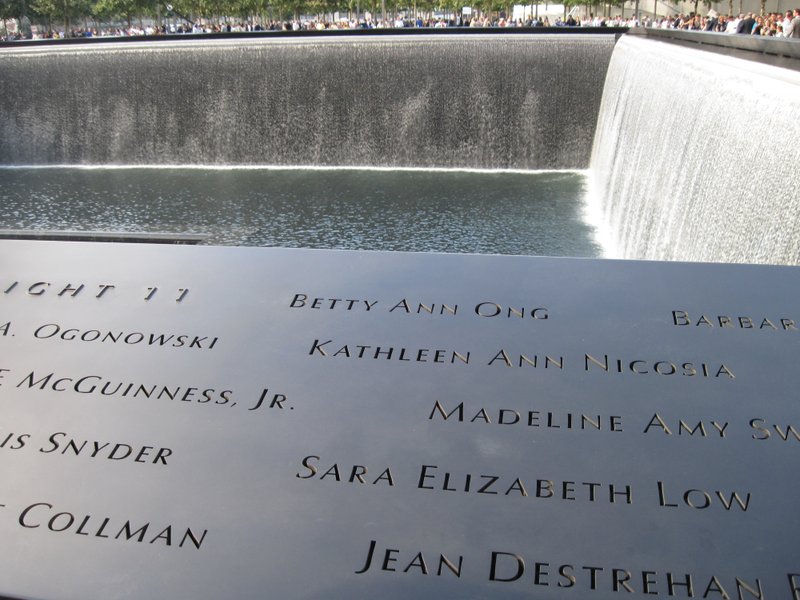 This is not an uplifting contemplation of the tenth anniversary of 9/11, imbuing a Zen-like acceptance of life going on or invoking concepts like hope and resilience. That sort of reflection serves a purpose, but so, too, does the unvarnished reality.

The trip to New York begins for my parents and me with a fourth visit to Perry Funeral Home on Long Island. We are picking up another set of my sister’s remains – a small packet wrapped in heavy plastic and secured with rubber bands. I am humbled by my parents’ grace as they walk out, gingerly carrying the precious parcel, but every other part of them strong – heads high and shoulders squared. The paperwork with the packet is familiar by now - a series of numbers and the words “fragment” and “partial” and “Sara Elizabeth Low.” The ride into Manhattan is mostly silent, my mother’s left hand resting lightly on top of the small traveling case that now holds a little more of what’s left of Sara.

Alyson Low is the sister of Sara Elizabeth Low, a flight attendant from Batesville who died when American Airlines Flight 11 hit the north tower of the World Trade Center. Alyson wrote about being at Ground Zero for the 10-year commemoration of Sept. 11, 2001. Alyson lives in Arkansas.

Later, my dad and I visit the Family Room in a building on the southeast corner of Ground Zero. It is a sacred space where the families can leave remembrances of those lost. Wedding photos, ballet tickets, birthday candles, bottles of beer, Christmas decorations, model race cars, and pleading notes of grief paper the walls, the windows, the cabinets, the backs of chairs; every bit of space is filled with concrete representations of better times and of longing. Sara has her own little area of things, which we rearrange so there is room for more. We will not disturb anyone else’s items, and they do not disturb ours.

There is a reverential stillness in the Family Room, but outside is chaos. I ball my fists as we navigate around people blocking the sidewalk to take pictures. They could be family members, friends, or other sincere citizens here to pay their respects, but my first response is to swat the cameras out of their hands and scream at them for gawking at the scene of my sister’s murder. This is the bizarre dichotomy of an intensely personal loss on the global stage. My sister’s death has been co-opted in the last decade for political, religious, and commercial reasons and by tangentially connected people and strangers who just want to insert themselves into this tragedy. She has been taken from us in more than one way at times, and it makes me suspicious of everyone.

Many intersections are blocked by police, so we have to wind our way through smaller streets. It is in these shadowy, secondary canyons that I look up, wondering if there is still something of my sister on that windowsill or over in that gutter.

What television conveys of the ceremony is a poignant sea of everymen holding photographs of spouses, siblings, and children. What the cameras don’t capture is the man my mother has to shush because he is barking directions to a woman taking photographs during the moment of silence at 8:46, the time Sara’s plane struck the North Tower. Nor do they show another man giving a loud color commentary on his Bluetooth to someone on the other end of the line. Neither do the TV cameras pick up on the panic rippling through the crowd as we realize the public address system is failing. How will we hear the names?

The plaza opens, and I can’t get to Sara’s name quickly enough. I am caught off guard by my desperation. I hug my dad and hear the clicking in his throat as he does a better job of controlling his emotions than I do mine. The memorial is graceful, powerful, and beautiful - entirely unlike the jagged, gaping wound that burned for weeks. Sara, too, was graceful, powerful, and beautiful – entirely unlike the ugly, violent way she had to die.

We visit with other families but listen for Lilianthal, Liangthanasarn, Louie, and Lovero, our cues that Sara’s name is close. My parents and I wait, our arms around each other. Her name is read by a good, strong voice that rings out, and we nod our heads in approval. But it will never cease to be terrifying to hear and see the name my parents picked for their baby - in a private moment of hope and love on October 27, 1972 - in this place, however beautiful the voice or stunning the memorial may be.

I trace her name over and over with my fingers, in disbelief even after all this time that it is necessary to include her with all of these others. The truth is here. I didn’t think another level of reality could exist, but it does. Oddly, a feeling of pride swirls around – they are heroes, after all - with the bewilderment and anger and sadness and fear. But then it is gone. Dad cups in his hand some of the water that quietly flows beneath the bronze panels before it cascades into the pool below, and he spreads it across the letters. Later, we will return to the north pool after the plaza has nearly emptied, and my mother will make a rubbing with a pencil and paper borrowed from the hotel. She will precisely center Sara’s first, middle, and last name on the page, running the pencil back and forth with methodical, thorough strokes.

We stay on the plaza until nearly closing. I struggle to leave my little sister’s name. I want to stand guard over it. Perhaps it is wrongheaded to assign such significance to tangible things, but when a person vanishes into the air like Sara did, they give us something to grip when the world tilts. I kiss her name and walk away, and then my parents say good-bye as I wait on the other side of the pool. We are tired from the day. We are tired from the 10 years. Tomorrow we go home, and we will live. But not completely. Never completely.