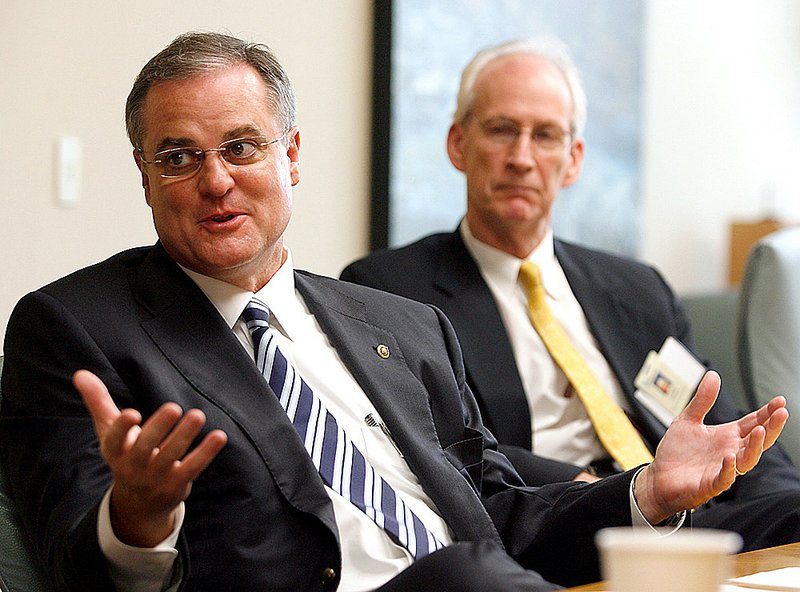 Austin Gaines (right), an executive with the Sisters of Mercy Health System, listens as U.S. Sen. Mark Pryor, D-Ark., speaks during a meeting Tuesday at Mercy Medical Center in Rogers.

A resolution introduced Tuesday by Sen. Mark Pryor would create a national jobs day in which businesses in the private sector hire at least one unemployed person.

Pryor credits Jerry Jones, an executive with Little Rock-based Acxiom, for the initiative. Jones and other business leaders have formed uhireU.S. to spur the business community to provide jobs.

“The business community will lead America out of this recession by out-innovating its global competitors, but government can help by laying the groundwork,” Pryor said. “For each person hired, we subtract one individual from the unemployment rolls."

“The backbones of our economy are the million-plus U.S. businesses with 50 or more employees.” Jones said. "Our goal is for over a million people to become employed by the end of November."

The naming of Nov. 1 as National Jobs Day was also announced at the Clinton Global Initiative conference in New York by uhireU.S.