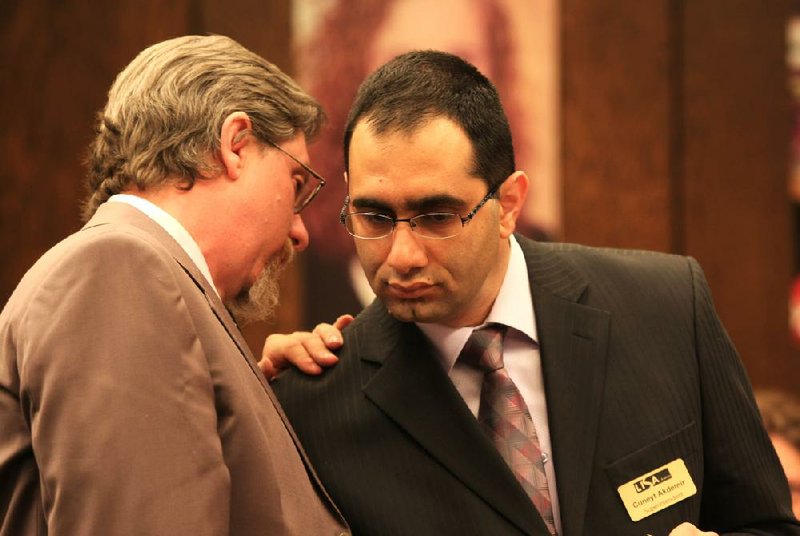 LISA Academy math department Chairman Kevin Durand (left) talks Tuesday with Lisa Academy Superintendent Cuneyt Akdemir at a state Board of Education meeting in Little Rock in which the school’s charter was renewed.

LITTLE ROCK — The Arkansas Board of Education on Tuesday approved a 10-year renewal of its charter with Haas Hall Academy in Fayetteville and a five-year charter extension — plus a 200-student increase — for LISA Academy in Little Rock, two of the state’s highest-achieving public schools.

On the second day of a two-day meeting on charter schools, the state board also approved a three-year renewal for both the Vilonia Academy of Technology, for second through fourth grades, and Vilonia Academy of Service and Technology, for fifth and sixth grades. The two programs — charter schools within larger schools — are run by the Vilonia School District.

The state Education Board voted 6-2 for the five-year charter renewal and the expansion to 800 students for LISA Academy over the objections of an attorney for the Little Rock School District, which is challenging in federal court the state’s establishment of charter schools in Pulaski County.

LISA is an acronym for the seldom used full name of the school, Little Scholars of Arkansas.

District leaders contend that the state-approved independently run public charter schools in Pulaski County compete with district magnet schools and the majority- to-minority student transfer program in violation of a 1989 agreement in which the state pledged to support the desegregation programs.

Louanne Baroni, an assistant principal at LISA Academy, described to the state board the charter school’s sixth-through-12th-grade, college-preparatory program with an emphasis on math and science; its student successes in state and national academic competitions; and its tutoring of students after school, on weekends and even during school breaks.

Baroni noted that 37 percent of the school’s 600 students qualify for subsidized school meals on the basis of low family income. That’s up from 18.7 percent in 2007, she said.

“The largest single increase in our free and reduced lunch rate coincided with the opening of our new high school building, which allowed us to grow to our capped enrollment. That’s one of the reasons why the increase in the cap from 600 to 800 is important, so we can further expand that particular population,” Baroni said.

The school recruits in parts of Little Rock that have higher concentrations of black and/or lower-income students. Starting next year the school will provide bus passes for its students, Baroni said.

Chris Heller, an attorney for the Little Rock district, told state board members that LISA Academy fails to reflect the 68 percent black and 70 percent poverty rates of the school district. He urged against a long extension of the charter, saying that the changes being made at the school are the result of having to appear before the state Education Board. He also criticized the charter school’s academic goals for being vague and not easily measured.

Jess Askew III, an attorney for charter schools in the court case, countered, saying that the state board can revoke the school’s charter at any time there is a problem. He also said the charter schools provide options for some 3,000 black students who are on waiting lists for magnet schools they can’t attend because of a 50-50 racial ratio required for those schools, some of which have empty seats. He called that “a dirty little secret” about the magnet schools.

Board member Vicki Saviers of Little Rock said families have turned to the charter as an alternative to Little Rock middle schools and urged the district to “work hard” on its middle schools, some of which have been in the state’s improvement program for many years.

In response to state board questions, LISA Academy Superintendent Cuneyt Akdemir said that the school has a contract for teachertraining programs with the Cosmos Foundation, which is a Texas-based sponsor of dozens of charter schools in the Harmony Public Schools network. The foundation is also the guarantor of the Little Rock school’s construction bond.

Akdemir, a native of Turkey, said that 10 of the school’s 45 staff members are in the United States on visas, and others on the faculty have ties to Turkey.

In response to another question, he said that the Little Rock charter is not affiliated with any religious organizations, specifically, the international Gulen movement made up of followers of a Turkish religious leader.

Education Board members praised the top student achievement results reported for Haas Hall Academy, which offers an accelerated college preparation program for up to 320 students in eighth through 12th grades.

But board members pressed Martin Schoppmeyer Jr., founder and superintendent of the school, for information on the income levels of the Haas Hall students to determine whether the school is successful with poor students, who can be more difficult and costly to educate. The percentage of poor students in a school is typically reflected by the percentage eligible for free and reducedprice school lunches.

Haas Hall, however, does not offer the federal school breakfast and lunch program, and Schoppmeyer said his attempts to get parents of students to fill out forms showing general income levels are met with resistance and have been unsuccessful.

“I’m blown away by your numbers,” Board Chairman Ben Mays of Clinton told Schoppmeyer. “Your achievement figures are just fabulous. And if you showed us those achievement figures and, at the same time, showed us a free and reduced lunch rate of 50 or 60 percent, I’d be saying we need to send a team up there and find out what you are doing and bring it back ... and carry it out and extend it.

“But, from what I’m seeing, I don’t have any data that would indicate to me that your students wouldn’t have done just as well if they had gone to a traditional public school,” Mays said. “There’s a caution there in looking at your numbers that we don’t just assume it’s because of what you are doing with your program beyond attracting very bright students.

“If you could come up with some way with providing us with information showing us that your students are a hodge-podge of students and you have a demographic that is pretty much like Fayetteville [School District], your [achievement] numbers would mean much more to us, much more to the charter concept,” he said.

Schoppmeyer said the school, with its 100 percent graduation and college attendance rates, has about a 2 percent loss of students. And while the school doesn’t have poverty information, he knows of students who enter with low grades on their records and then improve those.

That’s done in part through study halls after the regular class day, small class sizes, teachers with degrees and experience in the fields they teach and, for the individual struggling student, weekly meetings of the student, parents and teachers to check on student progress.

“Is there ever: ‘This is not the school for you?’” board member Toyce Newton of Crossett asked about any counseling of students who seek to enroll.

“No, ma’am,” Schoppmeyer said. “We want to work with anybody who wants to go to college. I would never crush anyone’s dream by saying this school is not for you.”

The school’s students come from 19 Arkansas school districts as well as private and home schools.

The board voted 7-1 for a 10-year renewal, the longest awarded to date to a charter school, with Newton casting the no vote. She said the 10-year term was inconsistent with the shorter renewals for other charter schools and because of questions on whether the school was welcoming to a cross-section of students.

State Education Commissioner Tom Kimbrell responded that the school, which never committed to target students at risk of failing, will be monitored by the department over the 10 years.

Board member Joe Black of Newport told Schoppmeyer that Haas Hall has a “moral obligation to capture what it is doing right so the rest of us can emulate it. If an extended charter makes you lazy, you are not fulfilling your obligation. You may be molding rough clay. We want to learn how to do that.”