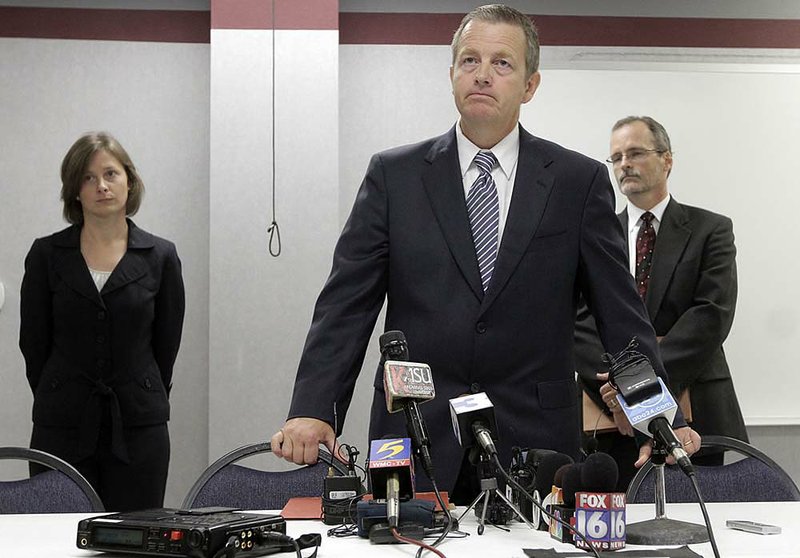 Scott Ellington, center, prosecuting attorney second judicial district, flanked by prosecutors Melonie Osworth and Alan Copelin, discussed the terms of a deal struck by the state releasing three men convicted of the 1993 deaths of three West Memphis children. Damien Echols, Jessie Misskelley and Jason Baldwin agreed to a legal maneuver that lets them maintain their innocence while acknowledging prosecutors have enough evidence against them.

LITTLE ROCK — Prosecutor and congressional candidate Scott Ellington said Wednesday that future legal costs to the state and potential juror misconduct factored into his decision to agree to the deal that freed three men convicted in the murders of three Cub Scouts in 1993.

Speaking on a panel with the attorneys for the three men convicted in the case, Ellington said that he wanted to ensure that a guilty verdict in the killings was preserved when he considered the deal last year. Damien Echols, Jason Baldwin and Jessie Misskelley were freed in August under an unusual plea deal in which their original convictions were set aside and they pleaded guilty to lesser charges.

Ellington, one of three Democrats running for an east Arkansas congressional seat, said he knew prosecutors faced a tough legal fight in the case.

“I knew it was looking pretty drastic when you have million dollar experts and million dollar lawyers that are working for free,” Ellington said in the discussion, part of a day-long symposium on the case at the University of Arkansas at Little Rock’s Bowen School of Law. “It was going to be a difficult case.”

Ellington, who agreed to the deal as the state was preparing for a new hearing in the case ordered by the state Supreme Court, said he considered how much it would cost the state if the three men were eventually acquitted. He said he was worried about potential damages that would be awarded if the three men sued over their original convictions.

“The fact is, if these guys had been acquitted, don’t think that Blake wouldn’t have had his lawsuit ready to go,” Ellington said, referring to Blake Hendrix, Baldwin’s attorney.

Ellington said he also believed that the allegation that jurors considered Misskelley’s later-recanted confession in Echols and Baldwin’s trial could have led to a new trial for the three men. That confession couldn’t be introduced at the other trials because a defendant has the right to confront his accuser, and Misskelley refused to take the stand.

“That was the one whole ace in the hole for the defendants to get Echols and Baldwin a new trial, when that juror took that evidence back in there and openly discussed it with the others,” Ellington said. “I believe that was what was going to be the ringer for getting a new trial, if not by the state court but the federal court.”

Ellington is running against state Rep. Clark Hall and Arkansas State University economist Gary Latanich for the Democratic nomination to challenge Republican Congressman Rick Crawford. Ellington has said the plea deal rarely comes up during campaign appearances, and has defended the agreement as a sign that he knows how to compromise.

Lawyers and supporters of the three men have said they still are pushing for a full exoneration. An anonymous donor has offered a $200,000 reward for new information that leads to the arrest and conviction in the 1993 deaths.