Live up to Promise, Clinton urges 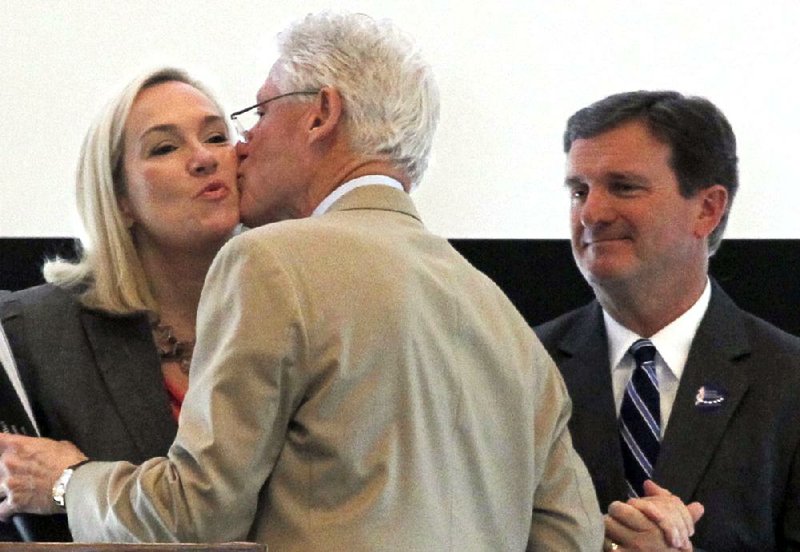 Though, she admitted with an ear-to-ear smile afterward, “It was pretty cool to see him.”

Clinton served as keynote speaker at the sixth annual event where seniors pledge to go to college with money provided by the El Dorado Promise scholarship program.

The former president urged the soon-to-be graduates to help cure the nation’s economic and other woes by getting a quality education.

“It’s important to our country,” he said. “We have lost ground lately in this modern economy because we need more college graduates.”

The Promise event was held for the first time at the new El Dorado High School, a gleaming $43 million, 317,000-square-foot building that opened in September.

Established in 2007 by El Dorado-based Murphy Oil, the Promise is a $50 million scholarship commitment by the company that can be used at any accredited two- or four-year college or university — public or private.

And, thanks to this gift from one of the community’s oldest businesses, Aaron and more than 300 of her El Dorado High School classmates have a chance at a free college education.

Aaron said she wouldn’t have been able to fulfill her dream of going to the University of Arkansas at Fort Smith without Promise dollars. She said her brother was part of the first Promise class five years ago.

“There are eight people in my house, and we all live together with just one income,” said Aaron, who plans to major in accounting. “My dad was very thankful for this. It’s a great thing, and it means so much to me and my family.”

Over the past five years, the Promise has provided more than $8.5 million in funding to 997 El Dorado High School graduates attending 57 colleges and universities, according to statistics from Murphy Oil.

Additionally, when com- bined with the Arkansas Lottery Scholarship or others, Promise dollars may be used for other college expenses, such as room and board.

There are similar scholarship programs in Arkadelphia, Sparkman, Norphlet and Phillips County.

By committing to go to college, the El Dorado seniors pledged to move America forward by contributing to society in positive ways, Clinton said.

“This is a great thing,” he told the seniors seated in long rows on the floor of the 2,200-seat Wildcat Arena. A capacity crowd looked on.

“I only wish every group of students in America had access to a company that would put up money to do what Murphy Oil has done for you. I will make it my business to try and guilt-trip some more of them into doing it.”

Hannah Burross, 17, said Clinton’s words meant a lot to her.

“I thought it was an amazing speech,” said Burross, who plans to attend the University of Mississippi this fall to study biology.

“Everything that he said was true, because this scholarship has given so many kids the opportunity to not only go to college, but to go to a college that may have been out of the picture for them financially.”

Wrapping up the event, Clinton prompted the seniors — all attired in Wildcat-purple gowns and matching baseball caps — to grab the pens laid out before them and sign letters of intent to go to college.

“When I look out there and see all of you, I see all these exciting personal stories that will be built, and if you live it to the best of your ability, you will also be a big part of lifting your country back economically so we can all grow together,” Clinton said.

“The thing that matters for your future is we have to get people to see that education is the key to your personal freedom and to America’s economic recovery.”