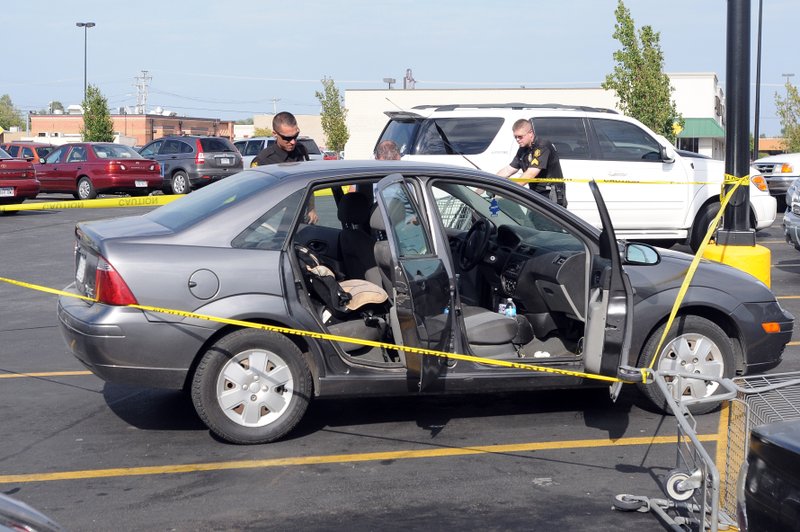 A child died after being left in this car in Walmart parking lot in Springdale.

SPRINGDALE — A two-year-old boy died Friday afternoon after his great-grandparents left him in a car for more than two hours.

The boy, whose name was not released Friday evening, had no pulse when rescuers pulled him from a gray Ford Focus about 4:40 p.m. He was taken to Northwest Medical Center where he was pronounced dead just after 5 p.m., according to Lt. Kevin Lewis, public information officer for the Springdale Police Department.

The boy’s great-grandparents apparently forgot him in the car while whey shopped at the WalMart at 2004 S. Pleasant St.

Even in cool temperatures, cars can heat up to dangerous temperatures quickly. With the windows cracked open, interior temperatures can rise almost 20 degrees within the first 10 minutes. Anyone left inside is at risk for serious heat-related illnesses or even death. Children who are left unattended in parked cars are at greatest risk for heat stroke and death.

When traveling with children:

w Never leave infants, children or pets in a parked car, even if the windows are cracked open.

w When leaving your car, check to be sure everyone is out of the car. Do not overlook any children who have fallen asleep in the car.

The great-grandparents told police they thought the boy had been left for about 45 minutes, but surveillance cameras covering the parking lot indicated they’d been inside for just more than two hours, Lewis said.

Detectives were questioning the great-grandparents Friday evening. Police did not provide their identities.

The temperature was 102 degrees in Springdale just after rescuers were called.

Lewis did not know Friday evening if the great-grandparents would face criminal charges. Police were attempting to notify the boy’s parents, Lewis said.

Friday’s incident is the 19th case of a child dying in a hot car in the U.S. this year, according to a website maintained by the University of San Francisco’s department of geosciences. Last year, 33 children died. Since 1998, hot cars have claimed 545 children. More than half those cases involved forgotten children. The remainder were either deliberately left in cars, or climbed in themselves, according to the website.

Forgotten children deaths increased tenfold beginning in the early 1990s, when most child-safety seats moved from the front to back seat of cars because of airbags, according to the website.

A one-month old survived in July 2011 after his mother forgot him in a car for 37 minutes in a Fayetteville grocery store parking lot.

A child died in a car in August 2010 in Bentonville after her father forgot her in the vehicle when he went to work.

In June 2009, two children were found dead in the trunk of a car in Springdale, apparently having climbed in while playing. Their mother pleaded guilty to two misdemeanor charges of endangering the welfare of a minor.

Two girls aged 16 months and 4 years died in April 1998 when they were left in a hot car in rural Benton County.

The temperature inside a closed car can be 45 to 50 degrees higher than the outside temperature, according to the site.

Death from heat stroke caused by hyperthermia, or high body temperature, is especially an issue for children younger than 4 because a child’s body temperature may increase three to five times as fast as an adult, according to the National Highway Traffic Safety Administration.