A few new tricks needed to add razzle-dazzle to The Hobbit by PIERS MARCHANT SPECIAL TO THE DEMOCRAT-GAZETTE | December 14, 2012 at 1:59 a.m. 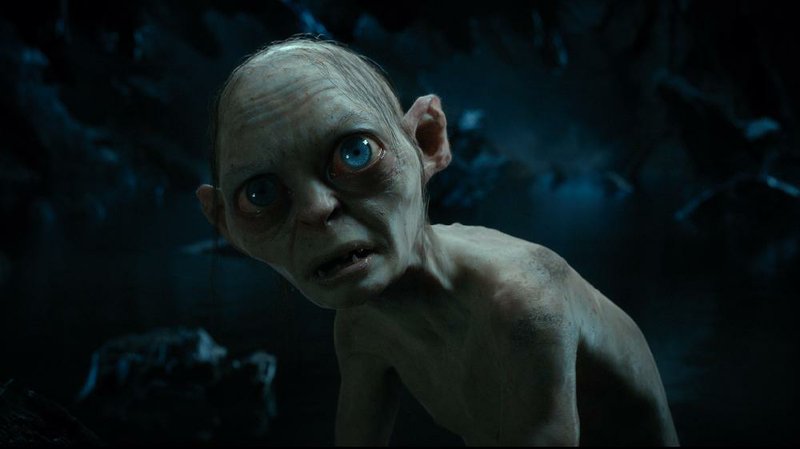 Gollum, performed by ANDY SERKIS in the fantasy adventure “THE HOBBIT: AN UNEXPECTED JOURNEY.”

LITTLE ROCK — The subtitle of Peter Jackson’s latest trip to Middle Earth is “an unexpected journey” but it may as well have been “remembrance of things past,” so closely tied is it to his previous Lord of the Rings trilogy of the early aughts.

The dwarfs and Gandalf (played by Ian Mckellen) contract Bilbo (Martin Freeman) to be their burglar in this scene from "The Hobbit: An Unexpected Journey." Clip courtesy of Warner Bros.
[View Full-Size]

We are again in the realm of orcs, dwarves, goblins, elves and short people with very large and hairy feet and our story again involves a righteous quest that involves many dangers and encounters with hideously ugly creatures en route to quelling the growing darkness that has settled over the land. Given all that familiarity, I just wish Jackson could have dispensed with one other bastion of the first batch of films - a running time pushing three hours - but alas.

To be fair, that’s a long time to visit virtually anywhere, even a place as mystical and jaw-droppingly gorgeous as Jackson’s native New Zealand, which proves again to be the perfect geographic backdrop to all of J.R.R. Tolkien’s many flights of fancy.

At least we are reunited with the ever likable Gandalf (Ian McKellen), a powerful wizard who comes to the beautiful glade of the Shire to propose an adventure to his old friend Bilbo Baggins (Martin Freeman), a simple hobbit who spends his time cleaning his house and making well-furnished one-person dinners.

Before he knows what’s hit him, Bilbo’s place is beset by a gaggle of rowdy, hungry dwarves, eager to begin their journey. It seems they used to have a magnificent home city carved into a mountain filled with gold and jewels. Many years ago, a fearsome dragon, Smaug, rained fire on them, drove them away and has slept on their pile of gold ever since (dragons love gold, it turns out). These 13 dwarves have banded together behind their would-be king, Thorin (Richard Armitage), to take back their homeland by any means necessary. They need Bilbo to help them infiltrate the dragon’s lair, a job that the nervous hobbit reluctantly accepts only after a good deal of soul searching.

Thus ensues another long journey into Jackson’s heavily CGI-enhanced fantasy world. Rather than start with something that feels totally new and unexplored, Jackson has gone the opposite route, tying almost everything together with what he has already shown us. Thus, he has the opportunity to bring back many beloved characters from the first trilogy, including fantastical elven royalty (Hugo Weaving and Cate Blanchett), the irrepressible Gollum (Andy Serkis) and even a quick appearance by Frodo (an aged Elijah Wood, once again donning giant fake feet).

The continuity, while often welcome, speaks to one of the problems the film encounters: Much of it has a slightly played-out element, a sense that we’ve already been here and witnessed this. A bit like the second Star Wars trilogy, we’ve already seen the most dramatic and world-altering material of the series, so going backward for something a good deal less all- encompassing can’t help but feel anticlimactic. After the eventual fate of many of these characters, including Gandalf, Gollum, Frodo and, of course, the ring of power, watching them bandy about again feels a good deal less than necessary.

To that end, the film also suffers from a lack of engaging development of many of the new characters we encounter. One of the secrets to the success of the first Lord of the Rings installment was the way in which it quickly established a vibrant and memorable set of warriors, a thrown-together lot of men, dwarves, elves and hobbits that led to various tensions and intriguing character possibilities.

Here, few dwarves have much to distinguish them. There’s a super-obese one who always wants to eat, a bit of a simpleton who chooses to fight with a slingshot rather than a sword and the Dwarf King, who is filled with anger and honor and fights for the lives of his people in the most tedious way imaginable; you might as well have dubbed them Fatty, Simple and Hostile and let it go.

The question that hovers over the whole enterprise is why Jackson has come back to such a familiar place, to show us many of the same things, other than to add a few bizarre musical numbers to the proceedings (the dwarves are a deeply musical race, apparently). Cynics might suggest that the studio behind the series, New Line, is struggling following the financial and critical success of the first trilogy and can use the juice of a new triad. And an argument could be made that Jackson, who’s only made the disappointing King Kong and troubled The Lovely Bones in the decade since his greatest artistic triumph, also desperately needs to rekindle the magic of the first trilogy.

In that sense, Jackson’s on his own quest of sorts, a way back into the good graces of critics, mass audiences and dedicated fanboys the world over. For now, let’s just say this new “unexpected journey” has started out with more than a few stumbles.