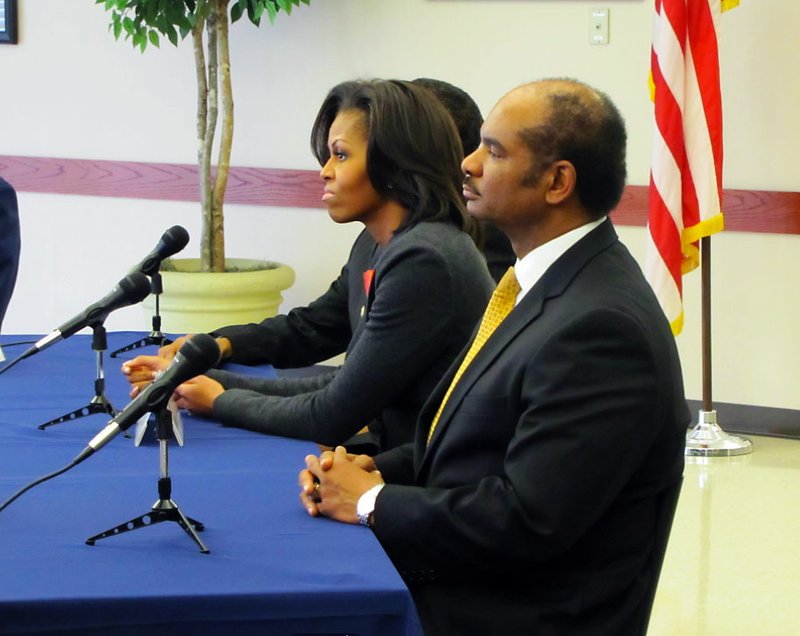 Michelle Obama (left) attends a briefing with Little Rock Air Force Base officials about the success of her "Let's Move!" initiative. ( Gavin Lesnick)

LITTLE ROCK AIR FORCE BASE — Military bases across the country will soon start serving healthier foods under a plan announced Thursday by the Department of Defense and First Lady Michelle Obama at the Little Rock Air Force Base.

Obama, speaking on the first day of a three-day national tour in support of an initiative aimed at combating childhood obesity, toured the Arkansas base's dining hall, which was part of a special pilot program to enhance food quality and variety.

Obama said the nationwide program would involve updating the menus at more than 1,000 military dining facilities, following the example at the Little Rock base. The focus on healthier fare includes increasing the availability of fruits, vegetables and whole grain options.

"This is a model for what we will see throughout the Armed forces," Obama told a crowd of several dozen Little Rock airmen, jokingly thanking them for eating their vegetables. "So you are ahead of the curve."

Officials say the changes at the bases will help address a serious issue for the nation's military. More than a quarter of citizens 17 to 24 years old are too overweight to serve in the military and the Department of Defense spends more than $1 billion each year on medical care associated with excess weight and obesity.

"This truly is a national security issue," Obama said.

After touring the dining hall, getting a briefing from base commanders and making remarks on the program, Obama walked around the dining area, chatting with the airmen in attendance.

Airman Angelica Punla said she was excited to tell Obama about her family history in the military - she followed in her father's footsteps - and about how the improvements in food have been a welcome change.

"I ate here a lot more when the food got healthier," she said. "I can grab the fruit cups and bring it to work as something to snack on besides junk food. It encourages me to eat healthier."

Before the stop in Arkansas, Obama's tour in support of her "Let's Move!" campaign took her to Des Moines, Iowa. Other events are planned this week in Texas and Florida.