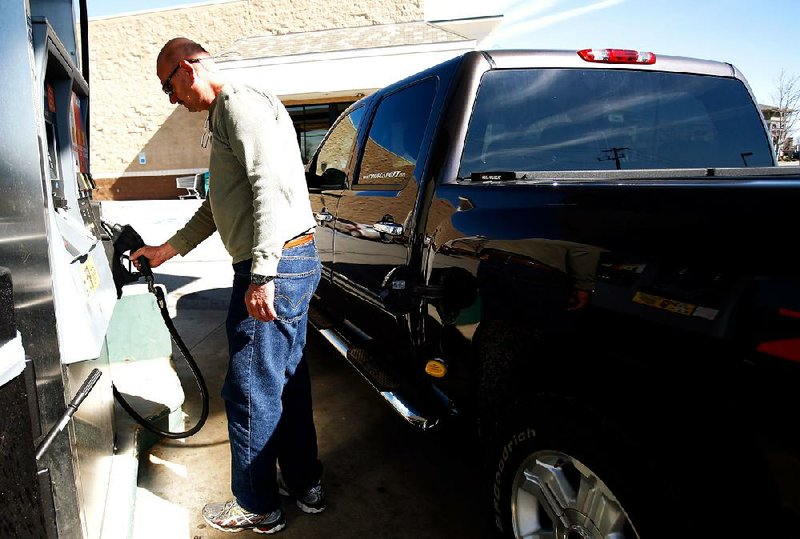 Jeff Hunter of Lowell fuels his truck at the Harps store in Springdale on Tuesday, Feb. 21, 2012. Regular unleaded gasoline prices for the location were $3.379/gallon.

LITTLE ROCK — The average price of regular gasoline in Arkansas is up 20 cents a gallon from a month ago on higher crudeoil prices due to turmoil in the Middle East, the improving economy and market speculators.

Much of the increase is attributed to tensions between Iran and the European Union.

“If people even think there is a 2 percent chance something could happen in Iran, like Israel bombing Iran, or Iran doing something malicious in the Strait of Hormuz, people are going to buy into higher future crude-oil prices,” said Tom Kloza, chief oil analyst at Oil Price Information Service. According to the U.S. Energy Information Administration, about 17 percent of the global oil supply passes through the strait, gateway to the Persian Gulf.

Benchmark crude rose by$2.65, or 2.6 percent, to end Tuesday at $106.25 per barrel on the New York Mercantile Exchange. That's the highest price for oil since May 4.

Crude prices jumped more than $1 in about 20 minutes after Iran’s Foreign Ministry told reporters Tuesday that a United Nations team visiting Iran has no plans to inspect the country’s nuclear facilities and will only hold talks with Iranian officials. There are concerns that Iran is seeking to develop nuclear weapons.

Over the weekend, Iran said it will stop selling oil to Britain and France in retaliation for a planned European oil embargo this summer. The move was mainly symbolic - Britain and France import almost no oil from Iran - but it raised concerns that Iran could take the same hard line with other European nations that use more Iranian crude.

The European Union buys about 18 percent of Iran's oil exports, though most of that comes from sales to just two countries: Italy and Spain.

While tension over Iran has grown in the past few months, the price of oil and gasoline has leapt far beyond conventional supply-and-demand variables. Financial speculators are piling into the market, ratcheting the Iranian factor into ever-higher prices.

“Speculation is now part of the DNA of oil prices. You cannot separate the two anymore. There is no demarcation,” said Fadel Gheit, a 30-year veteran of energy markets and an analyst at Oppenheimer & Co. “I still remain convinced oil prices are inflated.” Cameron Hanover energy analyst Peter Beutel said, “We have every reason to expect to see prices advance on this latest Iranian news.”

According to Kloza, crudeoil prices are also rising higher on better economic news in the United States.

“The price of crude oil is a vote on ... growth in the U.S. and in the world,” Kloza said. “Stock market prices are seeing highs they haven’t seen since 2008.”

The Dow Jones industrial average broke 13,000 brieflyon Tuesday for the first time since 2008.

“But oil prices could hamstring economic growth,” he noted.

Dan Flynn, an energy commodities trader with PFGBest, said crude-oil prices were higher this year than last despite lower demand but demand could go up along with gasoline prices if the economy continues to improve.

While filling up his work truck at a Shell station on Broadway in downtown Little Rock, Ricky Youngblood, owner of Youngblood Electric, said he hasn’t raised his prices yet but if gasoline hits $4 a gallon, he would have to “take a serious look” at his pricing structure.

“Right now I just have to be a lot more mindful about my driving habits,” he said. “I try not to drive all over the place, rather I finish one job and go to the next closest job and work my way back throughout the day.” James Williams, an energy analyst and owner of WTRG Economic near Russellville, said that on any given day in the U.S. there is about a 22-day supply of gasoline and the current price reflects what crudeoil prices were within that 22 days.

“I wouldn’t expect lower gasoline prices in the near future,” Williams said.

In Arkansas, the Pine Bluff metro area had the most expensive gasoline, averaging $3.47 a gallon. The price was $3.43 in the Little Rock-North Little Rock area, and $3.36 in Northwest Arkansas. The price in Texarkana was $3.43 per gallon.

Information for this article was provided by Chris Kahn of The Associated Press and by Kevin G. Hall of McClatchy Newspapers.