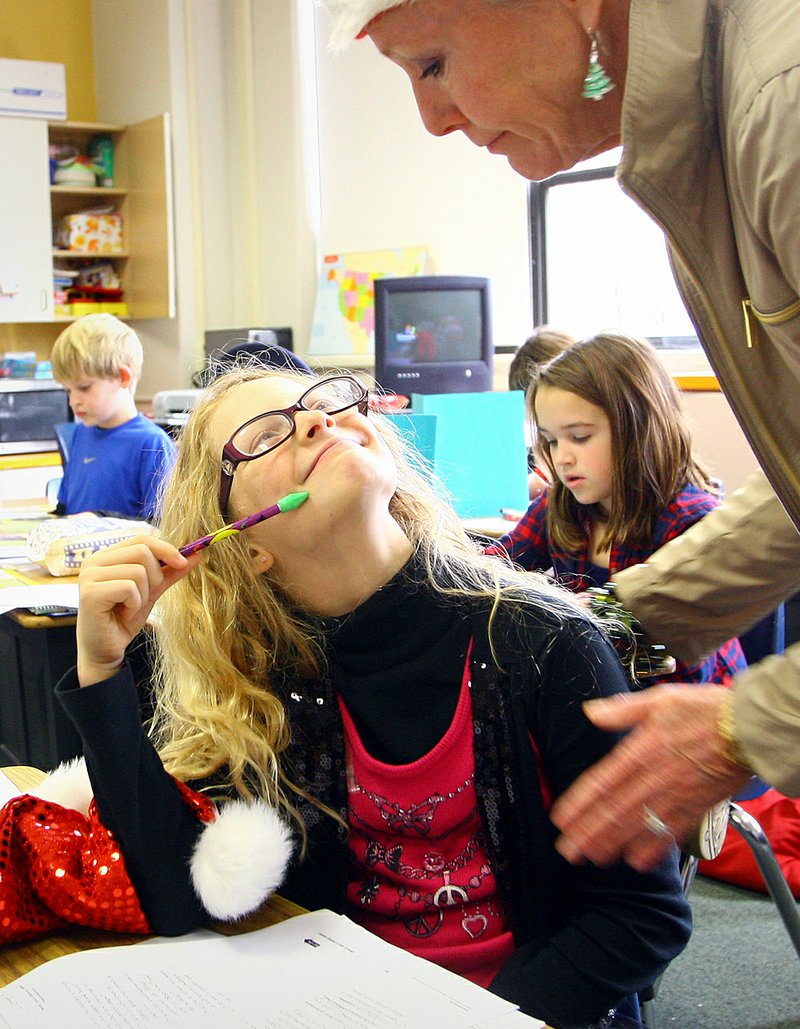 Forest Park Elementary School third-grader Jayda Perry, 8, gets some encouragement from her teacher Toni Thrash during a test at the Little Rock school.
READ MORE

LITTLE ROCK — Arkansas students scored just above the national average on the Iowa Test of Basic Skills last spring, landing at the 57th percentile on the exam that compares Arkansas achievement with that of a national sample of test-takers.

But a statewide score doesn’t necessarily tell the whole story.

The school-by-school results - as calculated by the University of Arkansas’ Office for Education Policy - show a far more varied performance by the state’s students in kindergarten through ninth grades on the nationally standardized exam.

Some individual schools had overall percentile ranking scores at heady heights, far above the 50th percentile that is considered the national average. The now closed Woodruff Elementary School in Helena-West Helena, for example, achieved at the 96th percentile ranking, meaning its 157 kindergarten pupils on average did as well as or better than 96 percent of the national test-takers.

But other schools weren’t within waving distance of the national average. Those low-performing schools were sometimes in the same districts as high-performers.

The range in the percentile rankings and the comparisons nationally are significant because students attending the Arkansas schools - be they high-performing schools or not - will very soon have to compete with one another for college admissions and for jobs in the state and nation.

“I would view this as one data point to keep track of in a larger set of data points,” Gary Ritter, 21st Century Endowed Chair in Education Policy at the University of Arkansas at Fayetteville and director of the Office for Education Policy, said about the test results.

“It’s an imperfect science, of course,” Ritter said of assessing school performances. “I would look for all those schools that seem to be doing well on all the other measures, whether it is year-to-year growth, whether it is winning this state award or that state award. It’s worth checking on how consistent is the story.”

Arkansas students take only the math, reading and language arts - and sometimes the science - portions of the Iowa Test, developed by University of Iowa educational researchers and produced by Riverside Publishing, which is part of Houghton Mifflin Harcourt publishing company.

In third through eighth grades, the Iowa Test is blended into the state’s own Benchmark Exam, so the questions from the nationally standardized exam aren’t easily distinguished from those of the state test. The Benchmark Exam is used by the state to comply with the federal No Child Left Behind Act and has been the test on which schools can be penalized or rewarded for academic performance.

The Iowa Test isn’t the only exam that assesses how Arkansas students are achieving compared with those nationwide.

Most recently, Arkansas’ fourth- and eighth-graders scored slightly below the national average on the National Assessment reading and math tests. A total of 6,300 Arkansas students took that national math test, and another 6,300 took the reading test between Jan. 24 and March 4 , 2011. The students were from 262 of the state’s more than 1,000 public schools.

In contrast, about 358,000 Arkansas students in grades kindergarten through nine took the Iowa Test last spring. Individual student results from the Iowa Test are provided to parents. There are also grade-by-grade results for each school and district, but no overall school result and no state-by-state comparisons.

The grade-by-grade score for each subject area at each school, however, doesn’t lend itself to assessing a school’s overall performance. And grade-by-grade percentile rankings at a school can’t be averaged to produce a school average.

“It’s hard to make sense of the scores as they are currently reported,” Ritter said.

The average normal curve equivalent score for each school was then converted to a percentile ranking, which is the most common method for reporting standardized test results to parents and the public.

Students in elementary schools tended to produce higher results than students in the upper grades. Kindergarten-only schools stood out as high-performing in last spring’s testing. That is at least partly because there are no scores from the higher grades to temper the kindergarten averages, Ritter said. Kindergarten centers in Helena-West Helena, Siloam Springs, Ozark and Mountain Home reported some of the top percentile results in the state.

“Kindergarten scores are just different,” Ritter said. “They are just higher across Arkansas. It probably has something to do with the assessment instrument and the difficulty of getting a good read on kids’ abilities when they are only 5.”

Beginning with this school year, the Arkansas Department of Education will no longer require schools to administer the Iowa Test to kindergarten students.

Helena-West Helena is home to the highest-performing Woodruff Elementary School kindergarten campus and one of the lowest-performing, Central High, which was at the 25th percentile.

Suzann McCommon, state-appointed chief executive officer of the Helena-West Helena district, suggested that Woodruff ’s showing at the 96th percentile was in part the result of a unified and proud staff. She also said kindergarten results are an indication of a child’s readiness to learn rather than a measure of achievement.

Woodruff was closed after last school year as a money-saving measure, and kindergarten pupils are now split among three elementary schools. The Helena-West Helena district was taken over by the state last June because of financial problems.

McCommon said she’s not surprised by the gulf in the results for Woodruff and for that district’s Central High.

“That kind of a scatter is not unusual for us in eastern Arkansas,” she said. “Our kids, as they get older, don’t become less knowledgeable. But what has happened, I think, through the education years, is that we’ve missed that boat somewhere.

“That is something that we are trying to address. Our teachers are. Right now we have a group of teachers looking at data, attendance and discipline. All those things start entering in and affecting our kids, particularly the older they get.”

There are other districts with schools at the extreme ends of the Iowa Test spectrum.

Cloverdale Middle, and Hall and J.A. Fair high schools are among the schools previously identified by the Arkansas Department of Education as some of the lowest-performing in the state. As such, the three schools receive millions of dollars in federal School Improvement Grants.

Principals at some of the Arkansas schools that had the highest test results said their students typically score well on a range of exams - not just the Iowa Test. The principals attributed the successes to a well-trained, long-standing faculty; supportive and engaged parents; and, in some cases, a technology-infused curriculum that emphasizes hands-on problem-solving.

“We are an International Baccalaureate school, and we really feel that it is our curriculum that helps students to be successful on those tests,” said Becky Rosburg, principal at the 310-pupil Park Magnet School in the Hot Springs School District.

Her school achieved at the 83rd percentile last spring, according to the Office of Education Policy calculation.

“Students learn through inquiry-based teaching strategies,” Rosburg said. “It’s a very hands-on program. We really feel like those things transfer over when the students are in the testing situations. They are able to think critically to solve those problems.”

The International Baccalaureate is a nonprofit educational foundation that has developed academically challenging programs for students ages 3-19. The foundation works with 3,313 schools in 141 countries.

“Our units of inquiry are teacher-directed but student-driven,” Rosburg said. “Teachers pose questions. But from the student questions that come up - that is the direction the inquiry moves in.

“Students ask questions and the class starts to learn. We have six units of inquiry at each grade level, and they are transdisciplinary. The students do reading and math and social studies - all within these units - and many times they don’t realize they are studying a certain subject because it is built into the unit of study.”

First-graders at Park recently finished a unit on community helpers by creating a brochure about the city of Hot Springs, Rosburg said. Lessons on using different kinds of technology - such as digital cameras, PowerPoint presentations and iPads - are part of the class work at Park, all of which aided in the production of the brochure.

“It is so engaging for kids,” Rosburg said. “They actually see the real-world applications for what they are learning in the classroom. Once students are engaged in learning, they internalize it and they see a purpose for it, and they run with it.

“It is amazing some of the things they can create.”

College Hill Elementary in Texarkana is another one of four authorized International Baccalaureate primary programs in the state, and it is similarly high-performing, scoring at the 80th percentile last spring on the Iowa Test.

The 230-pupil Viola Elementary School in Fulton County, which borders the Missouri state line, performed at the 82nd percentile on the Iowa Test last spring.

Principal Buddy Burden said his school, which is in a farming community, typically scores well on exams.

“We do the basics, and we try to do them real well,” Burden said.

“We do offer trips and assemblies - rewards - throughout the year. We try to do something every two months. That gives the kids something to look forward to. That seems to help. They know they are going to get something if they do what we are asking them to do. We take them to the movies or to the zoo in Little Rock or to see plays like Huckleberry Finn.

“We don’t say they have to pass the tests to go on the trips, but we have to know they tried their hardest.”

Burden highlighted the smallness of the school - two classes per grade - the use of aides in the early grades to help struggling pupils, a zero tolerance policy for students who don’t do their homework and the support of parents as reasons for the school’s successes.

“I’ve never had a parent question me about why I did what I did on an incident,” said Burden, who has been on the job for 10 years. He is also a bus driver for the district.

The highest-scoring middle/high school was the Haas Hall Academy, an independently run public charter school in Fayetteville, which performed at the 81st percentile.

McNair Principal Melissa Hayward is an advocate for project-based learning and getting technology into the hands of her students.

“The technology is right there, and they are using it all the time. Instead of having kids ‘power down’ when they come to school, we are keeping that level of relevance there by the use of technology - lots of project-based learning activities. That really does help.”

The Parent Teacher Association was instrumental in providing tablet computers for teachers. Students have access to electronic tablets and laptops, which they use as they work in groups in classrooms and in the hallways on their projects. The project-based learning has turned teachers into facilitators or guides to students who become responsible for their own learning.

Asked for an example of the projects, Hayward said: “I could tell you a million of them. She described how a science class created a wiki on animals loaded with information and photographs gleaned in part from a trip to the Tulsa Zoo. A wiki is a website that allows viewers to contribute to it without any special technical knowledge or tools other than a computer and an Internet connection.

“It looks very professional, Hayward said of the wiki. “Our students are just incredible.”

The critical thinking that students learn in doing their projects spills over to the standardized testing, Hayward said.

“If you are teaching students, and they are involved in synthesizing, analyzing, evaluating and creating, then obviously [testing] is going to be easy,” she said.