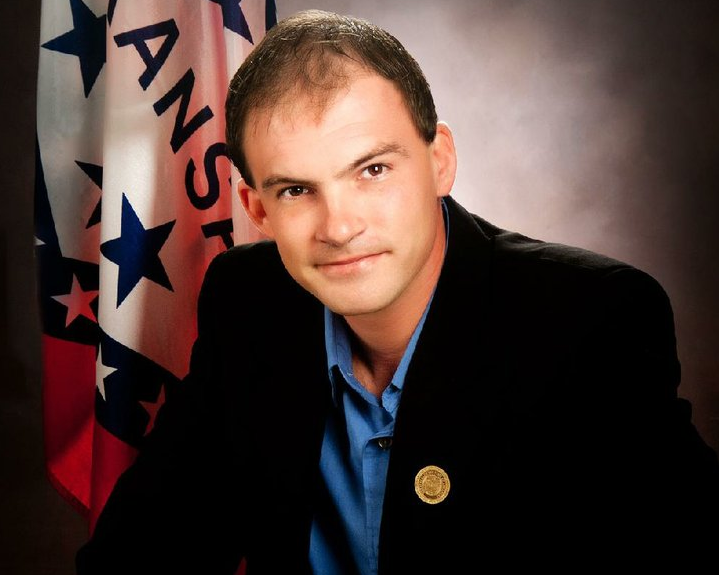 LITTLE ROCK — Third Congressional District candidate Ken Aden has claimed he’s a Green Beret, but his military records indicate he washed out of Special Forces training, not once but three times. 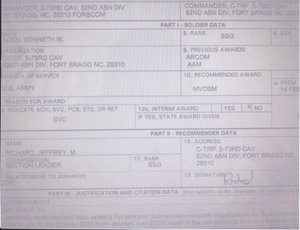 Photo by courtesy of Kenneth Aden
(1 of 2) Third District congressional candidate Ken Aden provided incomplete and poor-quality copies of documents as proof of his receipt of the Military Outstanding Volunteer Service Medal. He said it is not in his military records because he received it after he left service. He also said he was unable to send more of the document than shown here. Note the medal, which is abbreviated MOVSM is misspelled in the document. The document is the recommendation for the award, but the section sent here does not confirm he was awarded it. 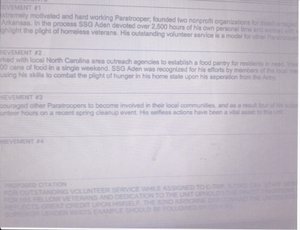 Photo by courtesy of Kenneth Aden
(2 of 2)Third District congressional candidate Ken Aden provided incomplete and poor quality copies of documents as proof of his receipt of the Military Outstanding Volunteer Service Medal. He said it is not in his military records because he received it after he left service. He also said he was unable to send more of the document that shown here. Note the medal, which is abbreviated MOVSM is misspelled in the document. The document is the recommendation for the award, but the section sent here does not confirm he was awarded it.

The discrepancies have also brought into question Aden’s academic claims. Aden claims to have an associate degree from Arkansas State University, but the registrar’s office said he never took a class there.

In a telephone interview Wednesday morning, Aden said he could have worn the coveted green beret of a Special Forces soldier if he had been assigned to a Special Forces group after graduation from the Special Forces Qualification Course, commonly known as “Q Course.” But, he said, an injury resulted in his transfer to a regular Army unit, the 82nd Airborne Division.

“I am a Special Forces qualified soldier,” Aden said. “I completed the entire course.”

He said he does not have a copy of the document proving that he graduated from the course but said he has requested a copy of his entire military file from the National Personnel Records Center in St. Louis.

The military records obtained Wednesday from the U.S. Army indicate that Aden received some training in Special Forces but didn’t complete the year-long course required to be qualified as a Green Beret soldier. Aden left the Army with an honorable discharge in December 2010.

“He is not a Green Beret,” said Janice Burton, deputy public affairs officer for the Special Warfare Center, which conducts all Special Forces training under U.S. Army Special Operations Command.

According to information gleaned from the Special Warfare Center and School administrative records tracking system and Army training records, Aden was selected for the Special Forces Qualification Course on Nov. 9, 2006. He passed the Basic Non commissioned Officer Course on April 26, 2007, and survival training on Sept. 16, 2007. Those are two of more than 10 courses required in the six phases of training needed to become a Green Beret.

On Oct. 9, 2007, four months into his training, he was bumped from the program after failing medic training “for academic reasons.”

Aden was allowed back into the program almost immediately to train as a “Special Forces weapons sergeant,” denoted as an 18B on military records. He again failed the training on March 3, 2008, “for academic reasons” and tried a third time.

On April 29, 2009, Aden failed an unknown portion of the program, again for academic reasons, eight months after he crushed two fingers in a weapons vault door. The Army had already transferred him out of Special Force straining to the 82nd Airborne Division by that time.

“If he left the Q course and went to the 82nd, he is not a Green Beret,” Burton said.

Aden has been quoted several times as saying he was a Special Forces soldier.

On Feb. 27, after announcing his candidacy at the state Capitol in Little Rock, Aden said, “I finished up my tour of duty with Green Berets, Special Forces. I did a tour of duty in Iraq and Afghanistan.” Video of that interview was still available online Wednesday at youtube.com/ watch?v=9NnONPghgZc.

At least three newspapers have reported that Aden said he was a Green Beret: The Courier of Russellville, the Evening Times of West Memphis and the Arkansas Democrat-Gazette.

In a March 19 article, The Courier quoted Aden saying, “I’m a former Green Beret. And I was making $7.75 per hour,” referring to a civilian job as a security guard.

On March 30, 2011, the Evening Times reported that Aden was “a former Green Beret” in the first sentence of an article about a 210-mile run through Crittenden County to raise food donations for charity.

Aden sent the article to a Democrat-Gazette reporter on Nov. 18 to promote a similar run planned for this spring in Northwest Arkansas. Aden didn’t indicate that there were any inaccuracies in the article.

On Wednesday, however, Aden hedged when asked about the Green Beret claim.

“Only those individuals who serve with a Special Forces unit are qualified to wear the Green Beret headgear,” he said. “As a result of my injury, I never served with a Green Beret unit.”

Medical records indicate that Aden crushed two fingers in the weapons vault door on Aug. 12, 2008. The initial triage report describes his fingers as crushed, swollen and red with limited range of motion but without any cuts.

During a Nov. 16 interview, Aden said he had “cut off” parts of two fingers with a 40-foot-long sliding door at Fort Bragg. A doctor “sewed them back on,” he said, adding that he still had numbness in the fingers.

On Wednesday, Aden said he had to have the tip of one of the fingers on his right hand reattached. That injury kept him from being assigned to a Special Forces unit, he said.

“I pleaded my case, I argued my case to stay in,” he said.

According to records provided by the U.S. Army Special Operations Command, however, his exit from the program was for academic reasons.

Yet, late Wednesday in an e-mailed response to this newspaper’s questions, Aden’s spokesman, Vince Liebowitz, repeated Aden’s assertions that he had completed the Q Course. Liebowitz is an Aden-campaign consultant based in Texas.

Aden further stated that proof of his Special Forces qualification is based on the “18B” designator listed in Aden’s official military record, known as a DD214. Q Course is not mentioned in the record.

The inclusion of the 18B on Aden’s record is a mistake, said Maj. Rebecca Lykins, public-affairs chief for the U.S. Army Special Warfare Center and School.

“It shouldn’t be [listed in his military record] because he didn’t graduate the Q Course,” she said. “Without the certificate of completion, it never should have been on his DD214 [military record]. It has to be an error, unfortunately.”

Aden released a copy of his orders that showed he passed the weapons sergeant, known as 18B, portion of Special Forces training.

That indicates that he passed one portion of training, Lykins said, not that he graduated from the year-long Q Course.

“He can finish the 18B course and be awarded 18B, but in the end, if he doesn’t graduate, he doesn’t get to keep that [18B military specialty],” she said.

She added that to have the 18B designation added to his military record when he left the military in December 2010, he should have been required to produce hisAcademic Evaluation Record to confirm graduation.

Liebowitz agreed that it was an error by the Army but said the error was in not listing Aden’s Q Course graduation. He also said the award of the 18B designation showing Aden’s training as a weapons sergeant, which comprises one phase and just three months of the 12-month Q Course, indicates he completed all six phases.

“The U.S. Army quite frequently makes omissions on the issuance of [military records] because the individuals compiling the DD214 often do not have at their disposal all records relating to the individual soldier, and often rely on that soldier to provide the records during an exit interview,” he said.

U.S. Rep. Steve Womack, Aden’s Republican opponent in the race, said he’d heard questions about Aden’s military record claims, but it wasn’t his issue to pursue.“He served his country in a combat theater,” said Womack. “That’s something I haven’t done, and it’s an honorable accomplishment. But to go beyond that accomplishment and suggest that you are a member of the Special Forces community, if not true, that’s a pretty serious breach of trust.

“Mr. Aden needs to be truthful about his military record. Making claims of being a Green Beret is very serious if not true. We’re talking about what is called in the military community ‘stolen valor.’”

Womack said Aden served under his command in the Sinai in Egypt in 2002, when Womack was a lieutenant colonel in the Army National Guard. Womack had said previously that he didn’t remember Aden.

Democrats also have been concerned about Aden’s military claims.

“I think everyone agrees that we hold our military in the highest respect,” said Candace Martin, spokesman for the state Democratic Party. “We have been under the impression that Ken Aden served in the military andwas discharged honorably. We’ll wait to learn all the facts in this particular situation.”

Checks into Aden’s academic credentials revealed discrepancies as well. Under “Meet Ken” on Aden’s campaign website, aden4arkansas.com, it states: “Ken has attended the University of Chicago and Mid-South Community College. He holds an AA from Arkansas State University,” meaning an associate of arts degree.

Beverly Weems, graduation coordinator in the registrar’s office at ASU in Jonesboro, said there was no record of Aden taking classes, although he applied and was admitted.

“It does not show a degree was awarded,” she said. “If he did receive one through us, it would show up here.”

Registrars at the ASU campuses in Beebe, Mountain Home and Newport said Aden had no academic record at those campuses.

A search of Aden’s academic records through studentclearinghouse.org indicate that he attended Mid-South Community College in West Memphis in 2011, but not that he attended the University of Chicago, which was tied for No. 5 in the nation this year in the U.S. News & World Report ranking of national universities.