Texas A&M holds off Arkansas rally in second round 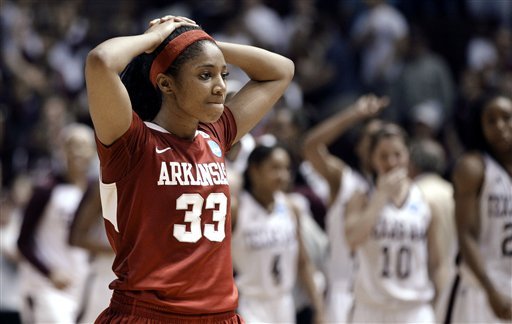 Arkansas' Lyndsay Harris (33) reacts after Arkansas' 61-59 loss to Texas A&M in the second-round if the women's NCAA Tournament on Monday in College Station, Texas.

Texas A&M overcame a late Arkansas rally and the defending national champion Aggies beat the Razorbacks 61-59 in the second round of the NCAA Tournament on Monday.

Sydney Carter hit two free throws with 23.5 seconds remaining to give Texas A&M the lead for good after Arkansas used a 21-9 run to take a lead.

Quistelle Williams, who scored a team-high 14 points, missed a jumper in the closing seconds that would have given the Razorbacks the lead after Carter's free throws.

The game was a matchup between future conference rivals. Texas A&M will move to the Southeastern Conference next season.

The Aggies are coached by former Arkansas coach Gary Blair, who led the Razorbacks to the 1998 Final Four.