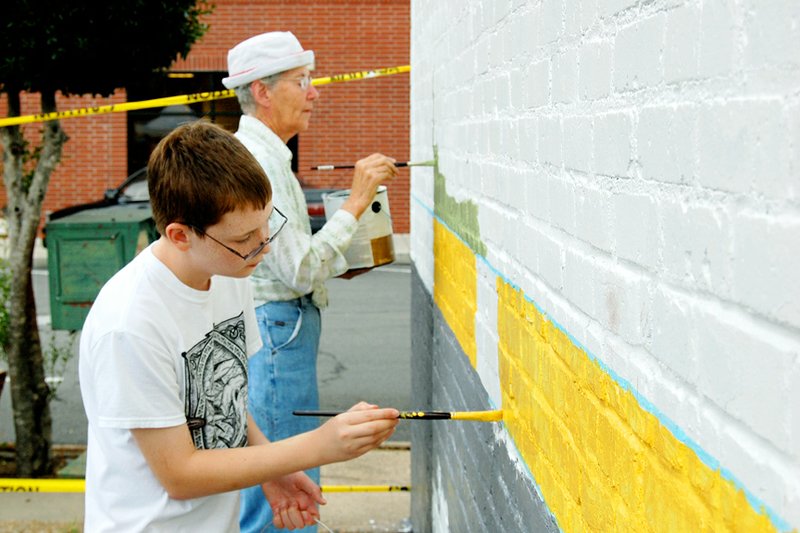 Scott Holbrook and Betty Gentry apply color to the municipal mural being created in Arkadelphia. Clark County residents were invited to paint the background of the artwork that will cover one wall of the Honeycomb Restaurant on Main Street.

ARKADELPHIA — Dozens of Arkadelphia residents gathered under cloudy skies and an intermittent mist to be part of the city’s history on Saturday.

Elementary school children painted alongside their friends, mothers and grandmothers. City officials joined newcomers and groups of teenagers to place the first colors in a municipal mural on the side of the Honeycomb Restaurant on Main Street.

“The people are putting in the background colors in sections that I have drawn in,” said Dave Loewenstein, a nationally recognized muralist from Lawrence, Kan. “They are painting from the ground up. We are not going to let them get on a lift and paint up higher. Later, I will be painting the different designs and figures.”

The city “won” the project from the Mid-America Arts Alliance in Kansas City, Mo., said Farrell Ford, a Clark County artist and interim executive director of the Clark County Arts and Humanities Council.

She said the arts alliance, along with the Arkansas Arts Council, announced a large grant for a mural in an Arkansas city and invited communities to submit proposals for their cities.

“Five cities applied, but only one city could be picked, and Arkadelphia is that city,” Ford said.

The muralist and his assistants for the project, Topeka, Kan., artist Ashley Laird, along with a mural apprentice, Jordan Karpe of Little Rock, arrived in Arkadelphia in August and toured the community.

“This was really my first opportunity to spend any time in Arkansas,” Loewenstein said. “I have been struck by the beauty of the area. It is an oasis of nature in the middle of the United States. It seems there are not a lot of people in this part of the state, but plenty of mountains, rivers and trees — lots of trees.”

The design for the city’s mural has been created by the artist based on the comments from people who have been meeting weekly to discuss what kind of painting would make the right portrait for the city, Ford said.

“As many as 50 people took part in those meetings at one time or another, but a group of about 20 kept coming back,” Ford said. “They got into it, going to the library and finding out more about the history of the area and figuring out what might best represent us.”

The artist said the 20 Arkadelphia residents who took part were the most democratic of groups.

“They selected themselves, by always showing up and getting involved,” Loewenstein said. “It is not a committee; it is a team. The members ranged in age from 8 years old to someone who was 84, I believe. They were authentic in their participation in the project. We were visitors, just listening. We don’t know the history; we don’t know a thing.”

As he often does before painting a mural in a town, Loewenstein walked around the city, once following the Feaster Trail into the woods to find the historic overlook some call the Desoto Bluff that overlooks the Ouachita River north of the city. The bluff was mentioned in some of the first reports from explorers of the region, after Arkansas became part of the United States in the Louisiana Purchase.

The regular discussions, about what scenes and symbols best caught the spirit of Arkadelphia, could become heated at times. Loewenstein said the depth of feelings and the variety of ideas expressed make the creative process of designing the mural fun.

“There were different points of view, but we worked it out together,” he said.

The team selected the theme of education, calling it a “strong part of the city’s culture and economy.”

Ford, who has helped coordinate the project from the beginning, agrees with the mural being centered on education.

“The first thing you think of is the two colleges (Henderson State University and Ouachita Baptist University),” she said. “I am not sure we could have survived without education and the students. Things are different in town when they show up each year.”

Loewenstein said the mural should reflect a sense of Arkadelphia — its place, its industry, people and aspirations. However, the artist said the project will have a poetic feel, “without a lot of who, what and where.”

The phrase created to guide the project was “The Journey From a Dream to the Promise.”

The artist said the left side of the design includes a young man sitting on a porch holding a pine seedling, symbolizing potential.

“Reaching out to the young man is an allegorical figure representing the past and present mentors and teachers who have guided Arkadelphia’s young people,” Loewenstein said as he pointed out some of the elements of the mural’s design. “With the other hand, she gestures toward Arkadelphia’s Promise.”

The Promise is a community effort that will aid every Arkadelphia High School graduate go to college, if accepted under the program’s criteria.

At the other end of the mural, the young man, with a diploma in hand, hands off the seedling to a little girl who begins her journey.

Other elements of the blockwide painting include the bluff along the Ouachita; pottery decorations from the Caddo people, who lived in the area before Europeans came; a honeycomb, a reference to the Group Living restaurant where the mural is painted; and the salt kettle that is kept in front of the Clark County Courthouse.

The volunteer painters were invited so the community could become part of the project.

“We have had people working on really big shapes and blocks of colors,” Loewenstein said. “We want people to feel ownership of the wall. It is theirs.”

Tamara Adams of Arkadelphia brought her daughters Sierra, 15; Tanner, 12; and Xander, 9, to paint on the wall after going to the Clark County Fair.

“I’m friends with a member of the local arts guild, and the 4-H has been involved in the project, and it looked like fun,” Adams said. “I brought the kids here to paint so they could be a part of history. I think it will be here a long time.”

When the weather cooperates, Loewenstein said, residents will be able to paint some more on the mural, while his team adds the detailed elements. He said the mural should be finished by mid-October if there is enough good weather.