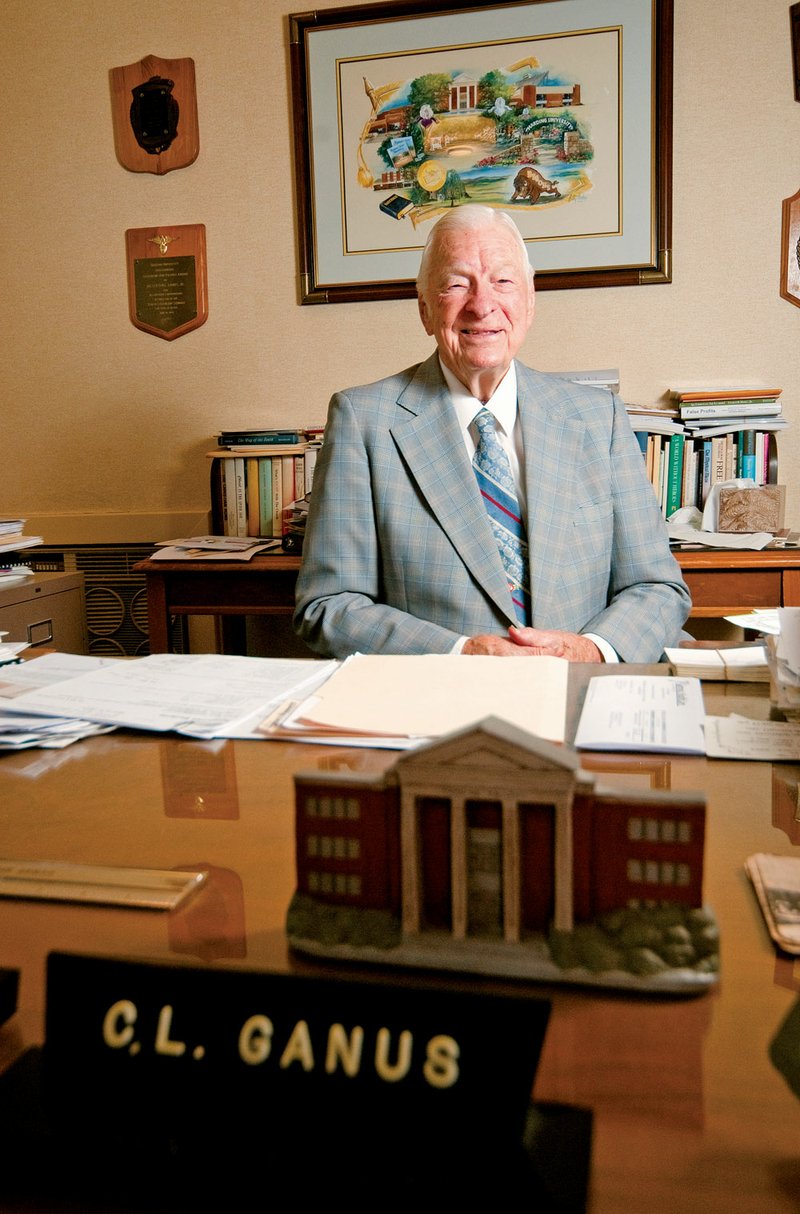 Clifton Ganus Jr., the chancellor at Harding University in Searcy, served as Harding’s president from 1965 to 1987.

Clifton Ganus Jr., chancellor of Harding University in Searcy, has never been like most other people.

At 90 years old, Ganus still maintains a regular schedule in his two-room office on campus, still attends Harding football games and travels more than many men half his age. Last spring, he and his son — along with friends Lathan and Phil Garnett — traveled 700 miles down the White and Mississippi rivers to New Orleans, camping along the way. In May, he traveled to eastern Europe with the Harding University Chorus, and he managed to find time to visit and lecture in Grand Cayman, Africa and Alaska, all before school started again.

After graduating from Harding in 1943 with majors in history and Bible, Ganus went on to preach in small churches in Mississippi and earn a master’s and doctorate in history from Tulane University before returning to his alma mater to teach in 1946. Despite saying he’d never be a teacher, Ganus has remained at Harding ever since. He continues to preach — even helping to found a church school in Uganda — a calling that has spurred much of his travel.

“My last two sermons were in Alaska,” Ganus said. “They take me fishing during the week, and I preach for them on Sunday. It’s a pretty good swap — salmon for sermons.”

Ganus didn’t know much about Harding when he first drove to the campus in 1939. Born in the Dallas area, Ganus and his family moved to New Orleans in 1929, and his father later opened a chain of drive-in stands, restaurants and cafeterias in the area.

“I started working with them at age 10, filling the trays,” Ganus said. “The carhops would take the orders, and I would fill the trays with sandwiches and drinks and chips. I kept wishing I could be a hop. … They got tips.”

“I wanted to go play football somewhere, but [Benson] talked me into coming and being in the band and orchestra,” Ganus said. “I did everything while I was in college: chorus, glee club, all the intramural sports, and I preached nearly every Sunday.”

On his first day on campus, a Wednesday, Ganus met a girl named Louise, from Strawberry, who pointed him toward the administration building. He saw her again at dinner, then at a prayer meeting. On Friday and Saturday, they took walks through campus. On Sunday, they went to church together.

“School didn’t even start until Monday, and I already had my wife,” Ganus said. “That’s pretty good.”

Following his father’s advice to not get married until after he graduated from college, Ganus married Louise in 1943 at 1 p.m., an hour and a half after his graduation ceremony. In 1993, the couple celebrated their 50th wedding anniversary with a trip across the world, making stops in Australia, New Zealand, Singapore, Malaysia, Thailand, India, Nepal, Ukraine and England. Today, Ganus and his wife, who turned 90 in February, live in a brick house on the edge of campus, which they built more than 50 years ago. They consider themselves fortunate that their three children (two of whom teach at Harding), 10 grandchildren and eight great-grandchildren live nearby.

In Ganus’ office, the shelves are crowded with memorabilia: flags, dusty medals, a football from a 1965 game, Happy Boss’s Day mugs, and bison, the school’s mascot, along with sculptures and paintings from around the world. He has worked in the same office suite for more than 20 years, assisting with fundraising, public relations and student recruitment. This May, he will pack up and move to a new position as he retires from the title of chancellor. Current university President David Burks will inherit the chancellor role after his own retirement, and Ganus will gain chancellor-emeritus status.

When he first came to Harding University as a student, the campus held 379 students and 22 teachers in just three main buildings. Today, Ganus works with groups of around 300 teachers and nearly 7,000 students in more than 50 buildings. Though Ganus fell in love with Harding quickly, he never thought he’d still be working with the university 73 years later.

“I never dreamed that I’d live this long,” Ganus said. “Being 90 ain’t for sissies.”