Law on selling raw milk has some over the moon 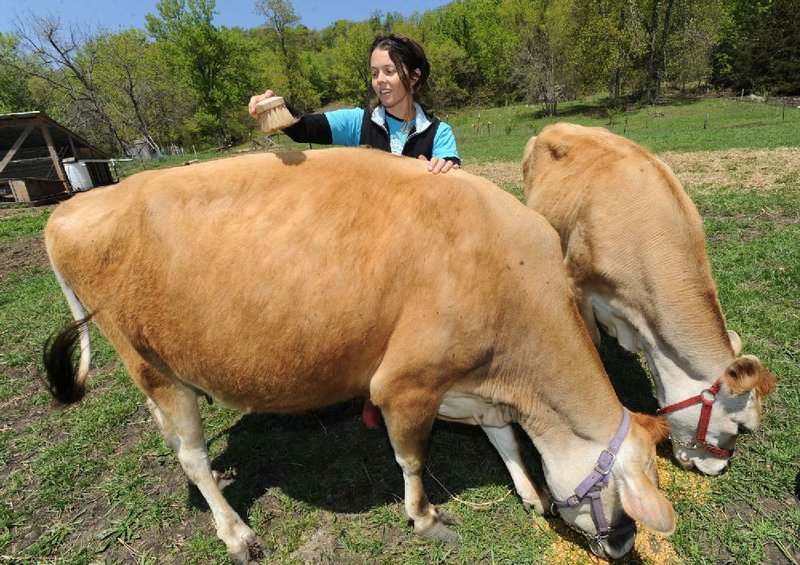 Some call it raw milk. Others use the terms whole or sweet. Whatever you call it, farmers will be able to legally sell it in July in Arkansas.

Legislation allowing the sale of unpasteurized milk in the state made it through the General Assembly in April and was signed into law by Gov. Mike Beebe.

The new law allows monthly sales of up to 500 gallons of unpasteurized milk on farms, but the moo-juice can’t be sold at farmers markets or retail outlets. According to the Farm to Consumer Legal Defense Fund, a nonprofit that advocates for consumer access to raw milk, a variety of laws govern raw milk throughout the country. The direct sale of unpasteurized milk remains illegal in 18 states.

According to the Food and Drug Administration, pasteurization is the process by which harmful bacteria is killed by heating milk to a specific temperature for a standard amount of time. The process was invented by French chemist and biologist Louis Pasteur and was first used in a commercialized process in the 1880s.

Under the new law: Arkansas farmers must post a sign at the farm and all their product must display a standardized label noting that the milk is unpasteurized.

The farm and cows are not inspected by the state.

The buyer assumes all liability for health problems that may arise from drinking the milk.

Mariah White and her husband, Ira, run the 18-acre Summer Kitchen Family Farm just south of Fayetteville on Wilson Hollow Road. They plan to sell raw milk once it’s legal. The farm has one milk cow now, a Jersey named Scarlett, and her calf, Annalies.

The farm has been in operation a little more than two years and sells pasture-raised hogs, free-range chickens, eggs and vegetables though a community-supported agriculture subscription service and at the two Fayetteville Farmers Market locations.

Mariah White said being able to diversify what the farm sells is a real benefit and the milk sales will help the farm’s bottom line.

“We have people asking us all the time to sell them raw milk,” she said.

The bill’s sponsor, Rep.Randy Alexander, R-Springdale, framed the legislation as a food-freedom issue, noting that consumers were demanding the product and knew best whether it was a sound decision to drink unpasteurized milk. The Arkansas Agriculture Department, the state’s Milk Stabilization Board and the Arkansas Department of Health were against the law, contending that drinking un-pasteurized milk is a consumer-safety concern.

Language in the bill calling for the Department of Health to inspect the operations where raw milk will be sold was scrapped, but the bill does include language putting the department in charge of making rules governing the milk’s sale. The legislation allows for consumers to ask to inspect barns and cows where they buy unpasteurized milk.

In an e-mailed statement, Ed Barham, a spokesman for the Arkansas Department of Health, said the sale of unpasteurized milk causes the department significant concern. He noted that pasteurization kills harmful bacteria that can cause serious illness or death, especially in children, older adults and pregnant women.

“The exclusion of any oversight or regulation within the recently passed legislation in Arkansas, coupled with the associated health risks, severely limits the department’s ability to prevent disease and protect the public’s health,” he said in the statement.

He said the department will have no oversight of the farms or the milk they produce.

Lee Richardson, a chef who once worked for the Capital Hotel in Little Rock, is a supporter of the new law. He called unpasteurized milk a “living food” loaded with important and beneficial bacteria that aid health and digestion. He said those qualities are lost when milk is pasteurized.

He said opening consumers’ access to healthy and natural foods is vital. He added that more and more consumers want to know where their food comes from.

“Today, milk is milk,” he said, referring to pasteurized products. He said raw milk allows for nuances in taste resulting from how the cow is fed, the makeup of the pasture it grazed in and the season.

A.J. Shapiro has a farm near Yellville, east of Harrison, and intends to sell raw milk once it’s legal to do so. Right now he has two cows and a calf. Shapiro said he’s been giving raw milk away for years so folks could make ice cream and butter, and has made a lot of friends in the process.

He said cleanliness will be key, and the farm will use the Raw Milk Institute’s common standards to guide its operations. According to its website, the Raw Milk Institute is a nonprofit organization that uses and promotes science-based food-safety principles to help create a secure foundation for the growing raw-milk movement.

“We set the bar a little high,” Shapiro said.

Ron Rainey, an associate professor and economist with the UA Division of Agriculture, Cooperative Extension Service, said it will be primarily small farmers who will be selling unpasteurized milk.

Rainey said farmers like White, who sell a mix of vegetables, eggs and other items, will have the most to gain by selling raw milk.

“The beauty of this is it allows farmers to diversify with livestock,” he explained. “It will provide year-round income they can rely on.”

Rainey said it will be interesting to see how demand for the product shapes up. Farmers also will have to feel their way along to determine how much milk they’ll want or be able to reliably produce.

Pricing also will be an issue as the farmers discover what the market will bear. Location will be key - with operations close to population centers better able to deal with the restriction that buyers must go to the farms to purchase raw milk.

Once the market begins to develop, things like branding become important, Rainey said, noting that operations that can distinguish their product through quality, consistency or superior customer service will be able to charge a premium price.

Allen Rhein and his wife, Cindy, run the 17-acre Rhein-O-Ranch in Bismark, south of Hot Springs. They have five cows and a bull. They also raise hogs in the winter, chickens and turkeys for their own consumption, and goats. They plan to sell raw milk.

“It will make a big difference with my operation,” Rhein said. “It will be a big help.”

He said a milk cow can provide about 8 gallons of milk a day. Assuming Rhein could command a price of $6 to $8 a gallon for his raw milk and he could keep his production costs stable, he said he could see a profit of $4 to $6 on each gallon sold. If he could produce the maximum of 500 gallons a month, he’d clear at least $2,000.

“That’s nothing to sneeze at,” he said.

He said he plans on feeding his cattle high-quality grain along with pasture grass and hay.

Rhein said the business isn’t easy and requires dedication. He predicted that some farmers will hurry to get into the business but will fall away as they discover the man- hours required.

“You have to milk twice a day, everyday, whether you like it or not,” he said.

Print Headline: Law on selling raw milk has some over the moon