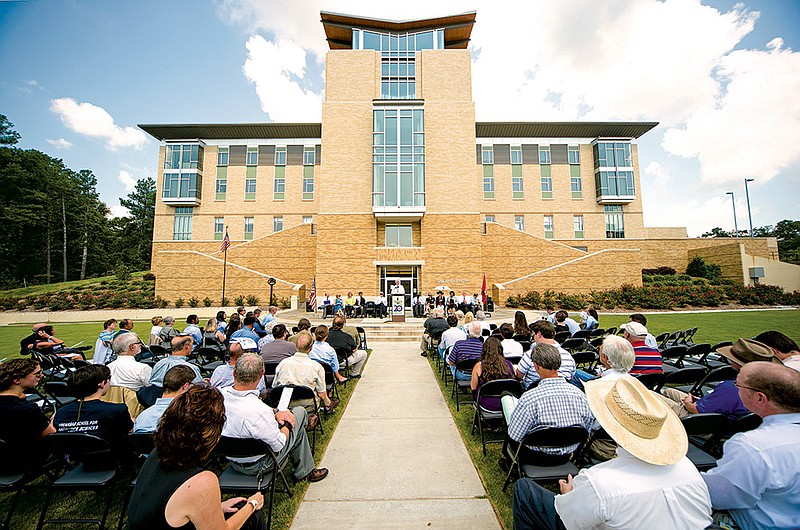 People gathered in front of the new residence hall at the Arkansas School for Mathematics, Sciences and the Arts in Hot Springs during a ceremony marking the 20th anniversary of the school.

HOT SPRINGS — In 1991, then Gov. Bill Clinton formed a committee to explore the idea of opening a high school of advanced studies for Arkansas students.

The governor and the state’s first lady, Hillary Clinton, strongly supported the idea, even though many said that students would not want to leave their homes and schoolmates to attend a residential school with more-challenging academic courses during their junior and senior years.

However, the idea prevailed, and on Aug. 23, 1993, the first class entered the school in Hot Springs, the hometown of President Bill Clinton. On Friday, the Arkansas School for Mathematics, Sciences and the Arts celebrated its first 20 years with a ceremony in front of the student center as the new class of 2015 entered the school.

The program, ASMSA … A Promise Kept, featured speakers talking about the school’s early efforts to become established and to overcome the doubts of its opponents.

“It was a hard road,” Johnnie Roebuck, chair of the ASMSA Board of Trustees and a former state legislator, told the gathering at the celebration.

Skip Rutherford, dean of the University of Arkansas Clinton School of Public Service, who served on the site-selection committee for the school and was a member of the school’s first advisory board, praised the city of Hot Springs and its residents for wanting and supporting the school.

The city, with the support of then Mayor Helen Selig, raised $1 million in 30 days to outbid other proposed locations so the school would be in Hot Springs.

“Certainly, Helen was one of the greatest champions on the local level for bringing the school to the city,” ASMSA Director Corey Alderdice said. “Folks not only from Hot Springs and the surrounding community, but educators and stakeholders from throughout Arkansas, brought the school into its existence.”

Alderdice told the audience that the school was ranked at number 13 on the 2013 America’s Best High School list published in Newsweek and on The Daily Beast.

“Anniversaries are a wonderful time of reflection,” he said.

The event was the opening of a larger alumni weekend. School spokesman Donnie Sewell said about 50 graduates returned to the campus for the celebration.

Speaking at the Friday ceremony was Dr. Mac Madden, president of the first graduating class in 1995, who said his experience at the school prepared him for success in college and medical school.

Lindsey and Jack Waddell are instructors in the science department. Both graduated from the school in 1999. Lindsey holds a Bachelor of Arts degree in geology from Smith College and a doctorate in oceanography, marine geology and geochemistry from the University of Michigan. Jack, who teaches physics and astronomy, received a Bachelor of Science degree in physics from Worcester Polytechnic Institute and a doctorate in physics from the University of Michigan.

Josh Ulrey was a member of the 1995 class and now teaches algebra, pre-calculus, advanced geometry and Topics in Pure Mathematics at ASMSA. He earned bachelor’s and master’s degrees in mathematics from the University of Arkansas.

“The main way I benefited from ASMSA was the social preparation you learn by living among peers, not your parents,” he said in a 2009 interview. “I learned how to take responsibility for everything from completing my homework to getting my laundry done. I didn’t have to adjust as much as other students did.”

He said the students at ASMSA are “more mature” than most high school students, and “are more eager to learn.”

Along with the mid-day Friday event, the school held a student-alumni reception that evening, and there was a meeting of the Alumni Association and Friends of ASMSA on Saturday.