Freshman ahead of the curve 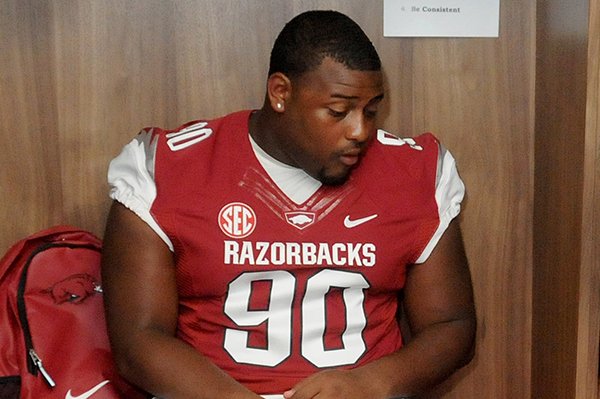 Bret Bielema made it clear when he was introduced as Arkansas’ coach that he wanted to recruit uncommon men to be a part of the Razorbacks football team.

That is exactly what he got when Ke’Tyrus Marks signed with the Razorbacks in February, according to West Palm Beach (Fla.) Suncoast Coach Jim Clark.

Marks At a Glance

NOTEWORTHY Rated a three-star recruit by Tom Lemming. … Had 60 tackles and 19 sacks as a senior. … Recorded 38 tackles, recovered 2 fumbles and forced 1 fumble as a junior. Had 47 tackles, 7 sacks and 3 forced fumbles as a sophomore.

Clark said it didn’t take long for the Suncoast football staff to realize just how valuable Marks was to their program after their arrival last season.

“It was like having another staff member,” Clark said. “It wasn’t like we just had another senior that’s a big-time football player. We leaned on him almost likehe was another assistant coach because he’s so mature and intelligent and grown-up.”

That doesn’t mean there weren’t times when Marks created problems for the Suncoast staff. Clark said Marks had to be held out of practice when the Chargers dressed out in full pads because he was so disruptive on the field.

“We couldn’t execute one single play on offense because he was on the field,” Clark said.

Marks chose Arkansas over scholarship offers from six other schools, including Wake Forest, Florida International and Massachusetts. He privately committed to Bielema on Jan. 23 before arriving on his official visit Jan. 25.

Marks said he was “blown away” by Arkansas fans during his visit, particularly by the reception recruits received when they were taken to a local restaurant for dinner. He went public with his oral commitment Jan. 27 as he left Fayetteville.

“The facilities were nice even without the new facility that we have,” Marks said. “I still enjoyed myself, but most of all I just felt like I was at home. I just felt like this was the place for me.”

Marks enrolled in West Palm Beach Suncoast his freshman year. The school is known for its academic reputation and was ranked by Newsweek magazine as the No. 9 high school in the nation when it comes to preparing students for college.

“It’s so difficult to get into Suncoast because it’s such a high academic school,” Clark said. “We’re proud of our sports, but they’re second to the academics.”

Marks had four different coaches during his four years at Suncoast, playing for teams that went 3-6-1, 4-8, 4-6 and 2-8 in an area loaded with traditional powerhouses.

“His recruiting suffered because he was at a school like Suncoast,” Clark said. “He knew if he would’ve gone to a different school he would’ve gotten more looks, but he also knew he would eventually end up at the right place.”

Arkansas’ lead recruiter for Marks, defensive line coach Charlie Partridge, won over Marks’ mother with a detailed presentation of what Arkansas had to offer her son and how the Hogs would look out for him while he is in Fayetteville.

Marks said Partridge let him know during the first week of practice what to focus on in order to play in the trenches on the college level.

“Technique is what you have to know to be successful in college football, and that’s what I work on every day,” Marks said. “Try to win every day like Coach Bielema said.”

Marks, who broke Suncoast’s single-season school record with 19 sacks as a senior, was chosen to play in the Florida-Georgia All-Star game and the Palm Beach County-Treasure Coast All-Star game.

“He’s got the best first step of any kid I’ve ever seen,” Clark said. “He’s lightning fast off the ball.”

Marks admitted that the speed of the college game has been the biggest adjustment he’s encountered during practice.

“The tempo is very fast,” he said. “We’re in the best conference in college football.”

Marks was one of 12 newcomers who reported to Arkansas for the first semester in June. He said he’s learned new eating habits while working with strength and conditioning coach Ben Herbert.

“If you feed the flower nutrients, give it the proper amount of water and sun, it’s going to flourish,” Marks said. “That’s how we take care of our bodies.”

Print Headline: Freshman ahead of the curve