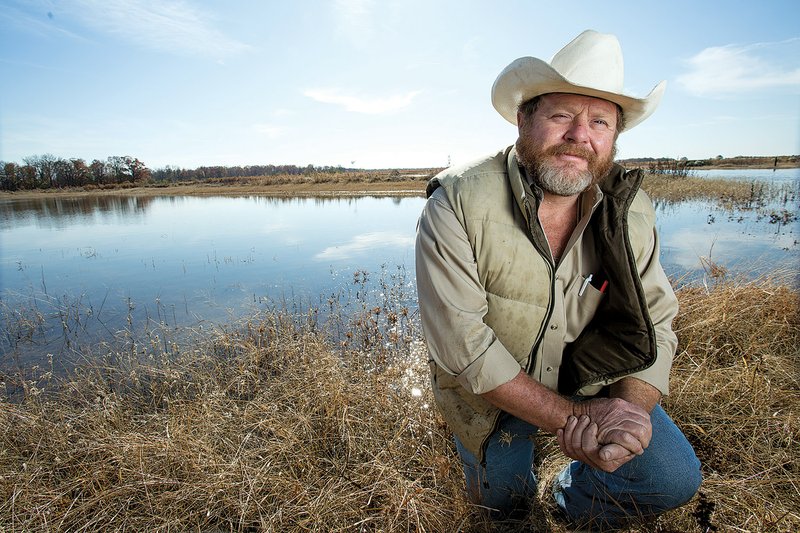 Todd Smith of Smith’s Farm in Vinity Corner is converting the family farm into a wildlife reserve for waterfowl. The Smith Farm is among 12 farms in the Three Rivers Edition coverage area to be recognized as Arkansas Century Farms. ( Nick Hillemann)

Located not too far from the city lights of Searcy, Todd W. Smith’s farm in the small rural community of Vinity Corner is a work in progress. Smith is converting the family farm into a wildlife reserve, made especially for waterfowl.

On a clear, crisp November morning, visitors met Smith and followed him into his private domain. Traveling down the levees of what was once a row-crop farm, visitors had only to look up to see a large flock of geese winging their way through the sky. A little farther down, they saw a few ducks in the water, and finally, they heard, then saw, what looked like hundreds of ducks flying off the water.

The Smith Farm is among 12 farms in the Three Rivers Edition coverage area to be recognized recently as an Arkansas Century Farm.

The Arkansas Century Farm program recognizes Arkansas’ agricultural heritage and honors families who have owned and farmed the same land for at least 100 years. The program, which is administered by the Arkansas Agriculture Department, is voluntary, places no restrictions on the land and does not require a fee.

“The land was deeded from the United States of America to Arkansas in 1853,” Todd said. “Arkansas then deeded the land in 1855 to the Cairo and Fulton Railroad, which sold the land to the St. Louis and Iron Mountain Railroad and the Southern Railway.”

Todd said John F. Rogers was the father-in-law of John Calvin Smith, who inherited the land in 1899. John Calvin passed the land on to his son, Biniom Smith, in 1919, and in 1924, Biniom and his wife, Lois, were owners of the land.

Todd said the land was all in timber when his grandfather Biniom got it and began to clear it.

“They raised 11 kids,” Todd said. “The farm was pretty self-sufficient. Later on, they raised cotton. Then in the 1970s, they switched to row crops, raising mostly soybeans. They added rice in the ’80s.

Todd said that in 2008, when the profits on the row crops got to be “marginal,” he enrolled his 380 acres in the Wetlands Reserve Program, which is sponsored by the Natural Resources Conservation Service. This program allows landowners an opportunity to protect, restore and enhance wetlands on their property.

“I went in and built moist soil units, which look like ponds,” Todd explained. “This provides a habitat for waterfowl. Our farm is also a bald-eagle restoration project.”

He maintains a private duck club on the land, one he calls the Staggs Hill Duck Club.

Todd has built duck blinds at various locations and said he has “a little more work to do.

“It’s an ongoing project. Most of the dirt work is done, and we’ve planted golden millet in the water to attract the ducks. We have identified several species of ducks — mallard, gadwall, teal, bluebill, redheads, pintails.

“We’ve also planted the land in hardwoods and cypress, along with other trees that are native to the area.”

business. He worked in a variety of farm-related jobs before joining his parents, Weldon and Phyllis Smith, in farming. He has a sister, Renee Webb, who lives in Searcy, and a brother, Craig Smith, who lives in Bonne Terre, Mo.

Todd and Cheryl, who works at First Security Bank in McRae, have three children.

Their daughter, Trella Elam, 27, lives with her husband, Clint, in Lowell in Benton County.

Their son, Kevin, 26, is a graduate of Beebe High School. He is enrolled in the University of Arkansas Autism Support Program at Fayetteville.

Schofner, lives with her husband, Danny, in Beebe with their son, Dayven, 3, and daughter, Claire, 1.

“They all show an interest in the land,” Todd said. “They’ve grown up here. We’re geared toward God first, family second, and work third.

“This will always be an important part of our family. There are lots of memories here, and we hope to make many more.”