WASHINGTON — From surveillance to sensitive criminal investigations, the Obama administration's nominee to become the next FBI director, James Comey, would be stepping into the job at a critical time for the bureau and its 13,000 agents.

Comey spent 15 years as a federal prosecutor before serving in the George W. Bush administration, where he is best known for facing down the White House over a no-warrants surveillance program. The White House made changes in the program after Comey and current FBI Director Robert Mueller threatened to resign. 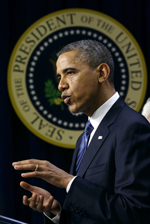