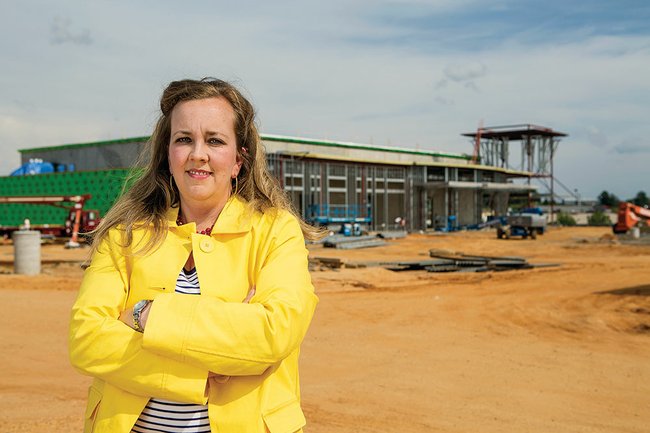 Nikki Chumley stands at the construction site of the Benton Convention Center scheduled to open in the fall. She will become the director of the facility Monday, marketing the center and the city.

BENTON — An Arkansas native and Benton resident will start Monday as the director, and only employee, of the Benton Convention Center, which is set to open in October.

Nikki Chumley, who moved to Benton with her family in 2011, is a marketing and advertising professional with experience in event planning and nonprofit organizations.

“She has a wow factor,” said Gary James, executive director of the Benton Area Chamber of Commerce. “She had a sense of the details of the job that would keep her on top of things, and she has a heart for service. She shines.”

Chumley said she was flattered by the words of praise and is eager to start promoting the convention center and Benton.

“I think I will enjoy being part of something the community is excited about, and my mind is turning with ideas about events we can have there and what we can do with [the center].”

James said around 175 resumes were received for the position, and a review of the files narrowed the list of candidates to 10. A three-person committee — made up of Holly Little, president of the chamber; Tom Baxley, a member of the A&P Commission; and Alderwoman Lori Terrell, who also serves on the A&P — interviewed seven candidates before selecting Chumley.

“My father was involved in television advertising at Channel 4 for 40 years,” Chumley said. “I grew up knowing a lot about Little Rock advertising.”

For 11 years, she was with the in-house advertising agency for Alltel Wireless.

“I was the commercial print buyer and worked with traffic,” Chumley said.

Advertising traffic manages the delivery of advertising materials and verifies that they were used as planned.

Since leaving Alltel, she has worked for Beyond Boundaries, a nonprofit organization that supports hippotherapy — using horse rides and other equine activities as therapy for children with disabilities.

“I worked in development and event planning,” Chumley said. “Marketing, advertising and events is what I have done, and it is all rolled into one for this job.”

While the start of construction on the Benton Convention Center was delayed because of an additional land purchase at the site, officials have said they expect the center to open in the fall as planned. The convention center is expected to officer banquet facilities for around 700 people, or convention seating for almost 1,000 visitors.

Meanwhile, plans continue for a Fairfield Inn and Suites by Marriott, to be built adjacent to the convention center. The finished hotel will have about 80 rooms and include an indoor pool.

Chumley said the Benton community has exceeded her expectations since her family moved to the town two years ago.

“It has a great atmosphere,” she said. “The convention center will be great at attracting people to the community, and it will be a place people in the community can use and enjoy.”

As the center’s only employee, she said her first duties will be to get things started from the ground floor.

“I think my detail work from doing traffic will help get things organized,” Chumley said. “Once the convention center is ready to open, we will look at hiring a facilities manager.”

For now, her office will be at the Benton Area Chamber of Commerce.

“I know their support will be a big help,” she said. “I’m ready to hit the ground running.”