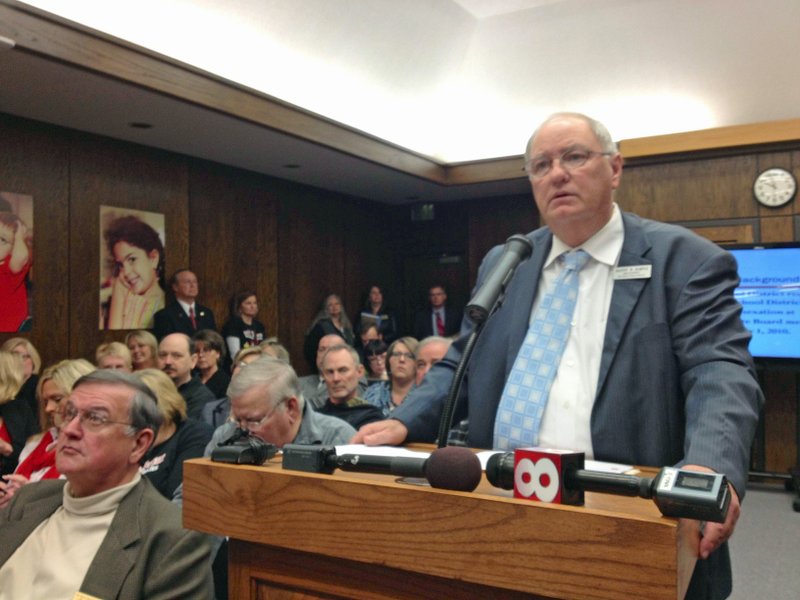 Harrisburg School District Superintendent Danny Sample speaks in favor of closing Weiner High School at a meeting of the Arkansas State Board of Education Monday.

The Arkansas Board of Education voted Monday to close Weiner High School, against the objections of some community members who had hoped to save it.

Board members voted 5-2 in favor of closing after hearing from Superintendent Danny Sample, who said the school's population decreased more than 20 percent in the past four years and that a "more rigorous" academic and extracurricular program would be available if the students were merged into the larger Harrisburg High School.

Afterward, Weiner High School supporters said they intend to fight the decision through various means, including a bill filed Friday by State Rep. Randy Alexander, R-Fayetteville, that would enact a two-year moratorium on school closures.

Michelle Cadle, a parent who attended the meeting, called the argument for closing Weiner "simply untrue." She embraced her 12-year-old son, Andrew, after the hearing. The board's decision moved him to tears.

Sample said moving the Weiner students to Harrisburg would give them access to pre-Advanced Placement classes in grades seven and eight, additional class choices and more after-school opportunities.

The closure is scheduled to go into effect next school year, unless Alexander's bill passes. It calls for a two-year moratorium on all school closings until the impact of Act 60, which required districts with fewer than 350 students to consolidate, is further studied.

"I think if you got 12 people off the street and presented the information they heard this morning, it would take them about 30 seconds to make a decision and they would have made the opposite decision," Alexander said after the vote. "I was frankly stunned."

The Weiner School District was annexed into the Harrisburg district in 2010 under Act 60.

The local school board voted 4-1 in December to close the grades 7-12 high school in Weiner, but the decision came before the state board because it wasn't unanimous.

Several community members attended the meeting in Little Rock to voice opposition to the move, including two who addressed the board.

Ray Keller told the board members that Weiner is performing in "an excellent manner" despite being on "death row" since the district consolidation.

"Can you imagine trying to study or trying to teach in that kind of an atmosphere?" he asked. "... In spite of the pressure and in spite of the stress, this school has been performing at an outstanding rate."

Keller said if the Weiner campus were closed, it would translate into big bills for students, who will need to drive the 35-mile round trip to and from school, and for families who visit with any frequency.