Newport native hopes to make a difference at home 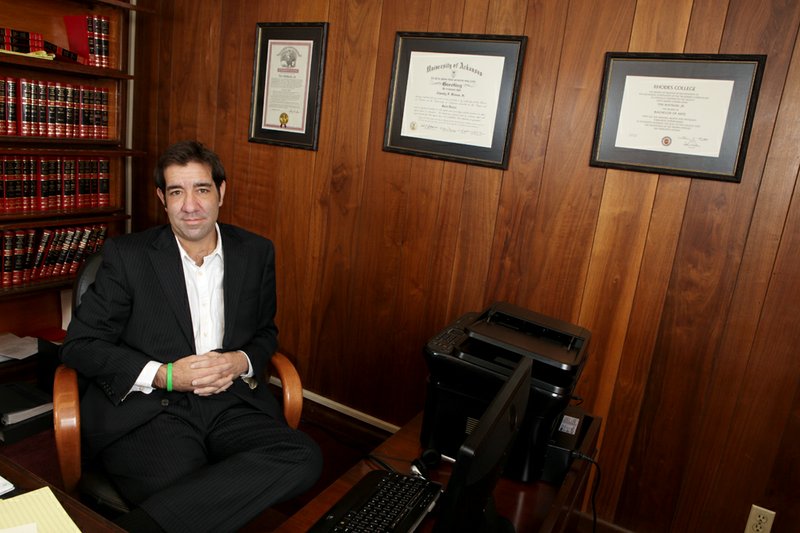 Tim Watson Jr. returned to Newport after getting his law degree from the University of Arkansas. Despite thinking he’d never move back home, Watson now has a law practice with his father — Watson & Watson Law Firm.

NEWPORT — When Tim Watson Jr. moved away from Newport, he never thought he’d end up moving home as an adult.

“Not even a little bit, not even at all,” Watson said.

But plans change. Now, his name is inked next to his father’s on the signs at Watson & Watson Law Firm in downtown Newport. It’s a big change from the kid who thought of his father’s job as “super boring,” but Watson made the move back to Newport in August 2011, and he’s been getting involved in his childhood community ever since.

Growing up, Watson was a self-described “hyper kid” with his hands in all kind of activities.

At Newport High School, he got out his creative energy in the drama club and burned off the extra playing on the tennis team. He even had a band, serving as both lead guitarist and singer.

“I’d been super energetic, but suddenly I was falling over asleep all the time,” Watson said. “They thought it was mono, but it turned out my kidneys were failing.”

Watson was diagnosed with focal segmental

glomerulosclerosis, or FSGS, a form of kidney disease. His kidneys were shutting down. So over summer vacation in 1997, Watson’s mother, Betsy, gave him one of her kidneys.

The transplant worked well for more than 10 years, but in 2008, blood tests showed that the donated kidney wasn’t working as well as it should.

“Now I need another one,” Watson said.

When a person has already had a transplant, Watson said, it can be difficult to find another kidney that the body won’t reject. Watson’s name and information are listed with hospitals and programs across the country that match donors with people in need. Despite undergoing dialysis and having a limited diet, Watson remains positive about his illness, happy to speak with people about it whenever he’s asked and always sporting a bracelet that promotes kidney-disease awareness.

“I don’t know how I stay positive, but I just do,” Watson said.

Watson, who is currently bunking with his parents in his childhood home, is in the process of buying a home in Newport. He decided to make the move home after his father, a lawyer in the city since the ’60s, talked to him about the benefits of a small-town practice.

Watson, who says he “backed into law school” after taking the LSAT as a backup plan, had at first thought of being a corporate lawyer. After attending Washington and Lee in Virginia and transferring to Rhodes College in Memphis as an undergrad, Watson attained his law degree from the University of Arkansas at Fayetteville. After graduation, he lived in England for six months, then in New York City for a year before moving to Texas, then back to Arkansas, where he finally found his calling.

“I worked for my dad on and off when I graduated,” Watson said. “One case I worked on a lot for a small farmer really helped me decide on being a small-town lawyer.”

The client’s small farm was surrounded by land owned by another farmer with thousands of acres. The farmer with the bigger property wanted the smaller farm, but the owner refused to sell, Watson said. The big-property farmer decided to put farm equipment on a shared road to block the small-time farmer’s access to his own fields, forcing the farmer to spend much more money in gas by taking a longer route.

“The farmer was looking at going bankrupt,” Watson said. “I got to go out all over the area and interview people for evidence in the case.”

Eventually, the road was given an easement, and the farmer was allowed to use and keep his farm.

“I thought, ‘This is neat,’” Watson said. “I could see my work making an impact.”

Watson sees democracy as working best in small doses, and he believed that moving back to Newport would give him the opportunity to have a bigger impact.

“I also get to learn the practice of law from my dad, who has been in the business for 45 years,” Watson said. “I like the idea of having my own clients instead of doing paperwork for the first five years.”

When he’s not working at the firm with his father and brother Todd, who just graduated from George Washington University, Watson tries to participate as much as he can in the Newport community. Watson is currently involved in several groups, including the Chamber of Commerce, The Learning Center’s board of directors, the Walnut Grove Cemetery’s board of directors and the Rotary Club.

Watson has also circled back to become a mentor for activities he participated in as a kid in Newport. He volunteers as a tennis coach at the high school and as a youth leader at St. Paul’s Episcopal Church.

“Really, this whole thing is a reminder that I’m grown up now,” Watson said. “The kids in the youth group will find pictures of me from when I was in a kid in ’92. It’s a trip.”

Though he’s only been back in town for less than two years, Watson’s weeks are already packed. When he does have free time, he likes to spend it with his girlfriend, who lives in Jonesboro, or working with his as-yet-unamed ’80s cover band.

“Being involved in the community is what I was thinking would be great about the job when I moved to Newport,” Watson said. “Newport used to be a bigger place with a stronger community, and I think that’s fallen off in the last 20 years or so. We need to get people motivated. This is the kind of place where one person’s voice can be heard.”