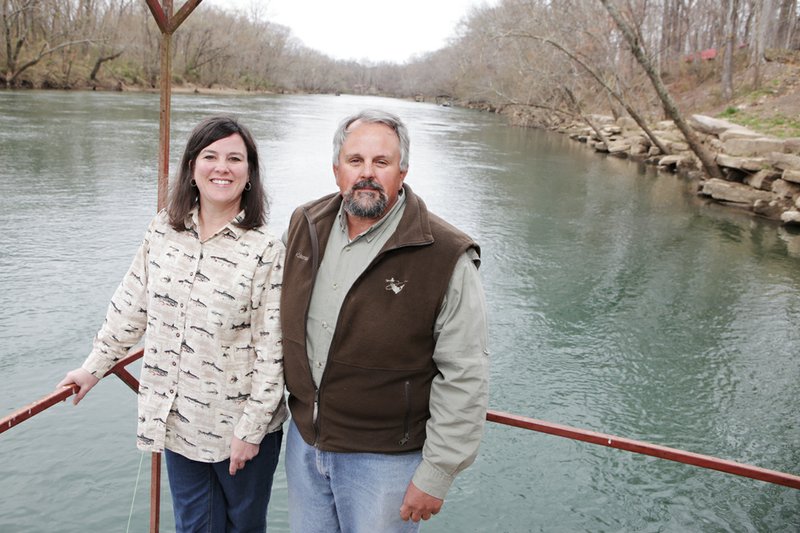 Nancy and Lowell Myers decided to simplify their lifestyle and moved from a 2,000-square-foot house in Searcy to a small fishing cabin on the Little Red River near Pangburn. Lowell spends most days on the river as a fishing guide.

Three years ago, Lowell and Nancy Myers were living a much different life. With a 2,000-square-foot house in the River Oaks neighborhood of Searcy, the couple had good jobs and were putting money toward the things they thought they wanted.

“We were chasing the American dream,” Nancy said, “but it hit us over time that we were going to work, coming home, eating, sleeping — just to go back to work and do it all over again.”

The couple realized that it was a pattern they didn’t want for their lives. They decided to make a change.

A few garage sales later, the Myerses had sold their house and nearly everything in it and relocated to their fishing cabin in Pangburn. The riverfront house is 900 square feet. It’s just enough for Lowell, Nancy, their three Labs and one simple life.

“At first, we thought we’d build a new home down the road and use the fishing cabin as a guest house,” Nancy said, “but then we realized that didn’t really sound like simplifying.”

After deciding to reduce their living space by more than half, Lowell said that there were a lot of questions as to whether the couple could do it.

“A lot of people have in mind that they’ll slow down someday,” Lowell said. “But we decided that we were going to do it now. Why wait?”

The house, perched on a bluff above the Little Red River, includes a short but steep walk to a boat dock. The Myerses worried that if they waited too long to retire and walking became difficult, they might not have as much time to enjoy the river.

Although Pangburn is just a 20-minute drive from Searcy, friends and family thought the couple were crazy to move to such a secluded place. Most of the Myerses’ neighbors are weekend visitors, so their new life is a quiet one.

“Everybody thought we were nuts, and a lot still do,” Nancy said. “The thought is that you need to work more to make more money to buy bigger houses. What we did is so contrary to what society says that we got quite a bit of grief.”

When the couple made the move, Lowell decided to quit his job doing administrative work at the Downtown Church of Christ in Searcy to take on something more suited to their new life. After leading fishing trips on the Little Red River for many years, Lowell decided to go full time. Partnering with Jeff Smith, the owner of Trout Magnet and Leland’s Lures in Searcy, Lowell opened Sore Lip ’Em All, a trout-fishing guide company. Now, Lowell spends most days out of his week on the water, guiding groups from as far as California and Colorado on half-day and full-day trips.

“I used to be caught up and driven by the numbers of fish that we’d catch each time,” Lowell said. “But after guiding for more than 20 years, I’ve come to realize that it’s about the husbands and wives or the father and son or the friends that get together. We catch a lot of fish, but there’s a lot more that goes on in the water.”

Even when he’s not teaching and guiding, Lowell enjoys spending time on the river. In the spring and fall, the couple try to get out in their canoe for a few hours as often as they can.

Nancy, once a full-time pharmacist in Searcy, now works only a few days a week as a relief pharmacist.

“We’re semi-retired now, but back then, we did whatever we wanted to,” Nancy said. “Now our salary is just a quarter of what it was. We really have to think about everything before we take a trip or buy something.”

After living their simpler life for nearly three years, Lowell said that any challenges he and Nancy faced in the beginning have been overcome.

Although she was at first nervous about reducing their closet space from a walk-in to just a 2-foot by 2-foot space, she quickly realized it didn’t matter. The couple began looking at their clothes differently, only buying new items to replace worn ones. Everything started to fit into the smaller space.

“When I really think about it now, we have one room too many here,” Nancy said. “It’s a whole different way of looking at things.”

As the couple began thinking of simplifying their life, they were inspired by their faith and the way others live their lives. When friends of the couple moved to Africa, the Myerses saw how simple the lives of people on that continent are.

“We realized even what we have now is luxury,” Nancy said. “This is big and new. We say we made sacrifices, but we really didn’t at all when you think about it.”

Lowell said a lot of his motivation came directly from Scripture, and that simplifying their space was just one part of a journey to focus on a happier, more humble life. Despite the occasional inconveniences, the couple have no regrets in their choice and agree that they’d recommend downsizing to anyone.

“I would 100 percent recommend it,” Nancy said. “Being debt-free and simplifying is a journey, and it’s been wonderful for us. We’ve discovered that less really is more.”