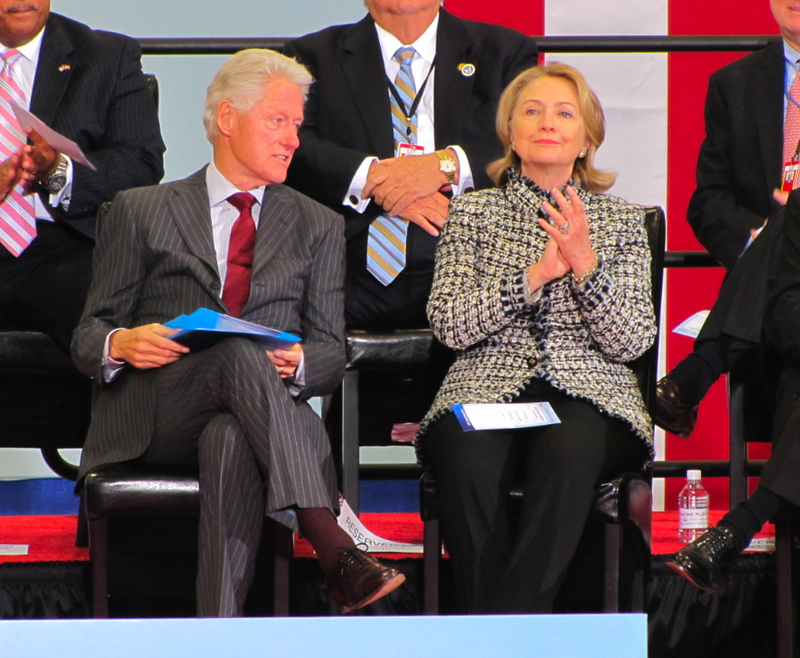 Bill and Hillary Clinton sit on stage during a dedication ceremony for the Little Rock airport named after them.

Bill and Hillary Rodham Clinton were on hand Friday for the formal dedication of the Little Rock airport renamed last year in their honor.

Bill and Hillary Clinton National Airport is the only such facility in the country named after a president and a first lady.

A ceremony, which features the Clintons, Gov. Mike Beebe, Little Rock Mayor Mark Stodola and more, drew hundreds of people to an airplane hangar adjacent to the airport grounds.

Those officials and others addressed the crowd first before Beebe introduced Hillary Clinton. She recounted flying into the airport for the first time and being met by her future husband, who gave her a tour of Arkansas.

She described that trip and other memories involving the airport that now bears her name, including serving as its commission attorney and flying out again years later for Bill Clinton's inauguration in Washington, D.C.

"This is a very profoundly deep honor for me to be here for the naming of this airport that has played such a role in my life," Hillary Clinton said shortly before introducing her husband.

Bill Clinton, too, described his memories of the airport, saying he remembers flying out of it as a college student entering a world of opportunity but with an intention to "come home again."

"The airport is a metaphor,' he said. "It lets us fly and it brings America and the world to us ... The whole idea behind our ability to take flight from this airport is we'll go and learn and be fascinated and create wealth and opportunity or be enriched in some other way. But we can always come home. We don't have to give up our roots. We don't have to give up our identity or who we are."

It began with selections by the Philander Smith College choir. The Clintons and other officials took the stage shortly after noon.

The event was originally scheduled to be held outside the airport, which is also using the occasion to mark the completion of a $67 million first phase of the an ongoing renovation project. But rain and cold moved the festivities inside to a large Hawker Beechcraft hangar on the grounds.

The Clintons, and other dignitaries in attendance, were expected to tour the renovated space immediately after the ceremony.

The airport board voted unanimously in March 2012 to rename Little Rock National Airport after both Clintons.

For more on the dedication ceremony, see Saturday's Arkansas Democrat-Gazette.