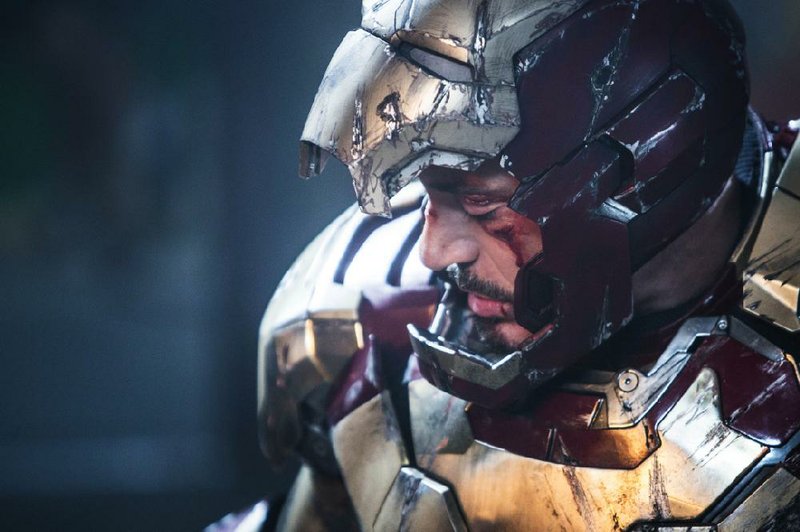 Just to be clear, despite their initial similarities, Iron Man isn’t at all like Batman, which is to say, even though both comic book series feature billionaire playboys who use much of their vast fortune to concoct unbelievably high tech gadgets and gizmos to aid in their fight against evil, Tony Stark and Bruce Wayne are about as different as human beings can be while remaining in the same species.

Whereas Wayne is all sturm und drang and Dark Knight this, and murdered parents that, Stark is a playboy who knows how to have a good time and pays untold sums of money in order to maximize it. Wayne is so psychologically tortured and grim, he never cracks so much as a faint smile; Stark spends the entirety of his life with a drunken permanent smirk plastered on his face.

This attitude filters directly into their filmic adaptations: While Christopher Nolan was helming a triad of lengthy and dour politicized diatribes for his caped crusader, the first two Iron Man flicks were thrown together by Jon Favreau, a former actor turned (mostly) action film mogul, and featured Robert Downey Jr. as an endlessly quipping wiseguy whose money and insane brilliance ensured he would never be seriously challenged. With the exception of the first act of the first film (an origin story adapted from Stan Lee’s original), the plots were mostly incidental, just various excuses to show off his shiny armor, fancy suits, gorgeous cars and his undimmed charisma as the magnetic center of every party he attends. 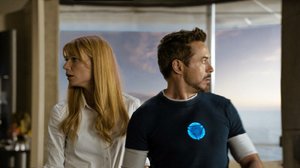 Thing is, you can only go so far with that approach: If all Stark ever strove to be was a fabulously wealthy good time Charlie in lethal plate mail, the films would quickly get tiresome (see Iron Man 2), no matter how much he reformed himself in order to be with his brainy former personal assistant, Pepper Potts (played by Gwyneth Paltrow). The suits at Marvel (and their new mouse overlords at Disney) noted this impending issue and decided to do something about it. For the third installment of the series, a new creative team was tapped. Shane Black (Kiss Kiss Bang Bang), a highly thought of screenwriter, co-wrote and directed the new picture, which finds Mr. Stark under considerabley more stress than we’ve ever seen before.

For one thing, he has become an insomniac and suffers from full-on panic attacks - a resident holdover from his space alien experiences in The Avengers. For another, he might have finally challenged the wrong enemy.

You see, the Mandarin (Ben Kingsley), a hirsute, glowering terrorist who speaks in an accent somewhere between Hunter S. Thompson and Charles Kuralt (“a-MUR-ican”), has risen up, striking fear in the hearts of Americans with frequent, inexplicable bombings and radical television broadcasts where he threatens more pain and punishment for Americans on their own soil, including the president.

After a bomb blast seriously injures Stark’s former bodyguard, Happy (Favreau), he makes the mistake of issuing a challenge to the Mandarin to meet him at his house, freely giving out the address. Next thing we know, the Mandarin is gleefully tearing down Stark’s playhouse. His fabulous Malibu ocean-side mansion is attacked by a fleet of helicopters and the entire thing crumbles into the Pacific. Down and mostly out, with only a severely stricken suit of mostly inoperable armor, Stark has to dig deep to solve the mystery of the Mandarin and regain some of that which he has lost.

On the surface, this can at first be seen as a darker vision for the franchise (“We create our own demons,” Stark gravely informs us in the opening voice-over), only the film is very quick to keep itself from tottering over into anything resembling brooding darkness - Stark is, after all, a man who can still speak a stream of bons mots in the throes of a panic clutch or while buried under rubble.

Because of its reluctance to put its protagonist in anything resembling actual distress, the movie begins to drag shortly after its engaging first act. As Stark inexorably finds ways to get back in the swing, the storyline begins to get sillier and sillier (admittedly, some of this is a conscious choice by Black, who has taken his opportunity behind the camera of a huge summer blockbuster to make a film, essentially, about the artifice of making such a film in the first place), and by the end, we are waist deep in the standard comic movie convention of a huge epic battle among a backdrop of girders, beams and many, many things that can collapse to the ground.

Along the way, Black has some fun with an armorless Stark still acting lethally brilliant (he coldly dispatches one enemy utilizing a combination of a ripped gas line and a sparking microwave oven) and infiltrating his enemy’s lair using nothing but weaponry he builds out of one trip to Home Depot, but none of it is enough to convince us Stark is ever in real peril. If Nolan’s Batman movies were too pompous and grandiose by half, at least they consistently put Wayne in serious jeopardy, even going so far as to kill his love interest. Here, when Stark’s ladylove appears to have perished, we instinctively know that won’t remain the case because, among other things, Black doesn’t have Downey even bother to act otherwise. The only dark shadows in this film come from the bright bulbs of the klieg lights all around the characters.

And while one could (should, even) take issue with the portentous nature of the politicization of the Batman saga - what with the attempted rise of the underclasses against the rich aristocracy and all - at least Nolan and his team made an attempt at digging deeper into our collective psyche. It’s worth noting that in Iron Man 3, the only vague attempt at creating a political subtext turns out to be little more than a giant hoax, a reality show to manufacture danger and dread in a world that’s already absolutely suffused with the stuff. Nolan might have pushed it too far, but that’s still better than just going back to the party like you never really left.