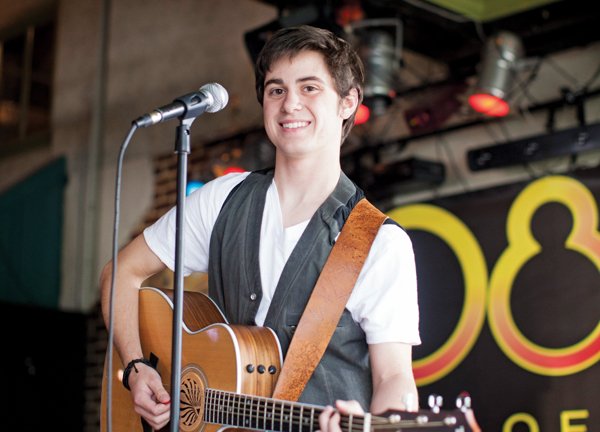 Alex Summerlin is a sophomore at Bryant High School.

At 16, Alex Summerlin is already a professional. A singer, musician and Bryant High School sophomore, he started playing guitar and singing, performing acoustic covers from the ’60s to today, at nightlife spots two years ago and can count credits at Cajun’s Wharf, Denton’s Back Porch, The Afterthought and Luigi’s.

Q: I’d like to begin at the beginning and ask how you first got into music. I mean, most every kid listens to the radio. Some pick up an instrument at some point. How — and when — did you figure out this was, uh, more than a feeling? (Sorry.)

A: That song will be stuck in my head all day now! My dad has always said I was 2 or 3 years old when he first noticed that I could just hear music and would repeat the sounds, the notes, where it was obvious exactly what song it was. I didn’t really learn to do it; it’s always just been there. Once I started to really hear music and pay attention, the words, the melodies I would hear just stuck with me somehow. When I was around 9 or 10 I started taking guitar lessons and within a couple of years I realized I could actually play and sing at the same time pretty easily and it went from there.

Q: I look at your set list, and I see everything from Bob Marley to Green Day, The Beatles to Mumford and Sons. It’s one thing to like and listen to such a spectrum, but I’m guessing it’s quite another to study and play it. Does that diversity come easy or is there a lot to learning it?

A: The more I like a song; the easier it is for me to learn. No matter what genre of music, whether it’s a band or a male or female artist, I just try to create versions of things that I like, and I think other people might enjoy hearing. The Internet makes it so much easier to learn; just type in a song and there are 25 versions of it to watch.

Q: On a related note, I’ve seen you playing mandolin as well as guitar on YouTube (Sumrln40). Is there much crossover there or what prompted you to pick up both? And do you play anything else?

A: The mandolin just always jumps out to me on a song. I love the sound of it. I should probably just focus on the guitar more, but I like to tinker with other instruments. I have some limited basic ability with the mandolin, the bass guitar and I can play some percussion from being a drummer in the school band at one point. I would not consider myself a really great player yet on any instrument including the guitar. It’s all a work in progress.

Q: I’m wondering what the “most played” list on your iPod looks like. What do you listen to? Is it the same as what you play?

A: It’s all over the place. There’s no doubt that I have some great guitar songs from bands like Guns N’ Roses and Aerosmith, but I also have some classic rock like the Stones and the Eagles on there. I like a lot of ’90s music like Matchbox Twenty and the Counting Crows, too, but mainly, when just hanging out, I listen to pretty current stuff like The Black Keys or The Killers, maybe some Maroon 5.

Q: You probably hate when people bring this up, but I gotta talk age. You started playing sets at, what, 14? And I’m wondering if you ever ran into issues booking with places that are 18 or 21 and up. I mean, there’s a photo of you in the gallery on your website (alexsummerlin.com) in which you’re playing in front of signs for Miller Lite, Coors Light and Shock Top. I’m guessing your friends didn’t get to see you play there?

A: Yeah, that’s a never-ending theme for me over the last couple of years. “How old are you?” is always the first thing people ask at a show. But it’s worked to my advantage, too, so I don’t complain. As far as booking a show, I always have to make all of that very clear that I am 16 on the front end. My parents sometimes have to literally stay with me when I’m not on stage. It comes with the territory for right now, and I’m careful to not create any issues for an owner. Some of the places I play are restaurants, so my friends can check those shows out.

Q: Still, at 16, you’ve already played a lot of shows. Enough, I think, that I can ask if there’s any one moment that stands out in your mind so far. Maybe it was someone you played with or met? Maybe it was the crowd? Does any one moment or show stand out as a real “wow” moment?

A: I’ve been fortunate and been able to do some cool things so far. But you know right now — every show has that one moment, when the room is full and I’m all into a song and giving it everything I have to tell the story, and then I’m done and the crowd is clapping and whistling and I look around and think — this is absolutely crazy, what is going on here. It’s awesome.

Q: Speaking of being seen, I’d like to get philosophical for a second. Sites like YouTube make it easier than ever to get yourself out there (dare I say “like Justin Bieber”), and reality TV is obsessed with talent shows. But, when access is so available, it seems like it’d be harder to stand out from the crowd. Even given your talent, how do you set yourself apart?

A: I’ve always had social media available so it’s a little different for me, but there are some great tools to use now versus a long time ago. I do think showing live performance clips on YouTube, Facebook and Twitter has been great for me with local promotion and it’s free. By showing live material, I think it helps show what I am really offering versus a produced demo track on disc. As a 10th-grader, I don’t know how much philosophy you want from me, but I think chasing fame is a whole different deal than creating music... but everyone has to play the game sometime because it’s so wrapped up together now.

Q: Lastly, I’d like to ask you to talk a little about who you are outside of music. Any other hobbies or interests? Anything you’re into in school? What do you do when you aren’t playing a gig or practicing?

A: I’m pretty average really. I try to do well in school. I like hanging out with my girlfriend and friends. I like watching movies. I enjoy fishing, especially trout, when I can get the chance. But most of what I do is music related; besides my playing shows around town, I play in our contemporary Christian praise band at my church in Bryant every week, and we also practice one night a week. I’ve got a buddy I write some original music with when we can get together, and I’m trying to put a full band together with some guys my own age but that has been difficult.

Alex Summerlin’s upcoming appearances include May 17 at Luigi’s and June 5 at Cajun’s Wharf. See a full schedule at alexsummerlin.com.