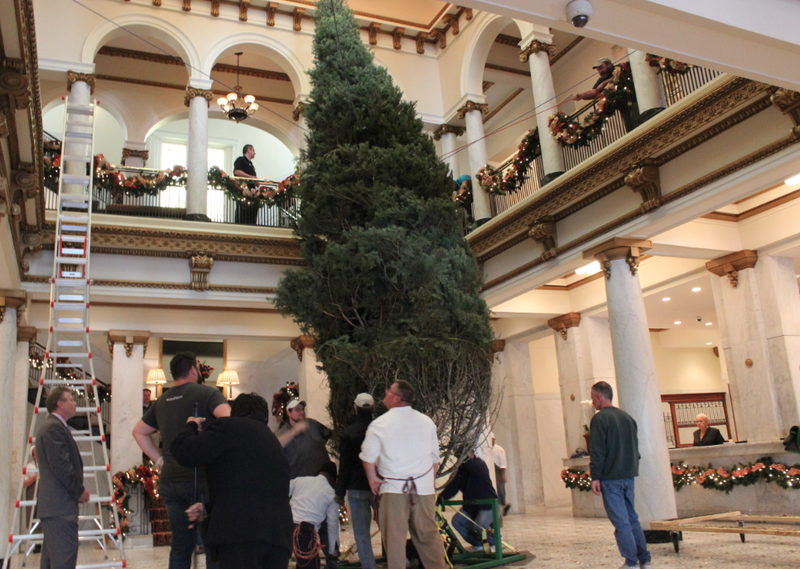 The Capital Hotel on Friday installed its annual lobby Christmas tree, a 28-foot white fir harvested by helicopter in Oregon and then delivered to downtown Little Rock.

About 20 workers maneuvered the 28-foot-tall, 2,500-pound behemoth through the lobby doors before methodically attaching a series of ropes and then carefully pulling them from the second-floor overlook.

By 11 a.m., the tree was upright and workers were trying to straighten it and push it into position in the very center of the lobby.

"Christmas is a time for community, and for us it's important," said Nick Bradley-Hole, director of rooms for the hotel. "We consider ourselves the front porch of Little Rock and everything in the South happens on the front porch, and so ... people make a pilgrimage to come down here and have their Christmas pictures by the tree and come and dine in our outlets."

Howard Hurst, owner of Tipton & Hurst Florist, said the tree actually measured about 32 feet when it was first harvested from an Oregon mountainside. Workers had to cut it down slightly for the installation.

Tipton & Hurst has installed huge Christmas trees for years, but this year's Capital Hotel tree tops them all, Hurst said.

"This is the biggest," he said. "Typically we've topped out about 20 feet, maybe 25 at most. But we've never done one this tall. So we're excited about it."

Once the tree is straightened, crews from Tipton Hurst will immediately begin adding approximately 15,000 LED lights and other holiday decorations. Usually they wait a day to let the tree branches straighten out, but the official lighting ceremony is only two days away. The event, open to the public, begins at 5 p.m. Sunday.

"This year we're going straight into getting the lights on," Bradley-Hole said. "That process will start today. And then the full decorating will start tomorrow in full earnest. And we'll probably finish by about 3, 4 o'clock on Sunday just before we get going for the official lighting."

A team of about 20 people at the Capital Hotel on Friday worked to bring in and then upright a 28-foot tall Christmas tree. (By Gavin Lesnick)
[View Full-Size]