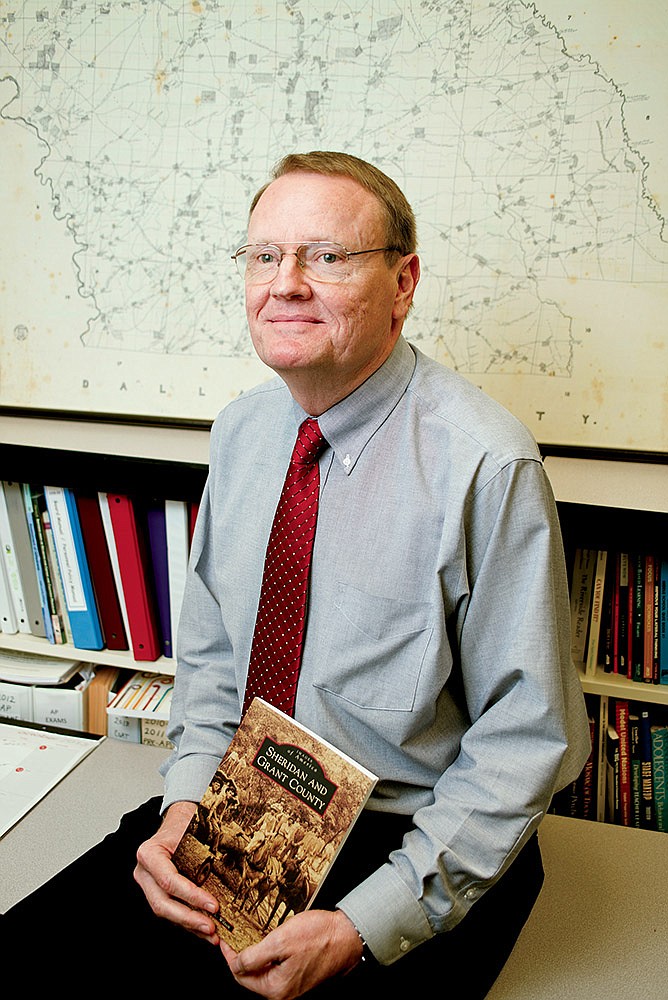 Roy Wilson is a longtime teacher in the Sheridan Public School District. His history lessons in the classroom have spilled over into a book he wrote titled Images of America, Sheridan and Grant County. His writing and pictures cover the subjects of his own ancestral beginnings, the legacy of the Civil War and Reconstruction.

Roy Wilson said he likes to look into the past, but his work has always been about the future.

For most of the last 40 years, Wilson was a teacher of American and Arkansas history in the Sheridan Public School District. He has taught students the principles and pitfalls of American government. Wilson has written books and papers about the Civil War, along with stories of distinguished Grant County citizens, the school system and most recently a presentation on the Battle of Jenkins Ferry based on the recently discovered correspondence of the Union officers engaged in the battle in 1864.

Yet, what could be considered impressive work, no matter how important it might be, is overshadowed by his current job.

“I seek talented students,” Wilson said. “I start talking to teachers when the students are in the second-grade. I don’t want anyone left out.”

Before he took over the Gifted and Talented Program in Sheridan’s schools, he said the students chosen to receive more challenging studies and special attention were selected by nomination.

“There used to be a wink and a nod about [which students were selected],” Wilson said. “At one time, we tested this student in the second-grade. He was dirty and looked unkempt, but he won the third- through sixth-grade spelling bee, and no one would have nominated him for the G&T program.”

Starting in kindergarten, the students are evaluated on their nonverbal skills, with the goal of one day placing them in AP (advanced placement) classes that go beyond ordinary high school classes and not only better prepare students for college, but can earn them hours of college credit.

Wilson said that the school AP teachers have saved college-bound students from Sheridan a total of $100,000 in just the past three years.

Along with college credit, Wilson said advanced classes were useful in giving students a great perspective on the world and themselves.

Like many good teachers, Wilson was also affecting the future of his community when he was a classroom teacher. Many residents of Sheridan have said their interest in history and government started with their classes with Roy Wilson. Wilson said the key to sparking that academic interest is to make class interesting.

“Try to keep the students on the edge of their seats,” he said. “I know when they are in the zone — not only learning, but getting excited about what they are learning.”

To do that, he said he plans ways to fill every moment the students have in his classroom.

“Make sure the classes offer value to the student,” he said. “It should be part of the culture now.”

A seventh-generation resident of Grant County, Wilson was born in Malvern and raised in Glenwood in Pike County.

“I never lived in Grant County until I moved here and got a job as a teacher,” he said. “But I visited here all the time seeing my grandparents and cousins.”

He said that growing up in small-town Arkansas was a peaceful and perhaps naive way of life. However, it gave him the security to run for town council when he was only 19 years old.

“I lost by 40 votes even though I had the newspaper’s endorsement,” he said.

He does admit that if he had won, he would have spent a lifetime in politics, and perhaps would not have been as successful as he has been as a teacher.

While he said he likes history but never had the “head for math,” he actually began his college time studying accounting.

“I had found I liked bookkeeping, but in my first accounting class I knew I was in over my head,” Wilson said.

He actually decided to become a teacher when some friends were filling out their paperwork for being advised about their majors.

“They had the forms for education majors and someone suggested that I liked history so I should be a history teacher,” Wilson said. “With noother idea in mind I filled it out.”

As to actually being in front of a classroom, he said he stopped being nervous around his 15th year of teaching.

“I decided to look and see what I could be doing that would take me to the top,” Wilson said, “and that was to make it interesting.”

He said he can see his success by the number of students who will come up to him and talk about how they enjoyed his class.

“I have had about 4,500 students and on occasion they stop me in Little Rock or here in Sheridan and say great things,” he said.

Having started as a high school teacher when he was only 20 years old, he said his oldest students are only a few years younger than he is.

Over the years, he has taught at every grade level in the school system. Most recently, he spoke to pre-K students about birds.

“I was the bird expert by doing enough research to be an expert for a preschool student,” Wilson said.

This teacher’s work has been recognized by more than his students. Wilson has been named the Arkansas Teacher of the Year, has received the Outstanding American History Award from the Arkansas State Society of the Daughters of the American Revolution, and garnered the State Educator Award for the Gifted and Talented. He has also been named Grant County Teacher of the Year and been recognized twice as Secondary Educator of the Year in the Sheridan Public Schools.

In 2012, Wilson published a book, Images of America, Sheridan and Grant County. His writing and pictures cover the subjects of his own ancestral beginnings, the legacy of the Civil War and Reconstruction. He has also created a Civil War Sesquicentennial desk calendar for 2014, using pictures of the Jenkins’ Ferry Battlefield area in Grant County. Wilson has signed his 40th one-year contract with the school system, and he said he is not yet ready to think about retirement.

He said he has not reached a point where he will be able to just call in one day and say his time as an educator is over, but Wilson still wants to see how some of the students turn out.

He will also be involved in the commemoration of the 150th anniversary of the Battle of Jenkins Ferry.

“We will get things fixed up around the battlefield and then invite the world,” Wilson said. Still thinking about the future.