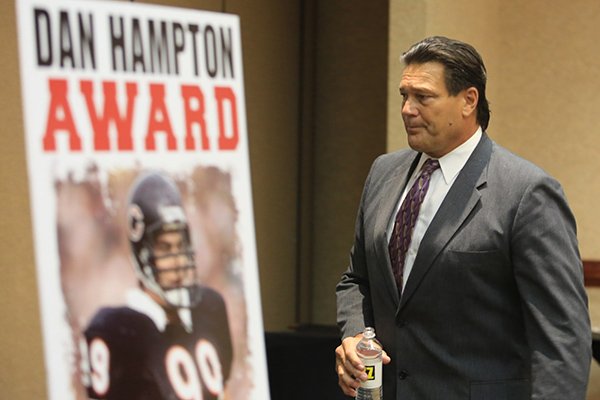 Dan Hampton knows a thing or two when it comes to pressure.

The former Arkansas Razorback played 12 years in the NFL and was a key member of one of the greatest defenses in professional football history, playing defensive tackle for the 1985 Super Bowl champion Chicago Bears.

So Hampton, 55, was pleased to see that the NFL has agreed to pay $765 million to settle lawsuits filed by thousands of former NFL players who developed dementia or other concussion-related brain disorders they say were caused by the violent collisions that fueled the sport’s rise in popularity and profit.

Hampton said Tuesday at the Little Rock Touchdown Club luncheon that the rise in chronic traumatic encephalopathy among former NFL players was impossible to ignore.

“We’ve been seeing this coming for five to 10 years with the CTE, the trauma to the brain,” the former Jacksonville High School football standout said of the class-action settlement, which was announced Thursday. “The NFL knows that there’s an800-pound elephant or gorilla, or whatever you want to call it. There’s something that has to be addressed.

“This is probably a big step by the NFL to acknowledge the fact that they were culpable at some point. How much? We don’t know yet. It still has to be played out. They’re trying to do the right thing, and I applaud them for that.”

Hampton enjoyed success throughout his college and pro football careers. He played four seasons at Arkansas (1975-1978), earning All-America honors in 1978.

The Bears took Hampton fourth overall in the 1979 draft, and he went on to become a six-time All-Pro selection and a four-time Pro Bowl selection during his 12-year career (1979-1990).

The highlight of his career came in 1985, when he was a member of a fierce defensive unit that led the Bears to a 15-1 record and cemented their legacy as one of the greatest defenses of all time by defeating the New England Patriots 46-10 to win Super Bowl XX in New Orleans.

The Bears, who led the league in fewest points allowed (12.4 per game) during the season, set Super Bowl records for sacks (seven),fewest rushing yards allowed (seven) and margin for victory (36 points).

The Bears knew early during the 1985 season they had something special on defense when Chicago went to Irving, Texas, for a preseason game against the Dallas Cowboys. Chicago won the exhibition game, and Hampton left town with a word of warning.

“They better have that cart that carries people off gassed up, because we’re coming back in November,” he said.

Just as promised, the Bears returned to Texas Stadium in November. Former Cowboys defensive back Everson Walls said early in the week that the undefeated Bears hadn’t played anybody leading up to the game. The Bears defeated the Cowboys 44-0.

“Everson Walls was right,” Hampton said following the shutout. “We’re 11-0, and we still ain’t played nobody.”

The Little Rock Touchdown Club announced Tuesday that it has created the Dan Hampton Award, which will be given to the top defensive lineman in the NCAA Football Bowl Subdivision. Hampton said he is flattered to have his name associated with such an award.

“It has a certain responsibility to it,” said Hampton, who was inducted in the Pro Football Hall of Fame in 2002. “You want to be exemplary. I’m like, ‘Wow, this is really amazing.’ ”

Hampton credited coaches Bill Reed at Jacksonville High School, Lou Holtz at Arkansas and Mike Ditka with the Bears for turning him into one of the top defensive linemen to ever play the game.

“All I can think about is how lucky was I to play 12 years in the mecca of football … and play for the greatest football team of all time,” Hampton said. “Everywhere I was, I was associated with people that wanted to be special.”