Shoes made for walking 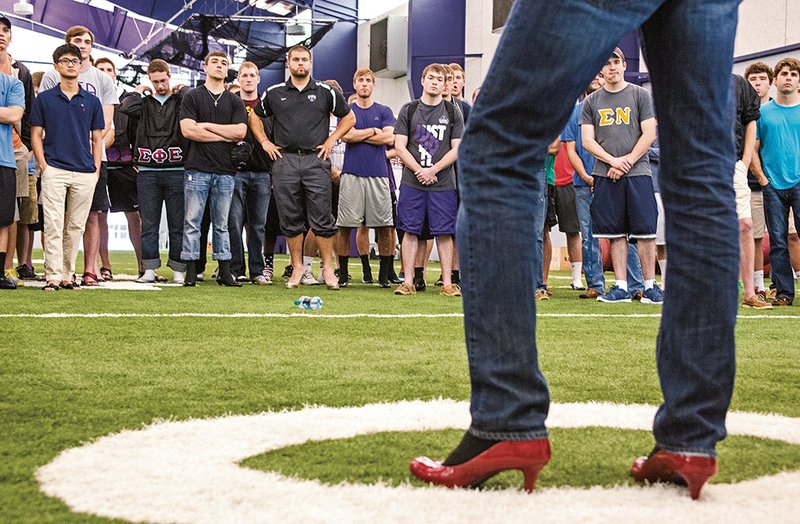 While sporting a pair of red high heels, Randy Young, president of the University of Central Arkansas Interfraternity Council, speaks to the crowd of participants in the Walk a Mile in Her Shoes event at UCA. The men’s march, part of a national event, is designed to stop rape, sexual assault and gender violence against women. The UCA walk was organized by the Interfraternity Council, the UCA Police Department, the Division of University and Government Relations, and Help for Abuse Victims in Emergency Need in Conway.

Jon Watson of Conway picked out shoes with the highest heels he could find to wear to walk a mile at the University of Central Arkansas.

“I had the tallest — they were golden heels, 6-inch, and I didn’t fall,” the 22-year-old said. “I was really surprised at myself. It was definitely hard to walk.”

Watson, a senior at UCA, was one of about 120 young men who participated April 3 in Walk a Mile in Her Shoes, an international march to stop rape, sexual assault and gender violence.

“A lot of people have a view of fraternity men in a negative light (referring to sexual assault), and that’s not the case,” Watson said.

A former UCA football player, Watson will end his term this month as president of Pi Kappa Alpha fraternity at UCA.

“We want to show [we are] able to get out there and express that we support the stand against sexual violence and sexual assault, and it should mean something to the rest of the men” who aren’t in fraternities, he said.

This is the third year for the walk at UCA, said Scott Isenga, director of fraternity life.

“Our event is unique,” he said, because Walk a Mile in Her Shoes events aren’t often held on college campuses.

The event started in 2001 in California with a small group of men who put on women’s shoes and walked around a park, according to the website www.walkamileinhershoes.org.

The Interfraternity Council has been involved in the UCA Walk a Mile in Her Shoes since its beginning, he said, along with the UCA Police Department and the Division of University and Government Relations. Help for Abuse Victims in Emergency Need also assists with organizing the walk.

Isenga said the Interfraternity Council does most of the organizing and planning for the walk. Last year, the council paid for the shoes.

This year, he said, the UCA Student Government Association provided funding to buy the high heels and pay the $150 to register with the national Walk a Mile in Her Shoes organization.

“I think for our men, the big thing is that there is always a stigma of sexual assault and gender violence, but especially with fraternity men,” Isenga said.

The event is “to raise awareness for one thing and to show that the men — they want a community where sexual assault and gender violence are not a problem. They want to show people they are different and support ending those things,” he said.

For the first time, the Interfraternity Council made donations, $500 each, to HAVEN and the Sexual Assault Crisis Response of Central Arkansas, both in Conway.

“We wanted not only to talk the talk but walk the walk,” Isenga said.

The money came from the council’s dues, which every fraternity pays.

HAVEN is a residential facility for females ages 6 to 18 who are in foster care because of abuse, neglect, truancy or other reasons.

Marti Jones, executive director of HAVEN, said this is the first year she has served on the walk committee. She said the event surprised and impressed her.

“It was great. I was really shocked at how many guys showed up; I was really impressed with that,” Jones said. “All these shoes were laid out, and all these guys were on the ground trying on these platform heels.

“It’s always exciting watching young people take a stand and try to do something about an issue, so it was fun to watch.”

Jones said the $500 donation was a surprise, too. It will go into the bank to help with HAVEN’s day-to-day operations, she said.

“Our community should be so proud of UCA and the initiative they are taking to make our campus safer,” Vincent said. “I’ve watched it since I’ve taken this job. If my kids were to go there, I’d feel good about what UCA is doing. They’re proactive, and they have a counseling center” that’s available to students, she said.

Vincent said the sexual-assault crisis center rarely receives donations, so the $500 was welcome. It also raises awareness for the center and the subject, she said.

Isenga said the goal for the future is “hopefully to start up some sort of fundraising initiative next year and have every fraternity raise funds [for the event].

“We really want to raise awareness and to show that the men want a community where sexual assault and gender violence are not a problem.”