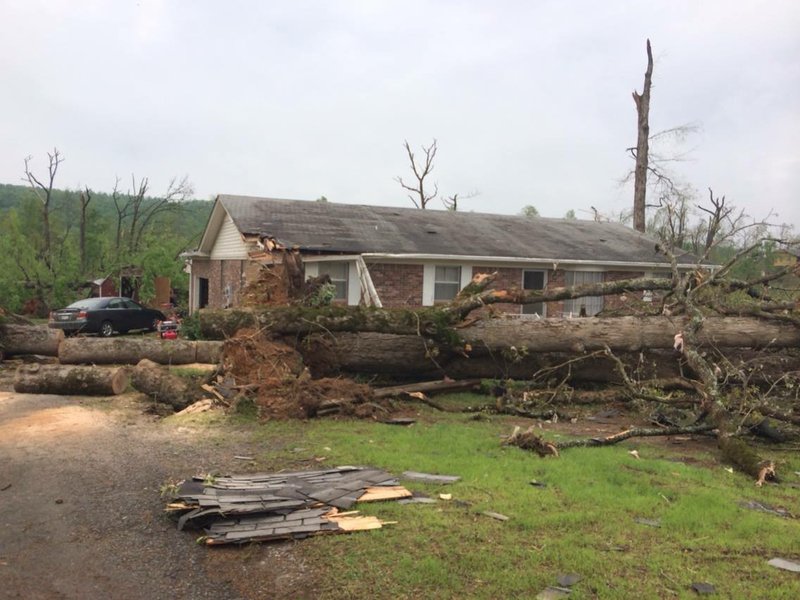 Mike Hendrixson, Paron resident and the owner of the home pictured, said Sunday night's storm damaged his home, barns and other property. He and his wife took shelter in an interior bathroom in their home during the storm. ( Lisa Burnett)

Mike Hendrixson and Chuck Henninger of Paron recollect on Sunday's storm that swept through their community. Both men had damage to their property. (By Lisa Burnett)
[View Full-Size]

Mike Hendrixson, who has lived in Paron for 40 years, said nothing like this has ever happened to him.

While Hendrixson and his wife were watching the Sunday night news about the weather, he said, he heard a “roar” coming toward his house.

“We looked out and the wind wasn’t blowing that much, but I could hear [a sound] like a train,” he said. “We’ve got a bathroom in the center of the house with no windows, and I said, ‘Let’s get in there.’”

The couple took cover in their bathroom, and said they could hear the tornado coming their way.

“I told here there was a tornado coming, because I could feel it. Our ears felt like they were popping [from the pressure],” he said.

About 30 seconds later, Hendrixson said, the storm had passed.

Though the two were left unharmed, the couple’s property wasn’t.

Hendrixson has two houses, both of which are damaged, along with his barn and trailers.

“My tractor and my four-wheeler are under the barn,” he said. “I don’t know what else under there is damaged.”

His main house’s roof is damaged, but he said it is livable.

“We don’t have any water right now because we’re on a well, but, we can survive in the house,” Hendrixson said.

The community has come together to help those who had damage to their homes and property. Hendrixson found items on his property that didn’t belong to him.

"There’s a teddy bear laying up on my front [porch] and a doll — we don’t have any children,” he said.

Though the damage is extensive, Hendrixson said, he’s hopeful about the future.

“It’s going to be a job, but we’ll get it repaired,” he said. “We’ll make it. God will see to that. He protected us. We’ll probably get a storm shelter now.”