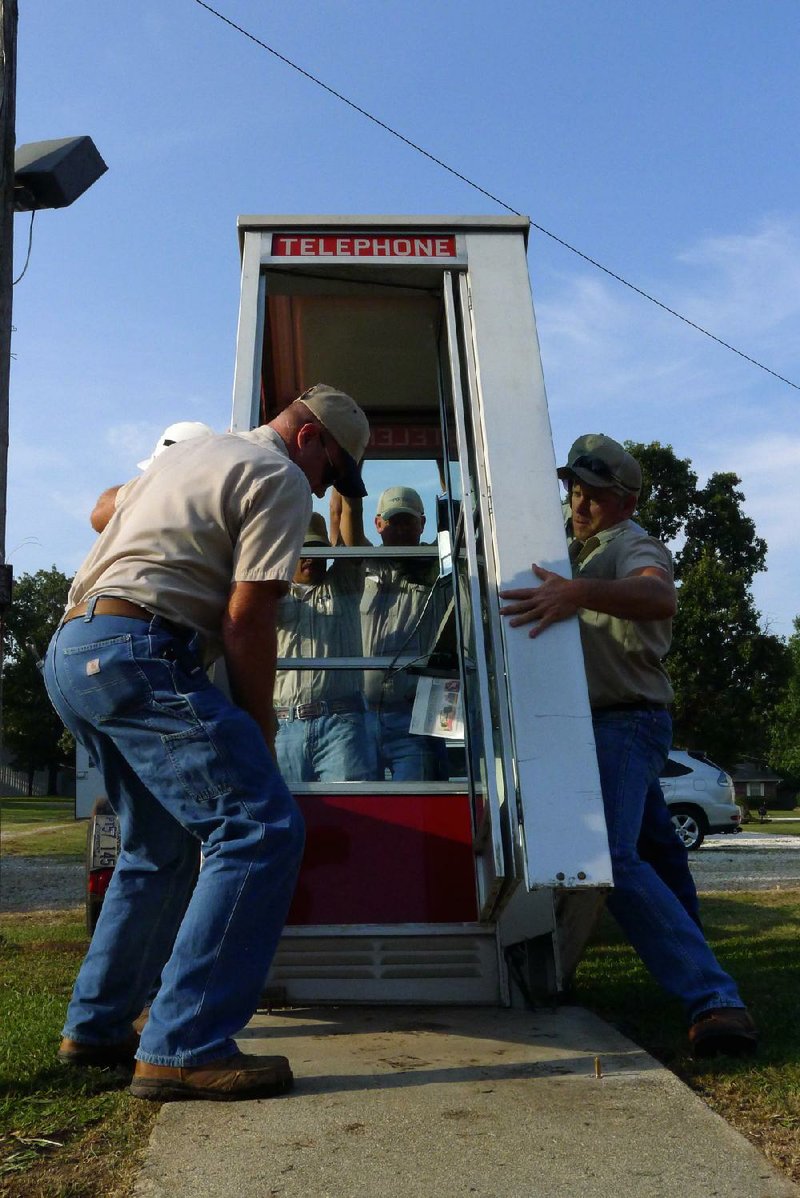 Workers for the Prairie Grove Telephone Co. put the phone booth back in place Tuesday in front of the Colonial Motel, where it had sat since 1959 until it was knocked down by an SUV on June 7.

PRAIRIE GROVE -- The Prairie Grove Telephone Co. reinstalled its last remaining phone booth Tuesday in front of the Colonial Motel across from the entrance to Prairie Grove Battlefield State Park.

There were still skid marks across the concrete base.

The phone booth, which had been in place since 1959, was knocked down June 7 by a sport utility vehicle that strayed from U.S. 62. Driver Mary Cantrell, 67, told police that she fell asleep at the wheel after staying up all night to get ready for a yard sale.

Company President David Parks said he debated whether to repair the phone booth, which yields about $2 in quarters every six months. He was persuaded to do so after the phone booth became a cause on the city's Facebook page. Even Secretary of State Mark Martin, who is from Prairie Grove, lamented what was thought to be its demise.

"It was one of the many, many small things that makes Prairie Grove special to us," Martin wrote.

The campaign to save the phone booth got so much attention that it ended up in a New York Times article on July 4. The article by Dan Barry was titled "A Town Won't Let Go of a Coin-Drop Line to the Past."

Parks said the booth was once popular for telephone calls.

"We used to empty it twice a month back in the '70s," said Parks. "Sometimes it would be stopped up with coins. That doesn't happen anymore."

Half a dozen workers pulled the phone booth from a flatbed trailer Tuesday morning and propped it upright. It was bolted into place and wired to operate.

But then it wouldn't take a quarter. The problem was quickly repaired, and Prairie Grove Mayor Sonny Hudson became the first person to place a call from the renovated phone booth.

"I said, 'Becky, I'm calling you from the phone booth,' and she said, 'Cool! The caller ID says PG Telco."

Hudson said it was a good day for Prairie Grove and its telephone booth, which these days attracts mostly tourists who want to pose for pictures beside it or while pretending to make phone calls.

"Everybody thought it may be lost when it got hit," said Hudson. "But it's back."

Patrick Smith, a construction supervisor with the telephone company, said 12 panes of glass were replaced in the booth, all with tempered glass. The cost for materials was less than $500, he said.

The red panels in the booth were cleaned, and instruction placards on the front were replaced. It also got a new phone book.

Workers buffed the aluminum sides of the booth to remove graffiti, but much of it remained.

Guy Matthews said the phone booth was there when he bought the Colonial Motel 40 years ago. He remembers one night when a man in the phone booth had a heated argument with someone. He slammed the receiver down several times, then stepped outside the booth and fired a gun in the air several times.

"I don't know what that was all about," said Erma Matthews, Guy's wife and co-owner of the motel. "That was unusual. It's not violent out here."

Parks said the company still has 15 pay phones, down from 42 a decade ago, but only one is in a booth.