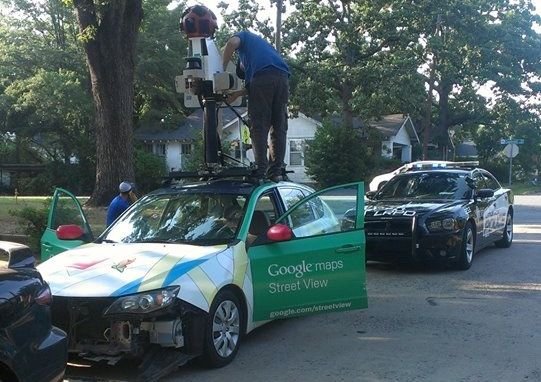 A Google Street View driver checks his equipment after he hit another car while trying to turn onto Cantrell Road on Wednesday evening.

A Google Street View vehicle crashed into a Sherwood man’s car on Cantrell Road in Little Rock around 6 p.m. Wednesday.

The Street View car was driving the wrong way on Tyler Street, then U-turned and attempted to merge onto Cantrell Road, when it side-swiped another vehicle, a Little Rock police officer at the scene said.

The driver of the Street View car, identified as Alexander Spurr, 29, of Bryant was cited for careless or prohibited driving, according to the accident report. The estimated damaged to the Street View car was $1,500. Spurr was not injured during the crash.

The driver of the other vehicle, Dylan Case, 22, said he was "shaken up" after the crash and accused the driver of Street View car of running red light while trying to turn onto Cantrell Road.

"I was just coming down Cantrell in the far right lane, and the guy just blew right through the stop light and hit me," Case said Thursday. "I spun around into the middle of the road, and I always hold the emergency brake when I'm riding and I had to pull the emergency brake or another truck would have hit me head on."

Case said he later went to the emergency room for purported neck and back pain and bruised ribs. The estimated damage to Case's car was $2,000, according to the report.

"Something better come out of Google's pocket for this," Case said.

This is not the first time a Street View car has crashed while documenting streets. In September, a single Street View car was involved in three separate accidents in Indonesia after the driver repeatedly fled the scenes of accidents, ZDNet reported. 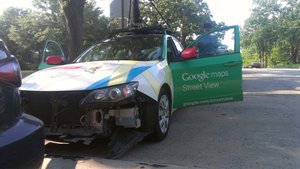 Photo by Ashley Nerbovig
A Google Street View car was damage after hitting another car while trying to turn onto Cantrell Road on Wednesday evening.

An earlier version of this story incorrectly stated the Street View vehicle was traveling the wrong way on Taylor Street instead of Tyler Street. The change is reflected in the version above.