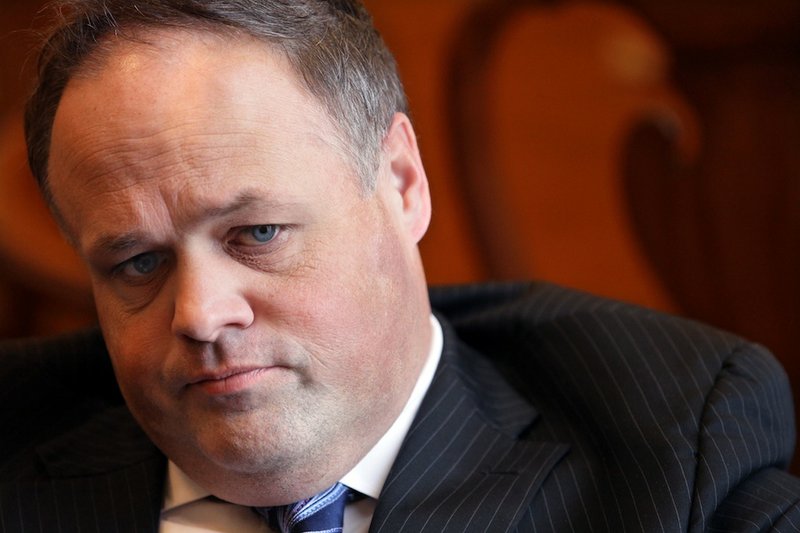 Lt. Gov Mark Darr tells reporters Tuesday that he has no intention of resigning after ethical violations surfaced last week.

Darr, who has held the post since January 2011, announced the decision at 6:30 p.m. Friday in a statement from his office.

Several officials, including Democratic Gov. Mike Beebe and all five Republican members of Arkansas’ congressional delegation, candidates for statewide office and state legislators have called for the lieutenant governor to resign after Darr acknowledged 11 violations of state ethics laws and regulations.

In a written statement Tuesday, released before a round of media interviews, Darr called the violations "an oversight" and said he had “put a stake in the ground” by not resigning from the post, the Arkansas Democrat-Gazette reported.

“Not for this office, not for the title or the job, but I put a stake in the ground for those Arkansans who are sick and tired of these type of political games and the people who play them,” Darr said. “It would be an immediate fix to tuck tail and run, but I would regret it for years to come.”

Following Darr's statement Tuesday, House Speaker Davy Carter, R-Cabot, issued a statement that he would consider appointing an adhoc committee to make procedural recommendations to the House Rules Committee if 51 of the House’s members decide to pursue impeachment.

Several Democratic and Republican state legislators have said they would pursue the impeachment process if Darr didn't step down by the Feb. 10 start of the fiscal session.

No one has ever been impeached in Arkansas under the current constitution, written in 1874, Carter said.

Darr on Dec. 30 agreed to pay an $11,000 fine in 30 days, a requirement in the panel's settlement offer, and wrote in a two-page letter that he didn’t believe he ever “intentionally took money that was not owed to” him.

It is my great honor to be the Lieutenant Governor of Arkansas. This office has allowed me to meet so many wonderful Arkansans over the past few years. My family and I are forever grateful for the support the people of this great state have shown us for the past few years and during this extremely difficult time. We have learned that difficult days demand decisions of faith.

Throughout this process, it has been my desire to share the facts, and I feel this has been accomplished. I have been honest, forthright and acted with integrity. I made mistakes, but not one with malicious intent.

Effective February 1, 2014 I will resign as Lieutenant Governor and I submit that resignation to the people of Arkansas, not an elected official. I have spoken with Speaker Carter and Senate Pro-Tempore Lamoureux to notify them of this decision. They agree with me it is in the best interest for me, my family and the state at this point. I respect these two men for their concern: not just for the state but for me and my family.

Politics can be a toxic business. I will no longer subject my family to its hard lessons. All my forgiveness to those who play the games and all my respect and appreciation to those who serve with class and humility.

Michael Wickline contributed to this story.