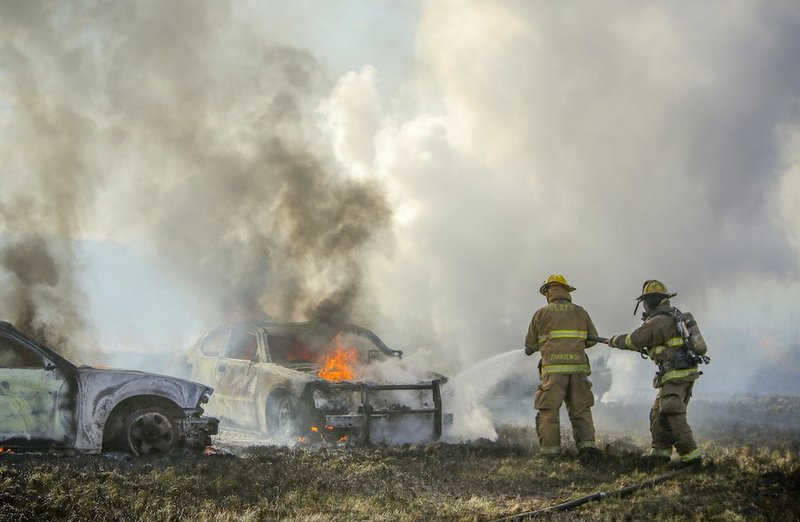 North Little Rock firefighters put out remaining flames inside two police cars that burned to the ground, along with the truck that the officers pursued, in a field behind Alliance Parts Warehouse at 600 Fiber Optic Dr. in North Little Rock on Monday afternoon. The driver of the truck led police from multiple jurisdictions on a chase that started in Grant County and ended with the suspect running on foot. Heat from the vehicles on the dry grass in the field purportedly started the fire, which spread over 10-20 acres before being contained.

A police chase that began in Grant County on Monday afternoon ended in Pulaski County with three vehicles and a field in flames.

The chase began shortly after 2 p.m. when a Grant County sheriff's deputy pursued a suspicious truck, according to Grant County Chief Deputy David Roberts. The truck, which had three occupants at the time, purportedly attempted to run over the deputy as it sped off.

A chase ensued through Redfield in Jefferson County and continued north on Interstate 530. Redfield police and the Arkansas State Police joined the chase, which continued onto I-440 and ended just off Fiber Optic Drive in southwest Pulaski County after law enforcement used strip spikes to disable the truck's tires.

The truck then traveled into a field and the grass caught on fire, causing severe damage to the truck and two police cars belonging to the Redfield Police Department and Arkansas State Police, Roberts said. No injuries were reported, and it wasn't immediately clear how the fire started. Roberts said he was also unsure about what time the pursuit ended.

The three occupants of the truck were taken into custody and brought back to Grant County for questioning, but they have not been officially charged in the case, Roberts said. They are currently being held in the Sheridan jail and could face charges of aggravated assault and felony fleeing out of Grant County.

Roberts added that additional charges could come from the other law enforcement agencies that were involved in the chase.