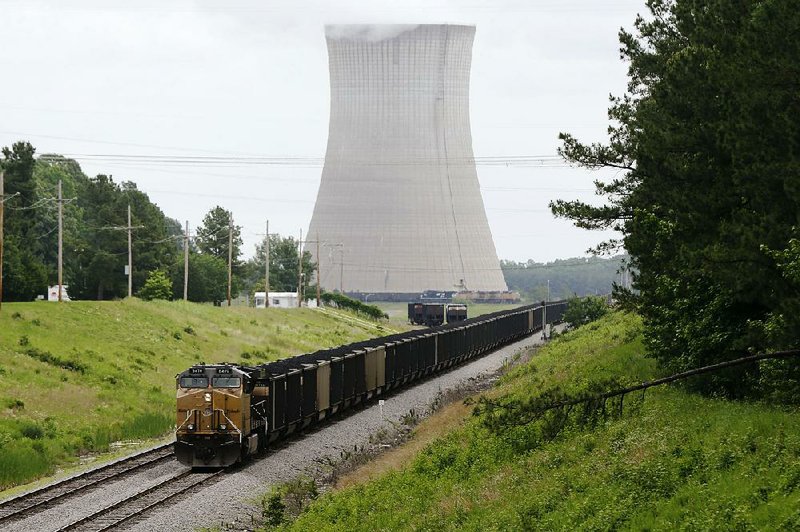 Correction: The Flint Creek coal-powered plant near Gentry has the capability of generating 528 megawatts of power. The plant’s capacity was incorrectly described in this article.

Arkansas faces a higher hurdle than other states and its residents won't see a benefit from pollution standards proposed Monday by the U.S. Environmental Protection Agency, an environmentalist and critics of the proposal said Monday.

The EPA said in a 645-page proposal Monday that it wants to have carbon emissions reduced by a nationwide average of 30 percent by 2030.

But for Arkansas, the EPA proposes a 44 percent reduction of carbon emissions by 2030, according to Glen Hooks, a senior campaign representative in Arkansas for the Sierra Club.

The EPA calculated that in 2012, Arkansas' five coal plants emitted 1,640 pounds of carbon dioxide per megawatt hour, Hooks said. That needs to be reduced to 910 pounds by 2030, Hooks said.

"That's pretty significant," Hooks said. "Some states are coal-heavy, like Arkansas, where we have some opportunities to do some more work. A lot of states have newer power plants and less coal, and they've invested in clean energy. We've not done that. So we have a little bit further to go."

The EPA says Arkansas gets nearly 44 percent of its energy from coal, followed by natural gas at 26 percent, and nuclear power making up nearly 24 percent. Hydroelectric power and other sources also supply the state.

The EPA will issue its final rule in June 2015, and the states are required to turn in their plans for reducing emissions by June 2016, said Teresa Marks, director of the Arkansas Department of Environmental Quality. There are provisions that allow states to extend their deadlines for final plans by one or two years, Marks said.

From 2020 to 2029, Arkansas has to meet a three-year rolling average of 968 pounds of carbon dioxide emissions per megawatt hour, said Chuck Barlow, Entergy Corp.'s vice president for environmental strategy and policy. Then in 2030, the 910-pound level must be met, although it is possible the deadline could be extended to 2033, Barlow said.

"The goals are very stringent," Barlow said. "There are a lot of questions that Entergy still has about how [the EPA] got to these numbers."

A statewide reduction of emissions by 44 percent doesn't mean each plant must reduce carbon emissions by that percentage, Marks said.

Reductions might come through energy-efficiency programs or regional planning with other states, Marks said.

"There are a wide variety of ways that we could actually meet the standards," Marks said.

Arkansas already has done some preparation for meeting the EPA standards. Last week, the Department of Environmental Quality and the Arkansas Public Service Commission held a meeting to discuss the effect regulations could have on the state's power plants. The state hopes to have representatives from different groups participate in the discussions, including from the electricity industry, consumers and the state's Department of Health, Marks said.

"One of the issues is reliability," Marks said. "The EPA wants to be sure that there will be a reliable source of energy in place. This will be a long, complicated process."

Greenhouse-gas emissions are a global issue and not just a state-by-state issue, said Venita McCellon-Allen, president of SWEPCO. Economies such as China and India use coal to produce electricity to keep their energy supplies affordable and reliable, and they don't establish emission standards, she said.

The EPA standards can penalize a state like Arkansas, McCellon-Allen said.

"They make Arkansas consumers pay higher [energy prices], and it will not make a difference [globally] at the end of the day," she said.

Duane Highley, chief executive officer of Arkansas Electric Cooperatives, said in a prepared statement that it was disappointing that the EPA guidelines "will reduce our use of coal, which is our most economical and reliable fuel to generate electricity."

"Although the proposed rule leaves the precise implementation details to the states to develop, the inevitable result will be the use of more expensive fuels, such as natural gas," Highley said in the statement.

Entergy is not considering legal action over the guidelines, Barlow said.

"But there are a lot of hard legal questions," Barlow said. "It's likely that that is going to be tested."

Sen. Mark Pryor, D-Ark., said he had "serious concerns" that the EPA proposals would undermine affordable and reliable electricity in Arkansas.

Rep. Tom Cotton, R-Ark., who is running against Pryor for the Senate seat he holds, said Pryor has done nothing to stand up to President Obama's "job-killing, rate-hiking regulations." Cotton said he will sponsor a bill to block the EPA's power-plant proposal.

"The power plants regulations announced by the EPA will have a devastating impact on Arkansas' economy," Cotton said.

Bruce Westerman, a candidate for the 4th District congressional seat, said the EPA guidelines represent "an unfair attack on the pocketbooks of hardworking Arkansas families."