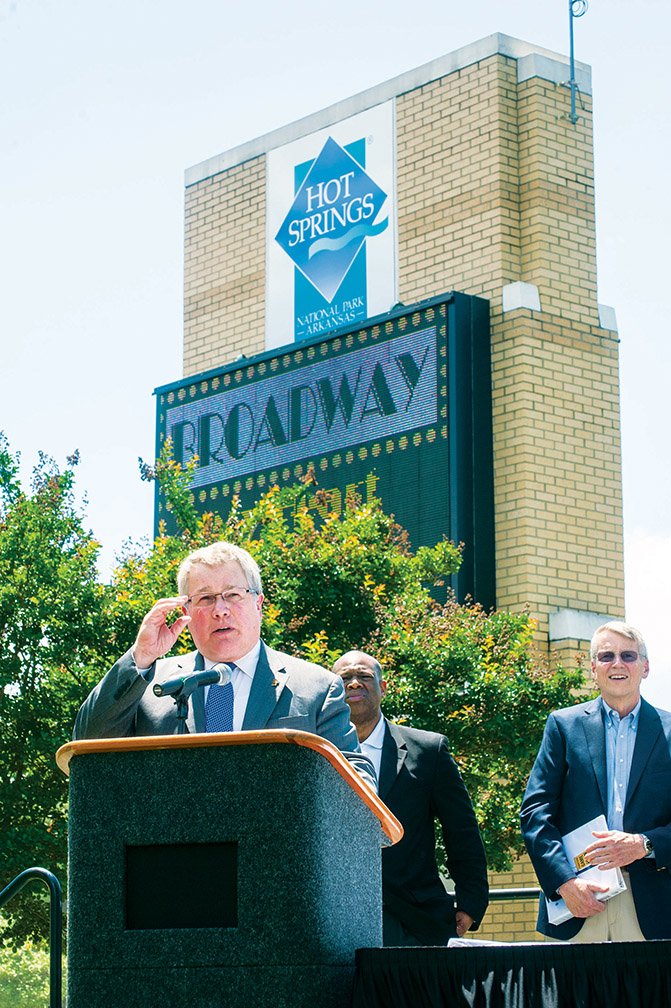 Greater Hot Springs Chamber of Commerce and Hot Springs Metro Partnership Executive Director Jim Fram speaks to a crowd gathered for a press conference Wednesday at the Hot Springs Convention Center plaza to discuss the results of the Downtown Game Plan Task Force that mulled ways to preserve downtown and the historic buildings that make the area vibrant and interesting.

HOT SPRINGS — Members of the Downtown Game Plan Task Force and others in Hot Springs said the first priority in the plan released at a press conference Wednesday for the revitalization of the city’s downtown is to hire a director of economic development dedicated to managing plans for building a strong downtown.

“It will be good to have an economic-development professional working for the downtown,” Hot Springs City Manager David Watkins said. “We will need someone who can work development deals that need a lot of hand-holding, to create packages the bankers like.”

The city manager said he and the city’s economic-development personnel cannot give what he called the “24-7 attention” needed to revitalize the downtown area.

The findings and recommendations from a four-month study by the task force were announced on the lawn of the Hot Springs Convention Center overlooking Central Avenue.

“We have looked at a couple of people, some from in town and some from outside,” he said after the news conference. “We need someone with high energy, who can have the vision to see what’s needed now to achieve want we want to do down the road. That’s more important than if they are from Hot Springs or not.”

Fram said the report by the task force presents achievable goals for a “rebirth” of the Spa City’s downtown.

“The report is a distillation of many hours of work by the task force, our staff and a crew of researchers,” he said. “We intend for this document to truly be a working document that will be updated and improved as more people become involved.”

Bryan Smith, chairman of the chamber’s board of directors, told the the gathering of city leaders, property owners, merchants and other downtown stakeholders that the task force has exceeded his expectations.

“They listened to a lot of people, read through all the old reports on downtown and economic development, and worked their way through tons of data,” Smith said. “I am proud of the group for the work they did and proud of their report.”

Along with calling for a separate economic-development director, Smith read six other “immediate action items” that the task force recommended:

• Encourage the city to implement compliance of the new Thermal Basin Fire District ordinance with expressed flexibility to those property owners who are working to meet the new requirements;

• Create a Downtown Investment Fund that would be funded by investing stockholders, with the fund formed to enable the purchase, management, remodeling, development, leasing and sales of selected properties located within the boundaries of downtown Hot Springs; and

• Begin regularly scheduled forums for downtown property owners and tenants to share thoughts and ideas, and to detect issues that may need to be addressed and remedies pursued by HSDI, the chamber and other organizations.

Watkins addressed one of the items after the news conference. He said the city needs to make greater efforts to support the needs of Hot Springs National Park.

“We have to make a commitment to lobby for the national park, which I understand we have not really done in years,” the city manager said. “We need to talk with the National Parks Service to show our support that the park gets what it needs, and also to sell the city to those who would help fund the improvements.”

Josie Fernandez, superintendent of Hot Springs National Park, looked through the pages of the report after the news conference.

“I have never seen any of this information before,” she said. “The park or the National Parks Service was not involved in drawing up the report.”

She said she would check the recommendations, looking for opportunities and challenges, but that the park management and the parks service are supportive of bringing new business and new life to downtown Hot Springs.

“Whatever way we can contribute, it stands to reason that we’ll cooperate,” she said. “If there is something we can’t do, we’ll work with everyone to tell them why we can’t and then work together for the community to succeed.”

The task force was called together following the fire that destroyed parts of the Majestic Hotel, a landmark of the town’s past. Corey Alderdice, a member of the task force and director of the Arkansas School for Mathematics, Sciences and the Arts, said the fire created an atmosphere in the city that focused everyone’s attention on downtown.

“I don’t think there would have been the same level of energy and passion about downtown in the community before the fire,” he said. “It gave a new perspective to the issues that divided the stockholders and helped them get together and move the process forward.”

Watkins agreed, saying the Majestic fire united people in the community with a fear of what could happen to other old and treasured buildings downtown. He said now is the time to act on redevelopment.

“We have a lot of political capital in this,” Watkins said. “It sets a whole new tone to things, so it is time to tackle flood control, fire, and rock- and dirt-slide dangers. FEMA did an extensive study about this some years ago, and it has just sat there.”

With the February fire at the old hotel being so extensive, the city razed one of the hotel’s main structures and condemned the rest. Bricks from the destroyed structure are still at the site, and the Arkansas Department of Environmental Quality has given the owners of the property 60 days to clear the rubble and explore the site for environmental hazards, then submit a plan for dealing with any problems.

A statement released at the news conference said the union of the nonprofit Downtown Hot Springs Initiative with the Metro Partnership would become a “growing downtown alliance” that would manage the new director of downtown development.

“The alliance will pursue financial assistance and expertise from the [Environmental Protection Agency], FEMA, the National Parks Service and the Arkansas congressional delegation to create a downtown investment fund and to hold forums for downtown property owners,” according to the statement issued by the chamber.

“It’s an exciting plan,” Smith said at the end of the news conference. “It is good to know it is going forward.”

To see a body of the plan and a map of the boundaries designating the downtown Hot Springs area, visit the city’s website, cityhs.net, and click on the “Community” page.